Look at This Picture

Let’s all jump on buses, party hardy all the way to Mexico, thousands of buses, school buses, greyhounds, private vehicles—might have to throw some trains in the mix, that’s how I envision it. Take your backpacks, this is like #The Amazing Race.

When we get there, there will be no stopping us., we’re jazzed. We’re ready to take no prisoners. We’re citizens and we aren’t going to allow this action anymore. No child will be separated from their parents on our watch.

Yes and save your tickets, and your gas stubs, and send them to the White House. They won’t pay them, of course, but it will create a mess for them to clean up the way we need to clean up theirs.

Hey, we’re trying to run our lives here, clean up our act, become successful, happy individuals, and you keep throwing a monkey wrench into the mix. Shame on you.

On the day after Trump’s inauguration, almost three million people marched in protest of his election. It was triple the size of his inauguration crowd.

A lot of good it did.

Protests do work. But boy, they takes guts and tenacity by many people.

Since the 60”s, I’ve had the privilege to see this:

(A kid in our home was expelled from high school for growing a beard. They should have applauded him.)

I get teary-eyed remembering this event:

Our family jumped on a bus with a load of other lively souls, and were driven out to the desert of Southern California where we joined hands with millions of other Americans to form a chain across America. 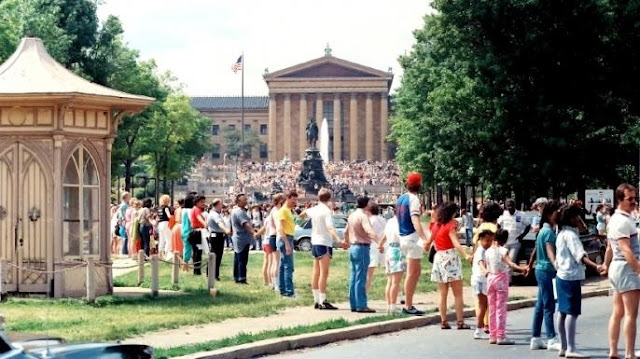 Credit Hands Across America.
“We are the world We are the children We are the ones who make a brighter day, so let's start giving.”

Hell's Angels and nuns, Elvis Impersonators, Abraham Lincoln Impersonators all stood together as one. And I read that to fill some of the gaps; farmers had their cattle stand hoof-to-hoof.