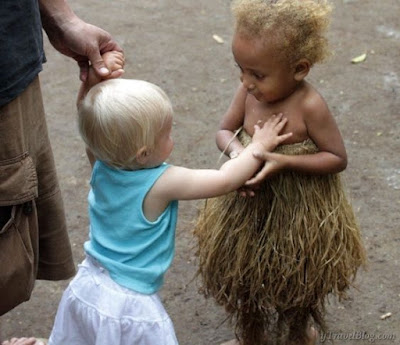 Craig and Caz Makepeace's little one greeting a friend.


“I wouldn’t live next door to a US citizen,” said a lady from Iceland.

“Because they don’t take care of each other," she said. "They don’t care.”

This was from the Michael Moor movie, Where Shall We Invade Next?

How about you? I believe you care. All around us people care. However, we have become fractured from each other. People don’t know their neighbors. And sometimes it appears we need an invitation to be friendly.

One time in London, I was looking for a glass blowing shop I had seen advertised in a shop window downtown.  I asked a distinguished-looking elderly British gentleman for directions, and he transformed from his apparent conservative nature into an animated direction pointer. He went out into the middle of the street to direct me.

Here is an invitation.  Join the party.

If you’re anything like me, you’ve had dreams of traveling.  I’ve done a fair amount of it, so, I can speak with some authority on how the Acropolis shines at sunrise and how the sound of the cicadas of Greece drift on the breeze and appear to vibrate the air as you approach an island.

I have wondered how it would be to travel with a daughter and her child (I have a seven-year-old grandson). What sort of education would that provide for the child? Would he become a child of the world? Would he learn to understand and be tolerant of various cultures? Or would he be bored out of his skull, and whine to go home?

#Caz and Craig of #YTravelblog.com travel full time with their two girls, around four and eight years of age.

It's hard to form lasting friendships Caz says, but their girls are quick to make friends and are open and eager travelers. Caz provides a wealth of information on their site, and she encourages travel bloggers.

“If it encourages a few people to broaden their mind due to the stories and photos they post then please, let’s have a few more of them.”
--Caz Makepeace

However, I am not one who travels full-time, Nor am I one who travels much anymore for that matter. I say that. I think I am home-bound, then I  take off for four days to San Jose California to attend a live event with Tony Robbins.

That was a broadening experience.

A mini-vacation can do wonders for the spirit.

Getting away, having time to one’s self—time to broaden your horizons, to learn new coping skills, that is often the reason we leave home and hearth to settle into someplace new, or remote, or different.

I think of Anne Morrow Lindbergh going off to a beach cabin and since, she said, she thinks better with a pen in her hand, she began to write. The result was her book Gift From the Sea. Now there is a  50th-year-anniversary issue, and Morrow’s book is as pertinent now as the day she penned it. Women try to find balance in a chaotic world, they try to juggle a home husband, children, finances, food, cooking, home repairs, taxiing the young ones to various events. Whew. And all along they are trying to find grace.

No wonder people are busy, and find is difficult to connect.

That is my purpose here. To connect, and to offer a reprieve from the hamster wheel.

It is my purpose to offer inspiration to go for your dream whatever that might be. Is it to travel? To begin a business? Write a book? Take painting lessons, or would you like to take your easel out to the beach and paint the birds? Perhaps we can find, that maybe, just maybe you can unplug and live the life of your dreams.

We are, after all traveling-thru-life.

And as Caz says:

“Life’s ultimate goal is to make money doing what you love in a way that serves.”

When I came home from California, I realized that whether we travel far or near, we are still traveling through life. And life is what we came here to experience.

Life is something we all have. It is something we struggle with or celebrate daily. And whatever we can do to lighten the daily load, for ourselves and others, that would be a contribution.

In that light, I have started a new blog. It is http://traveling-thru-life.com

Caz’s travel blog inspired me, and she encouraged bloggers to use Siteground, Wordpress.org,

So I decided to join the big kids. The result was, I ended up on the playground yard bleeding.

Apparently, Google loves Wordpress as it has many functions. However, for a cyber inept person like me, it is a challenge, and not intuitive—as though they expect their players to know something about computer programming. Ha.

http://traveling-thru-life.com is a simple site, but alive. (That is if I’m not working on it.)  See, I’m playing with websites instead of packing, for we are moving to our new house on Thursday of this week.

Please check it out my new site. Blow the audience numbers out of the water—that is hit the ceiling of my allotted hits, and I will sign up for the next level.

We all search for meaning, for balance, for grace. We all deal with the mundane of life. Some of us dream of that little beach cottage where we can have the solitude to think, to be alone, to understand why we are here and where we are going.

Writing, some say, is thinking through the fingers, and that is what I am doing here. Thinking and connecting.

Thank you for joining me.

Let’s travel-thru-life together.
Posted by Jo at 1:17 PM No comments:

The Peacock and The Frog

A long time ago I did a visualization to find my totem animal.

In my mind’s eye, I traveled down a path and stopped before bushes that rustled telling me that something was hiding within them. I coaxed, expecting to see some cute little furry animal, “You can come out now."

To my surprise, the animal that strutted out of the bushes was a peacock.

A male peacock in all his finery. 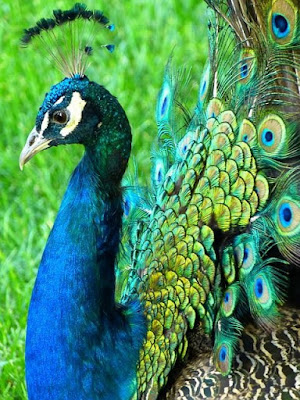 Fast forward: We bought a house in Riverside California. When my little daughter and I visited the empty house, I looked up through a clerestory window, and there on the roof was a peacock.

I figured it was an omen—my first encounter with my peacock.

We lived up a hill from a park, and he was a frequent visitor. From our roof, he could survey the countryside.

A few years later we bought property in Marcola Oregon, and upon visiting the property, what did we see?

Later on, we would see him running with the wild turkeys.

And then last week I visited our new house, and looking out the bedroom window, what did I see on the fence?

I couldn’t believe it. I was yelling for the dog to come see.

In the sleepy little town of Junction City Oregon, in the middle of winter, in a neighborhood, I never in my wildest dreams would think I would see a peacock, but I did.

Is this telling me something or what?

If I roll back the time to shortly after my first encounter with the visionary peacock, I visited the bushes again and asked the peacock, “Why do you stay hidden here in the bushes?”

“Because,” he answered, “Here I am the only peacock.”

It’s time for me to join the other peacocks.  In light of this, I am publishing my Island book on Kindle Select. Just a tad bit more editing and it's good to go. No peacocks in it.  It’s not about the peacock. The peacock is grace, vision, a kick in the pants to get with it. I don't know why he is associated with houses, perhaps because I have houses and writing mixed up with each representing significant potential.

I accept his visitation with gratitude.

We saw no peacocks during the year we spent in Hawaii. That year was a hiding-away place, not a be-seen place. It was a time of contemplation, of re-grouping, of finding oneself.

The peacocks we saw on an earlier trip to Hawaii lived in a fabulous hotel, wandering in and out at will, meandering over expensive carpeting and roosting in the beams of the amazing foyer.  No hiding away for those peacocks—and they had a person to clean up after them.

I wonder what it would take to be the most read book on the month on Kindle. Most read books receive a bonus, and that's the reason I'm asking. I don’t believe it is as strange as seeing three peacocks associated with three new houses.

My book will be called The Frog’s Song. “The frog calls the rain that settles the dust for our journey.”

The Frog’s Song is about the voyage.  It’s about time away to contemplate, to learn that sequestering oneself off on some remote tropical island, living in the jungle off the grid, and down a mile and a half of lava encrusted road gives you time to find yourself.  Sometimes one must go off and regroup, and to learn to forge ahead. Pele called this little family of one husband, one daughter one seven-month –old grandson, two dogs and two cats, and one narrator, to the island, and then, in her wisdom, she kicked us off.

(And the Coqui frogs sang to us, and called the rain.)

Kindle Select has done a tricky thing. They are paying authors for pages read, not for just having someone purchase the book. Authors of long books were complaining—they spent years writing, and then to be in competition with some little 99-page booklet didn’t seem fair. Thus Kindle Select is implementing the pages-read policy.

Gone are the days when a writer can say, “It doesn’t matter if you read my book, just buy it.” 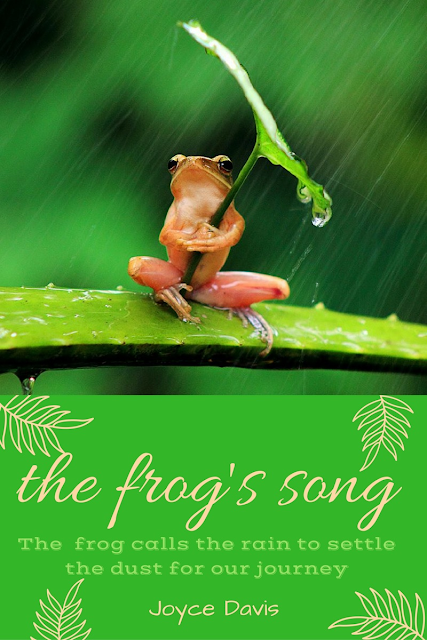