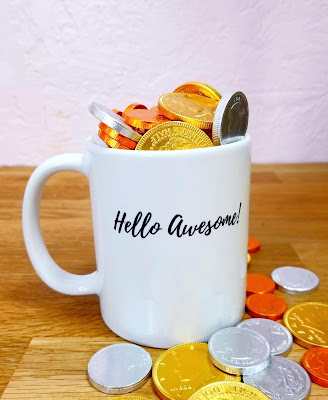 I follow Caz Makepeace’s blog Ytravelblog.com, and they were touring the Oregon Coast.

Hey, that’s my neck of the woods.

One suggestion I want to follow is to jetboat the Rogue River—I’ll wait until summer, though.

Once I whitewater rafted the Rogue, and it was a wet blast. A friend from California talked me into it, but that adventuring soul has moved on to an even more exciting place. I hope she’s traveling; she loved that. With her gone, I must find a new person to jetboat—I bet daughter number one and grandson will do it.

Here I am sitting in the middle of winter dreaming of summertime.  Next month the kids and I are going to Disneyland—Southern California will be sprouting flowers, while our poor little plants are taking a sabbatical.

We completed Christmas, as did you. It appears that they keep coming faster. However, now that we have had the winter solstice, I look forward to longer daylight hours.

Look who showed up for the solstice. 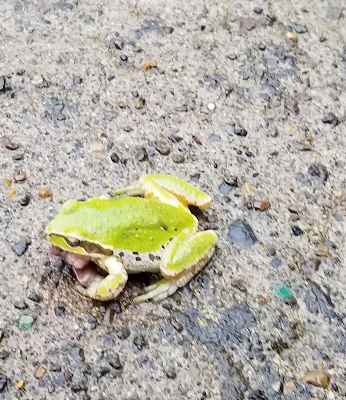 He was only about thumb-sized.

We got a free ham for Christmas. A boxed ham has shown up on our doorstep three years running-- addressed to the previous owner. Twice I’ve sent it back. This year I kept it--guilt-free.

Perhaps the ham was to compensate for the theft of our two propane tanks. (We have a propane stove, and as I was preparing to cook, there was no gas, and I knew my daughter had switched tanks earlier that day.)

Was someone in dire need of propane, or was it drugs they wanted?  I don’t know, except the tanks were worth more than the ham, but the Great Spirit gave it a shot, bless her heart. Such a bare spot, though, where the tanks used to be.

I almost put the ham box filled with used kitty litter in the driveway in hopes that the thief would take that too. Instead, I used it for a Christmas box.

But the image of a thief running down the street carrying two propane tanks tickles me.

The following is what I’ve been up to this week--that was getting another website together.  The site is https//thewisdomseekersblog.com and has some old information you might have heard from me, and some you haven't.

I had to add the word “blog” to get the domain, and I have to watch as the word isn’t keeper, it’s “seeker.” Isn’t that what we are, “Wisdom Seekers?”
The following is an excerpt from The Wisdom Seekers blog.com

This morning when I saw the stick lying on the floor vibrating as though it had been electrified, I knew it was my turn, yet with quivering hand, I picked up the stick.


I wondered if the group would throw me out. I feared ridicule and laughter. You don’t know what you’re talking about, some might say. You’re crazy, says another.
Wait, you will have your turn.
I knew that there was a truth buried deep within me from old times, from ancient cultures, from present teachers, and my own experience. And I know that we must share what we have gained from the privilege of living on this beautiful planet. (If you don't value this planet watch "This Strange Rock," on Netflix and see how our earth daily fights for us.)
After a while, we see each other for who we are—we are The Wisdom Seekers.
While I love motivational speakers and hold dear wise words from people more learned than me, I know that most people do not have an Instagram life. All of our pictures aren't rosy, and all of our experiences aren't grand.
We see so many photoshopped images; it's hard to tell the untouched from the touched. Most of us don't have the bodies, face, skin, or hair of those beautiful people we see presented on media sites. (Don't read fashion magazines, it will just make you feel ugly--unless you are the enlightened soul l think you are and can see behind the makeup,)
When Lucy Hone's spoke on Ted Talk about "Resilient People," she asked her audience questions such as, "Have you ever had your heart broken?" "Have you ever been in an accident, had surgery, broken a bone, know someone who had cancer. watched a loved one die?" Soon the entire audience was standing.
While some people walk on hot coals to prove then can, most everyone has walked through the fire of life.
Therefore, our mission, should we choose to accept it, is to learn some mastery skills.
I do not promise anything on these pages except mastery over life (Haha, I'm kidding.) I'm offering a romp through some experiences, insights, and stories that will shine light in dark places, and glow brilliantly on others.
I suspect because you are here, that you are a Wisdom Seeker.
Take what you will from the Wisdom Seekers. Add your own, and know that I love you,
Joyce
"And what would you do," the Master said unto the multitude, If God spoke directly to your face and said, 'I COMMAND THAT YOU BE HAPPY IN THE WORLD AS LONG AS YOU LIVE,' What would you do then?"
And the multitude was silent, not a voice, not a sound was heard upon the hillsides, across the valleys where they stood.”
–Richard Bach, Illusions
https://thewisdomseekersblog.com

How Does He Do It? 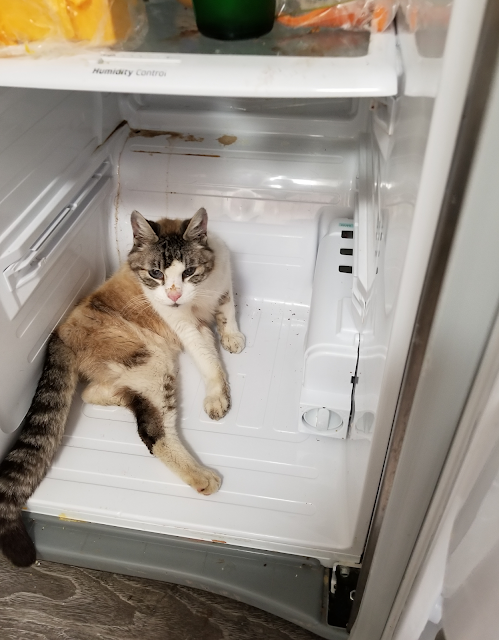 Here's help cleaning the refrigerator, something he couldn't do in Hawaii, as we had no frig.

Zoom-Zoom is so old I’ve forgotten his age—same as I’m doing with me. He’s a little older than I am when you count cat years.  And he’s the only animal left from our trip to the Island talked about in The Frog’s Song.

Baby Dear was seven-months-old when we left for The Island. This coming February on Ground Hog’s Day, he will turn eleven.  We celebrated his first birthday at Black Sands Beach in Hawaii, where the Hornbill turtles came to sun themselves. And there Baby Dear smeared the smooth caviar black snd on his legs.
Peaches, my poodle, found another pup for me, Sweetpea. If Bear found Layfette for Daughter Dear, he chose the opposite of himself. Bear was the most gentle, easy-going Newfoundland, even to the point of putting himself between Baby Dear and a Doberman that rushed us from the bush.
Layfette is a coon-hound, highly excitable, and highly talkative. He’s the town crier (or should I say brayer, as coon-hounds bray instead of bark). He announces, every move--us coming or going, every person on the street, bicyclist or dog within 100 yards of the house, and then he goes into the backyard and checks the periphery.

What’s so stupendous about him is that he sits around purring.

Does he see something on the other side we don’t?

On the Island, he got fat from eating and no exercise. He was afraid to go outside and wouldn’t leave my desk for more than a potty break. Now, he will go for walks with us, wanders around the neighborhood, can be found sleeping in the weirdest places, like the little ditch in the neighbor’s yard—where two women walking down the street, though he was dead—amongst the flowers in the front yard, even atop the wire tunnel, we built between two chicken coups.

He is handling his age with grace.
A box is a great place to sit in or sleep on. This was taken in October after my first-born Grandson’s 14th birthday party. 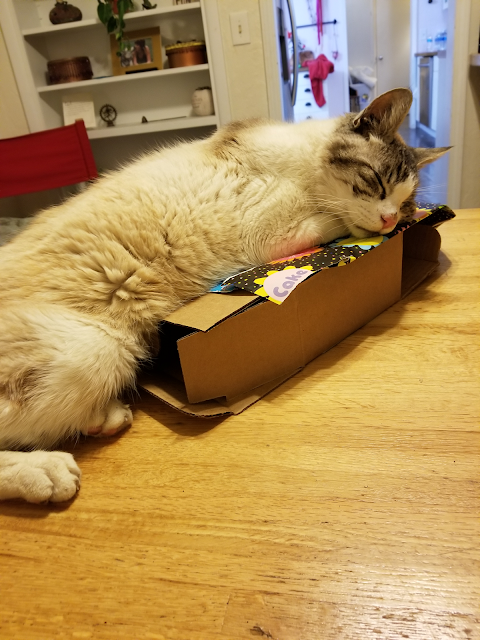 I called our excursion to the Island an adventure. Now I’m finding (a nod to Martha Beck again) that an adventure has the potential of having everything go to hell. If all’s well, it’s a vacation.

You know about Joseph Campbell’s archetype of The Hero’s Journey.
First, the hero hears the call and often refuses to go.

Then something happens to catapult the hero out of their comfort zone and into the journey. (I felt we had to leave a house that was draining us.)
Both daughter and I felt the Island calling with such vigor we had to go. And the fact that we managed to pull it off was a second telling point. I wanted all this in the book, the hero’s journey, the trials, the angst, but perhaps it took ten years to get the gist of it. I’m looking back now, for I know it’s hard to see the forest when you’re in the thick of it. But climb a hill and look back, and the majesty of the forest is spread out in panoramic detail.

We learned we survived, we found what we wanted and what we didn’t want. They say the Island gives you clarity—and it will bend you to your knees until you get it.

We found that you can play hot/cold with life, that you can change your mind. To say, yes, when something calls with the intensity that the Island called us. And coming home, I got a boom—that was the book The Frog’s Song accepted for publication, and to meet my lovely editor/publisher (via email) was a delightful adventure.

The book, however, is selling like hotcakes at a glycose intolerant convention. I know I’m not marketing enough, but then the doing of it was the important thing.

I believe my publisher wanted a sweet little travel story. I wanted a Wayfinder’s journal that would contribute to a reader’s life.

What a Frog Taught me About life would be a more compelling title. However, The Frog’s Song was stuck in my craw, from those far away medicine cards that set me on the trail to believing that the frog’s song calls the rain that settles the dust for our journey. But’s The Frog’s Song’s title may sound too sweet, and some think it’s a children’s book. (Don’t knock children’s books, they are some of the most creative around.)

A woman called across the concourse to me at the Lane County Fair, where I was sitting at the author’s table, “How long have you been writing? She asked.

“Since the day before God was born.”

She laughed and responded, “I was there.”

She didn’t come close to me, but went on her way, afraid I might nab her perhaps, busy maybe. Fun though.

What did the frog teach me?

(I’m the frog croaking out my un-melodious sound.)

The frogs of Hawaii sounded sweet, singing their own name, “Co-qui,” sounding like birds, and their size was no larger than your thumbnail.
They taught me to sing at night. To sing whether anyone is listening. To sing while the world tries to shush you, and pesticides come to kill you. To persevere in the face of adversity, and to know that even if you are a dull little brown frog that you have a place, a voice, and that you matter. While people considered the Coqui’s “noise pollution,” those little frogs did no harm. They helped by cleaning up bugs, and their voice was a love call. No harm there, make more frogs.

Here I spoke of Zoom-Zoom yesterday. This morning he was moving around apparently trying to find a comfortable spot. I stroked his cheek, and about two minutes later I was shocked to see that he had flown away to the Happy Hunting Grounds.

It put a period at the end of our Island adventure.