You never know what you will find on the trail.

That's the fun of hikes. Well, you don't want to run into a bear, or poison oak, but come on, here's a trail right smack dab in the middle of a residential community with probably no bears. If there is, he deserves to be there.

We found the trail on google.

Having driven from Eugene to Hillsboro Oregon in daughter’s electric car we had planned to stop for a charge along the way, so we left early. It only takes about 20 minutes for a high-speed electrical charge, and that gives time for a pit stop anyway. Daughter dear's Kia Soul will go about 90 miles on a charge and costs about $7.50 for a fast charge. At home, with an overnight charge, electricity cost is about a buck and a half.

Electric cars are probably the wave of the future, and I've learned that charge facilities are scattered across the country, and easy to find on a charge station map, or the GPS.

We arrived in Hillsboro early, and instead of going straight to our destination, a family potluck, we decided to take in some of the sights. Orenco Woods Nature Park popped up on google, and there was something there that intrigued us.

Okay, we take off on a trail where the website had warned us to wear hiking shoes--what we didn't. It was a beautiful day, though, and so we traipsed down first a cement trail, then a sawdust one, then light gravel, continuing around bends where we were sure we would find what we were looking for, and then another bend, only to show more trail.

We had a couple of false turn-a-rounds, as time and feet were growing thin and sore respectively.

But we didn't. We came upon a bridge. 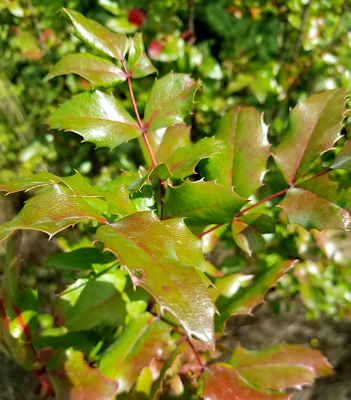 To my surprise, I found that Oregon Grape has medicinal properties.

'The chemicals in Oregon grape might help fight bacterial and fungal infections. Oregon grape may also slow the overproduction of skin cells in diseases such as psoriasis."

I better take another trip to the woods and gather some, my skin could use it.

A couple of ladies hiking the other direction told us that what we were looking for was only about 1/8th mile ahead. Okay. We trudge on.

And there it was--as surprised to see us and we were to see him. 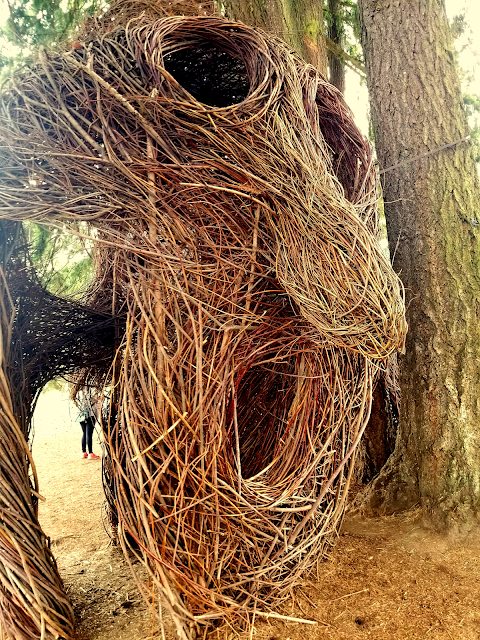 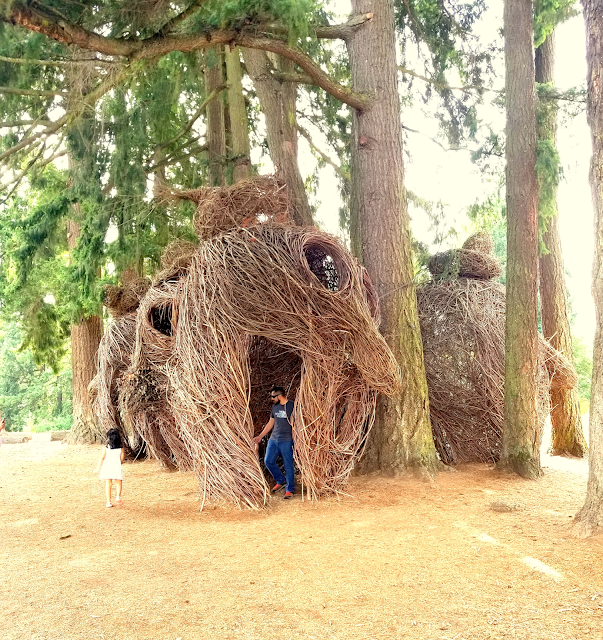 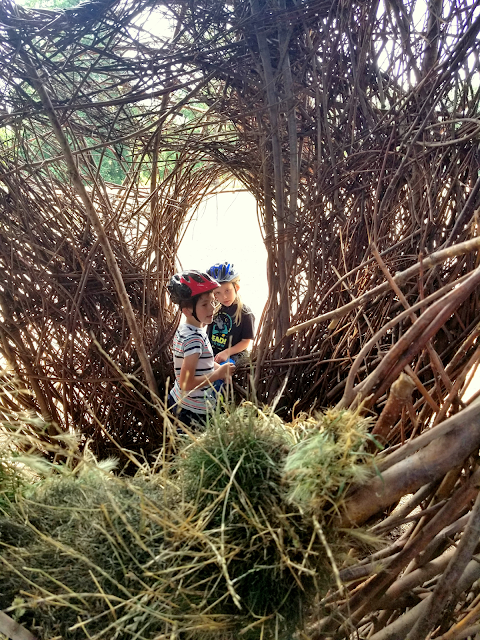 "Head over Heels," these stick sculptures, were the brain children, of Patrick Dougherty, who has over the past 30 years built 200 of such sculptures--different designs--all over the world. They will last about 5 years before disintegrating, and the ladies on the trail told us we were about two years into that time-frame.

They are 18 feet tall, and made of willow and dogwood collected from local parks. One hundred and fifty volunteers helped to build them.

Like I said, you never know what you'll find on the trail.
Posted by Jo at 9:48 AM