June is Bustin’ Out All Over


“I never thought I would live this long,” June says.

Two days ago June celebrated her 95th birthday.
I say “It’s because you appreciate life.”

But does she listen to me?

“I did all the things wrong,” she says. “I drank too much, smoked too much.”

But that was then.  Not now.

June ’s mother died at age 26 leaving June and her brother with a father who couldn’t manage two children, and so he shuffled them off to relatives.

June suspects that her mother died of an insulin shock as June developed diabetes at around that same age and has managed it without insulin ever since. He mother had gone to the movies, came home, lie down and died.

When June ended up with a fanatical Christian Aunt who thought that a girl who “saw things” was demented, June petitioned the court, “Your honor,” she said, “ I can choose where I live can’t I?”

With a nod from the judge, June ended up in a girl’s school.

Once grown, June joined the WACS— The WWII Women's Army Corps—where  she met Howie, the pilot of her dreams.

When he proposed she said, “But I can’t marry you, I won’t live long.”  (Thinking she would follow her in her mother’s footsteps.)

“We have insanity in the family.”

That was it, a life partner. They went to college together; she practiced her art—for she had always wanted to be an artist, and now she was happily married to a man who said, “Your job is to paint, not to clean the house.”

Eight years later his plane went down on a routine maneuver. Another pilot from an accompanying plane testified that he saw Howie slumped over and that he didn’t respond to radio signals. The plane crashed.

When two men in official uniform appeared at June’s door she knew why they were there, and they had to run her down to tell her.

But she got over it.

She studied art on hillsides with famous painters, she traveled, she had many loves, but none stuck until last year after she entered a retirement facility—a place she said she would never go. By a stroke of serendipity she fell in love with a widower named Christian.  For one year she and Christian were blissfully happy. He even said that after the first of the year they were getting “hitched,”

Except, he peacefully passed away the end of December.

Did June have a life without struggles?

But you would be hard-pressed to find a more upbeat person then June.

When I set off for her birthday party, my daughter said, “Have fun with June.”

“I said, “One always has fun with June.”

When I hear Abraham talk about one’s true self, I think of June. She knows who she is. Abraham says that when we feel that disconnect when we have been angry, or out of sorts, when we have been critical, and we feel less-than-honorable, less than a loving individual; we are disconnected from Source.

We came here to be on the leading edge, to create, to dream, to find the juice of life. Shit does happen, but you rally, as did June. She genuinely likes people, and tells herself, “I am friendly,” and people respond in kind.

Think about a baby smiling that pure joy in being alive. That was you once.

When I talk about Food for the Soul (aka Brunch), I mean feeding the spirit within. Find that moment of joy. Be grateful. Look out there at our beautiful world.

You have probably heard the story of two Native American braves that saw two dogs fighting.

“Which dog will win?” asks one.

“The one we feed,” says the other. 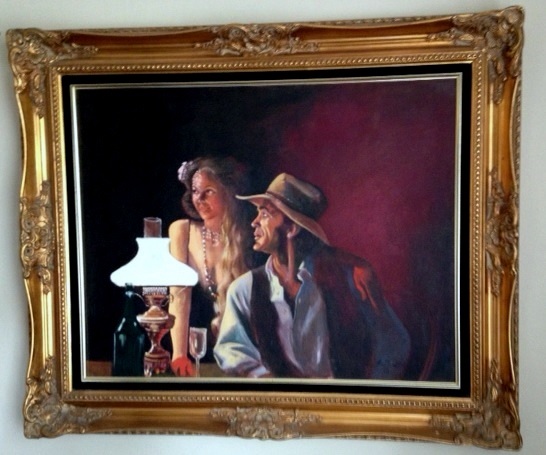 Painting by June Walton
Bad photo by me
Posted by Jo at 9:43 AM