On the way to publish Tuesday's blog,"What Do You Think? I was warned that some domains were coming due, so I began clearing out some old blogs.  I came upon this post. If you've read it before, please forgive me. It was posted on May 2 2013. Jan was my sister. I guess I'll publish "What Do You Think?" next week. Stay tuned.

She was crying when I first saw her. She was three years old. I was twenty.

It was evening. I rushed in the door, fresh from work, anxious to see my new sister, and was met by a sobbing little girl. Here she was fresh off the plane from Korea and had ridden with my parents from the airport in Portland to our little town of The Dalles, Oregon. She was thrust into a new family, into new surroundings, panicked to see a dog, and our little Jan was so tiny we didn't know if she could stand. She kept repeating a Korean word we didn't know that sounded like "Ummaya," which we think meant "Grandma."

Mother was making all efforts to comfort her, and knowing she was tired from her long trip and in need of rest, Mom filled the kitchen sink with water and bubbles and set little Jan in it. Jan reached out in joy and curiosity to the bubbles, and a smile broke out over her face that brightened the room like a crack in the cosmos.

Jan was our girl from then on.

That night Mom took her into her bed and cuddled her until morning. After that, mom became Jan's haven, a place where she felt safe and adored. Jan was a joy to the family, and she and I became fast friends. She would crawl into bed with me in the mornings, wet my bed, and greet me with incredible affection. I loved her, and I loved showing her off. She liked pretty clothes, and I would dress her and brush her beautiful long dark hair and take her into town with me.

When I was at work, Mom said she would wander around the house asking, "Where's Jo?"

Regretfully I waited out the day assisting dental procedures instead of meeting the plane from Korea and experiencing the joy of watching babies being placed into eager parents' hands. Mom said when a parent connected with their child, it was cosmic. Mom took Jan into her arms that day, and that was it; they were connected. Jan was a sister to two brothers and a sister who came later and to me. Mom got the family she longed for, and Jan got the mother she needed and with whom she wants to be buried.

Two months ago, Jan exclaimed about her newborn grandson, "I didn't know I could love that child so much. I love being a grandma."

She had undergone her first round of chemo and felt good, hopeful, and filled with dreams. "I want to get a little house I can play with," she bubbled, "and entertain, and I am getting my music back. Maybe I will perform. I used to do that, and people in town still remember my piano music."

Jan had married and had a beautiful daughter, divorced, and raised her child as a single parent. She was highly efficient; even as a teenager, she could clean up a kitchen before the guests had finished burping. She gave up her music in response to the father, who kept volunteering her for events without asking. And she wanted her expression back, her skill, her ability to make music. She wanted her power, to dream again, to laugh that infectious laugh again.

I miss her terribly.

In my mind's eye, I asked Mom why this happened. Why did Jan die so young? I saw the image of Mom taking frail Jan into her ample loving arms and cuddling her as she did that first day.

For years after Mom's death, Mom's grave had no gravestone. One year we kids went together and bought one. Jan and I had never visited it together. So, on a cold December day, I drove from Eugene, Oregon, to The Dalles, Oregon, to visit the gravestone I had never seen. I had brought flowers, and as it had begun to snow, Jan grabbed a broom as we exited her back door. Carrying flowers and a broom, we walked through the cemetery under a gray sky where snowflakes drifted onto our heads and collected tiny crystal pinwheels on our coats. We placed the flowers beside the gravestone and gently swept aside the filmy white so we could read the words written on her tombstone.

As we stood there talking to Mom, saying what a wonderful mother she was and how lucky we were to have had her, the gray clouds parted in a tremendous arc, revealing the clear sky above. The snow stopped. We stared above in disbelief. "I feel joy," said Jan. "So do I," I said. Then as abruptly as they had parted, the clouds closed, and it began to snow again. 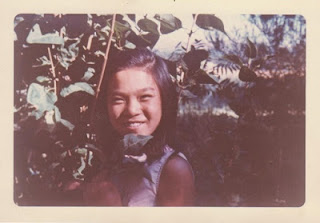 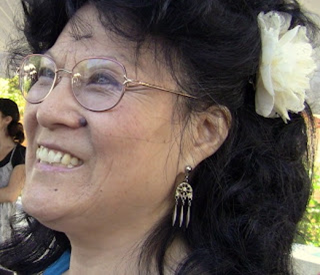