Funny, Sometimes You Read a Story and Exclaim: “What?!” And You End It With an Embarrassed, “Oh.” 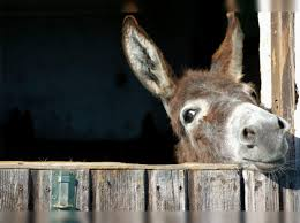 I’ve eaten my words more than once.

When I read about Donkey cheese, I couldn’t believe people would pay $500.00 for a pound of cheese, but after watching the video about the only farm in Europe that makes Donkey cheese, I said to the farmer, “You go, man.”

Donkey cheese is made using the milk of an endangered donkey species - fewer than 1,000 are alive. (I hope they aren’t stealing from their babies. However, since they are milking them three times a day, that will up their milk production, so maybe they can feed both.)

It all started in 1997 when Slobodan Simic’, a former member of Parliament, saw the Balkan donkeys being mistreated. He was so mad he bought all 1,000 of them and created The Zasavica Nature Reserve. The farm has 300 acres now.

Simic’ decided to milk the donkeys and make soap as it is good for the skin. At least Cleopatra thought so, she bathed in it. Simic’ found he had more milk than he needed for soap, so he decided to make cheese.

The donkeys are well cared for, and they wait for three months after the baby is born for it to have its fill of mother’s milk. Simic’ is the only man, plus one other, who knows how to make cheese from Donkey milk. (Somebody in American said they made cheese from Donkey milk, but hey, this is my story, and it’s what the interviewer told regarding Simic’s cheese.) Making donkey milk cheese is a complicated process. It is low in fat, so they add 40% goat’s milk, plus Casen and bacteria to help the milk coagulate, which is necessary for cheese making. Watch the video. it’s fun. (At the bottom of the page.)

He deserves the price.

The trouble is you must buy it from the farm—a ticket to Serbia in the Balkans would really up the price. It isn’t sold outside the farm because it is illegal in Europe to sell unpasteurized products. The catch is, it needs to be unpasteurized to make the cheese.

I'm Eating my own words—again:

So, what am I doing now?

I’ve committed myself to 150 hours of study (Yipes) to be a Real Estate Agent.

Haha. The state told me I needed to begin again after letting my license lapse. (After the first hour of study, I had a headache.)

I do need a refresher course, for laws go through my head and out the other side. They don’t follow Einstein’s proclamation of “Don’t memorize anything you can look up.”) And, they say, “Trust me, somewhere on the test, you will need to know how many feet are in a mile and how many square feet are in an acre. (5, 680, and 43,560). Do you really think a client would ask me that?

“Can you keep your cool when others have lost theirs?”

This question was posed by one school in their intro, “Is Real Estate for You?”

I knew that they had a handle on what it took to be a broker. (The term in Oregon is Broker. It’s Agent in many other states.)

Buying a house is often one of the biggest investments a person will make. It is stressful and often frustrating—That’s when the broker must keep their cool

Why did I change my mind?

My daughter has kept her license active for more than three years. After three years, a Broker can become a Principal Broker and have their own agency.

Thus, I can work for her. We would be a team, and she would be responsible (as the Principal Broker) if I made any mistakes.

See, people would get two for the price of one.

And isn’t it fun to move into a new house? Think of all the clutter you have an excuse to dump.

Back to the donkeys:

Eva Zu Beck, a young woman interviewer, visits The Zasavica Nature Reserve. There you can see the acreage and the friendliness of the donkeys and her trying to milk one:

I think I ought to sell the cheese. You can try to save people money, or you can just go for the top. Hum. I wonder what the postage would be.

Email ThisBlogThis!Share to TwitterShare to FacebookShare to Pinterest
Labels: Animal reserve, becoming a Real Estate Agent, Cheese for $500 a pound, Donkey cheese, eating your words, keeping your cool, Pule cheese, the most expensive cheese in the world, Videos