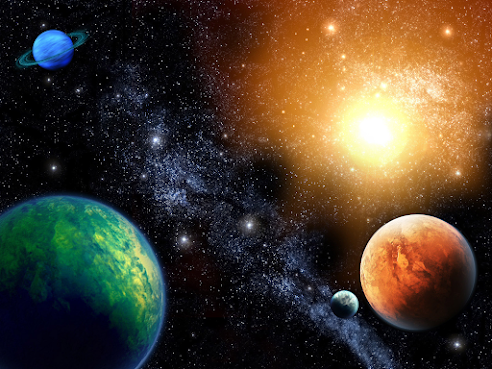 “Experiments show that the focus of our attention changes reality itself and suggest that we live in an interactive universe.”—Gregg Braden

Have You ever been in a room that was buzzing with conversation--when suddenly all talking stopped?

Gregg Braden tells of such an event that was better than any I have ever experienced.

As he sat eating dinner in a hotel's large restaurant where there was a buzz of conversation, suddenly, silence.

He looked to the entrance where a group of people had entered. One of the group stood out, for he was dressed all in white and looked rather like Jesus.

As the group walked past Braden's table, the man in white nodded a greeting, and when Greg looked into his face, he was shocked.

The man had an open wound that extended across his forehead and down his nose. It was unmistakably in the shape of a cross. Gregg looked at the man's hands wrapped in gauze. Red seeped through.

As the man and his entourage walked past Greg, the group members gave Braden a look that said, "Haven't you seen a man bleed before?"

No, he hadn't; not like that. He whispered a word, "Stigmata."

Braden said he had read about stigmata, but he had never seen it.

The bleeding figure was to be a presenter at the hotel the following day, as was Braden, their reason for being in that hotel. However, later Braden learned that the man had other conditions on his body that identified with the crucified Jesus.

Braden's observation: If we don't believe that our beliefs can affect our bodies—look at this. This individual so identified with the passion of Christ that he would develop conditions similar to the crucified Jesus.

I had to buy Greg's book, not when I read about stigmata, for I didn't know that story was in it. I bought it when I read his comment about space.

Scientists now think that space isn't empty. It has something in it.

Braden's suggestion is that something is where our beliefs are made manifest.

That blew me away.

The book is the spontaneous healing of belief (no caps) by Gregg Braden.

In one of my blogs, I mentioned that my purpose was to wonder about things and invite others to wonder. And you know I talk about whatever I am into. I figure it will all sift down to readers as curious as I am about how life works.

Braden suggests that we're bathed in a field of intelligent energy that fills what used to be thought of as empty space. Evidence shows that this field responds to us—it rearranges itself—in the presence of our heart-based feelings and beliefs. And this is the revolution that changes everything.

Now, doesn't that excite you?

Yogis have long told us that we are both the vessel and the substance in it, and we didn't know what they were talking about. That we both observe and create, like the tiny quantum particle that changes as we observe it. Look into quantum physics. It is crazier than anything we can make up.

We have long thought that our DNA was fixed. True, it defines us, our hair color, and our physical apparatus, but now they find that genes click on and click off, affecting our DNA.

Wow. It boggles my mind.

On the one hand, we are told we are frail and powerless beings who live in a world where things just happen to us. On the other hand, spiritual traditions tell us there is a force that lives within every one of us that nothing in the world can touch. That gives us the assurance that difficult times are a part of the journey.

Is it any wonder we're confused? Is it any wonder that the first Star Wars movie with the introduction of The Force so resonated with people? What appeared to be a simple little Space Sci-Fi flick became an outrageous blockbuster.

Now, here's a thought: "If quantum particles are not limited by the "laws" of science—at least as we know it, and we are made of the same particles, then can we do miraculous things as well?"—Braden.

In Egypt's Nag Hammadi library (Early Gnostic Christian writings found sealed in a jar by a farmer in 1945), verse 48 says, "If two (thought and emotion) make peace with each other in this one house, they will say to the mountain, 'Move away, and it will move away."

I figure 100 years isn't enough time to figure out the mysterious workings of life, but we can try.

The 100- year lifespan that we have come to accept is another thing Braden addressed. Why he wondered, is heart disease the leading cause of death in human beings?

The heart is the strongest muscle of our bodies. It begins to beat in an embryo even before the brain has made its entrance. And it doesn't need to replace its cells. It beats continually 100,000 times a day, day in and day out. Should it wear out around the 100-year mark?

If we believe some of the age spans recorded in The Bible, supposedly Noah lived over 900 years, and built the arc when he was strong and healthy at age 600, why the long ages then, and not now?

Braden proposes that the heart doesn't wear out. It "hurts" out. And it seems that around 100 years is its time limit.

Since our subconscious mind records everything that happens to us during our lifetime, every frustration, injury, insult, the heart takes a beating. And you know how it is with human beings, the negative stuff sticks. (What? The ancients didn't have insults and injuries?)

However, if Braden is correct, we're really lovers at heart.

It's isn't time that stops the heart--- It's the hurts.

That is the reason for us to clean up our act.

Well, how should I know?

Let's look into it.