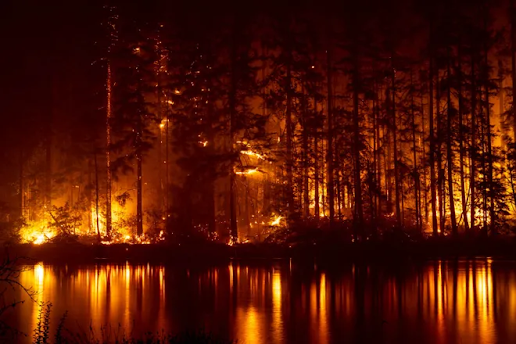 The forest along the McKenzie River was ablaze.

“We literally had minutes to make a decision,” said Jeff Ziller, a Fish Biologist for the South Willamette Watershed District.

He had just received an emergency message that the Leaburg Dam had pulled all three gates. It would be drained to avoid any catastrophic debris pile-up if the dam’s power went out.

“Do we act quickly and release the 1.2 million trapped fish at the hatchery, or do we let them die?”

They decided to save the fish.

So, with an okay from the National Forest Service and the Oregon State Police escorting them, Ziller and 6 others set out to release the trapped fish.

The police lit the way through the smoke with strobe lights. One hundred to 150 salmon were trapped in a fish ladder. Seven hundred adult salmon, plus juveniles, would quickly be stranded in a pond as the Leaburg dam drained.

We were driving along the McKenzie Highway through the burn that happened last September. I checked my phone for the fire’s date and found the story of the fish rescue in Catch Magazine.

I remembered the red skies from our house some 100 miles away and ash afloat in the air, but I didn’t remember the date, and this day was the first time since the fire we had driven the highway.

Sparks from downed electrical lines caused the fire. Extreme winds drove the blaze to an almost immediate engulfment of forest that burned 173,000 acres and destroyed 400 homes. It is officially called The Holiday Farm Fire, Labor day, September 7, 2020. I can’t imagine what it was like for the people living there.

When we first moved to Oregon west of the Cascades, I said I didn’t think I was in Oregon until I saw the McKenzie River. It is beautiful with a raging river and old-growth trees surrounding it.

Last Saturday, however, we drove for 20-30 miles through blackened trees and decimated hillsides. Within these areas were oasis’ of homes intact, surrounded by their green lawns and flowered borders. It was remarkable how some were spared. Magical almost. Strange to see the evidence of a burn weaving, engulfing complete hillsides while leaving other places untouched. The little town of Blue River, slightly off the highway, is completely gone.

The fire stopped before McKenzie Bridge, and just beyond it was our destination.

Since I am videoing forest trails, I wanted to film the one I had walked several times before. It is one of my favorites. And so, as Husband Dear, Sweetpea, and I walked the trail down to the river. I captured it on my phone/camera. It will be posted eventually on YouTube, Jewells Happy Trails as # 3.

I didn’t talk on this walk.

Perhaps I will add commentary when I learn how. I wonder, though, it is so beautiful, and when you come to the roar of the river, it is magical. It would be lovely to give people an experience of a peaceful trail through an old-growth forest, to walk among the trees, and watch the green go by. I’m sure some have never experienced the giant grandfather trees, with the delicate and beautiful ground cover that flourishes beneath them.

I need time to think.

Up from the ashes of Blue River….