Have We Learned from the Pandemic? 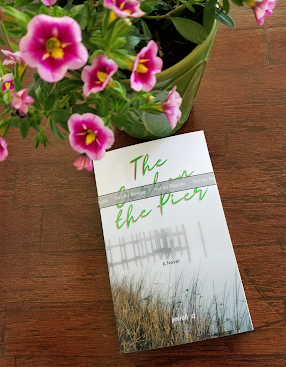 First, look what came yesterday, a proof for my novel, The Girl on the Pier. The stripe is to make sure I don’t sell it. Everything fit, the spine worked, no unnecessary blank pages. I choose a misty/foggy cover for it is a bit of a mystery. First, why would a customer offer two million dollars for the painting The Girl on the Pier? Second, when he saw it he said, “But that’s not the painting, there is another?”
Read a Free sample click here

“There is more love than hate in the world, but hate gets noticed.”

Have We Learned from this Pandemic?

Today I heard someone say she was tired of commuting, tired of her job, just tired, and didn’t want to talk to anyone. She just wanted peace and quiet and to crawl off alone. She said that recently she had spent a lot of time in meditation. “Did I cause this pandemic?” she asked.

The answer was, “Yes. Along with all the others who were tired of the way it was.”

That’s a pretty out-there statement, but what if that is true? We were tired of the way it was. Competition wore us out. Long hours at the job were draining us. Commutes were pushing people to the breaking point.  Kids were getting shot at school. We still had racism and prejudice, and that was after we thought we were smarter than that.  We allowed a wall to begin at our border. We separated kids from their parents at the border. We were discouraged and feeling that we weren’t getting anywhere near to what we wanted. We felt impotent to instigate change when issues such as global warming were staring us in the face.  (Oh yes, global warming doesn’t exist, say some, or it is a natural earth cycle—well, maybe we ought to study it.) We are having more wildfires because of dry conditions. Why did the winter slip past with hardly a cold day? What happened to the snows of yesteryear? When I was a kid, it was so blooming cold in the Cascades that the water flowing over Multnomah Falls froze on its way down. and during this time the Columbia River had chunks of ice the size of Volkswagens.

People like wild-caught salmon, but if the tributaries, the spawning grounds of salmon, dry up, there will be no fish. We take supplements, fish oil to make us healthier. No fish, no fish oil. We’ve come to accept such luxuries without thought of where it comes from. Californians are happy to have the electricity that the Dams on the Columbia River provide. That river needs input from other rivers. Other rivers come from snow-melt.

I wonder if we have learned anything. People are anxious to get back to “Normal” WHEN NORMAL SUCKED.

And now they call what’s coming the “New Normal,” insinuating that it means something not good. That further scares us.

I have tried to get people out of fear and into possibilities--I don’t know if I’ve been successful, for the fear mongers have a louder voice. And who am I anyway? Some little blogger sitting out in the sticks, taking walks in the forest, and proclaiming that we can create the world of our dreams.

Well, how stupid is that?

I tried to place a 30 sec video here, “Pond Ripples.” This site, however, had different ideas. The video is a moment of calm. The water was so clear, and the reflection so perfect we had to throw pebbles into the water to prove it was wet.

You can find it on https://www.youtube.com/JoyceDavis0001/videos
I would love it if you subscribed to my videos.