We need to pull out our dusty Crap Busters, clean them up, oil them, and aim them straight toward the world as we know it right now.

In 1942 Albert Einstein gave an exam to his senior class. The following day a student came up to him and said, "Professor Einstein, you gave the same exam last year, why would you do that?"

"Yes, it was the same exam," said Einstein, "but the answers have changed."

If I had been sequestered on our property and walked outside to the abundant display of new leaves, flowers, glorious sunny days, with an occasional rainy one that makes green the countryside, I would have thought the world was sweet and delightful.

I still think so, but there is a lot of noise right now, and masks, and distancing tape on store floors. Have you been out? Are you listening to the news when I warned you to not to?

Yesterday evening I asked the clerk at Bi-Mart if she thought the social distancing would continue after the virus scare is over.

OMG, I thought. That is not the way for social beings to live… or rats.

Martha Beck (my current favorite author—you know one of those that you must read everything they've written.) in her book, The Martha Beck Collection, Essays for Creating Your Right Life, Martha described a "Rat Park" ingeniously built by psychologist Bruce Alexander and his colleges.

Alexander divided rats into two groups. For the first, he built a 200 square foot rodent paradise where they found luxurious accommodations for all their pastimes, mingling, mating, raising pups," writing letters for newspaper tabloids" (Martha's.)

The second group was in traditional cages.

Alexander offered both groups a choice of plain water or sugar water laced with morphine.

The rats in Paradise just said no while the caged rats were stoned out of their minds.

What does that say about people, and fearing each other, and staying our distance, and even covering our faces with masks? Some people won't even look in your direction. That isn't normal for social beings, nor healthy. 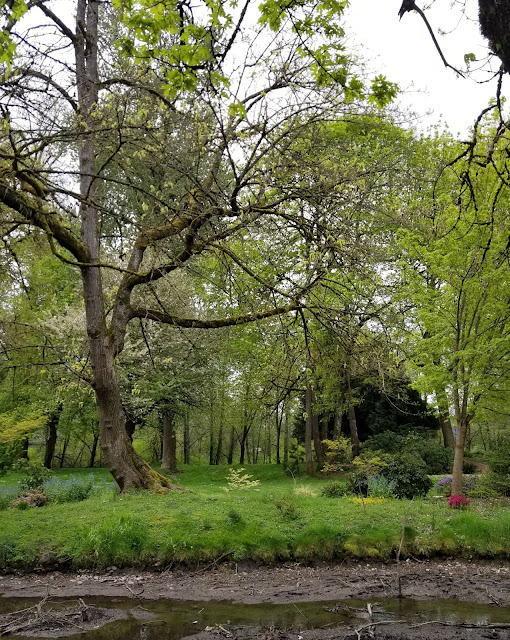 This is Island Park in Springfield, Oregon where my husband and I ate our Sunday breakfast prepared by Shari’s Restaurant, and eaten by us in the car. An old couple holding hands came walking along the path. Both had sunglasses on, although the day was overcast, both wore masks, coats and rubber gloves. She took the driver's seat in the car next to ours, he climbed into the passenger seat. I'm glad they got outside for fresh air and a walk but wondered about all the covering there in the open air. Is that necessary?

When this is over, hug, kiss, gather in groups, go out to the movies, the restaurants, socialize.

I know some might say I have my head in the sand, but even with sand in my ears, I still hear the noise. From the very beginning of this lock down, I tried to lighten up. For I know, you know, we all know that FEAR is the worst thing we can get into, and it is the most prevalent, pervasive, and natural.

So, we try to carry on and be happy, but in the back of our minds lurks this little voice, "They might be right."

Rather like life Insurance. We figure we need it, we resent buying it, we ought to have it, for one of us is going to die, but it pisses us off to feel the desperation.

We don't want to see the world as a dangerous place or to see it so rosy as to deny the truth. "To find the medium asks some share of wit." Wrote Cowper, "And therefore, 'tis a mark fools never hit."

This morning I read Caz Makepeace's blog about walking in a jungle-like environment that seemed like a barren forest a few weeks ago, and she said, "You know, if Mother Nature gets the rest she deserves from this human lockdown, I'm happy to make the sacrifice for her."

"I believe for every drop of rain that falls, a flower blooms." wafts through my brain.

From our back yard: 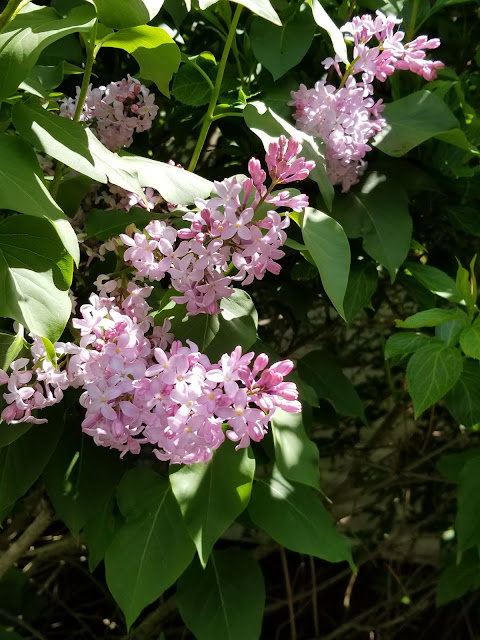 Caz went on to say,  "There are so many theories about this Rona thing, all make me depressed. The only one I want to believe is that Mother Nature is behind it all. Only she could create something so perfect that could shut everything down to protect herself."

I began the day with that old crap buster fully turned on, and I wondered if we could come through this Warriors or Orphans. You have probably heard me speak of archetypes before, for they explain so clearly to me the stages we go through. Although sometimes we get stuck in one. Carole Pearson wrote of the primary six in The Hero Within. They are, The Innocent, The Orphan, The Wanderer, The Warrior, The Altruist, The Innocent (again), and finally the transformational one, The Magician.)

While the Orphan wants someone to fix their problems, and take care of them, the Warrior bursts forth, cleans up the mess, foils the enemy, and slays not a real dragon, but the imaginary one that is our foibles.

When she lays down her sword, she becomes the Magician.

Thoughts of Warriors came rushing into my brain:

"You know for every oil spill, there are hundreds of people out with Dial soap cleaning the sea bird feathers.".

"For everyone who goes astray, some Wayfinder comes to point to the trail."

"When the coastline is covered with litter, there are folks that clean it up and make art of it."

"When people are oppressed, there will be those to guide them through the brambles and out into the light."

"When there is injustice, the just in people rise to the occasion."

"When there is slavery, there are always folks who fight to end it."

We will get through this. We have our crap busters fully charged.

We are the Warriors. 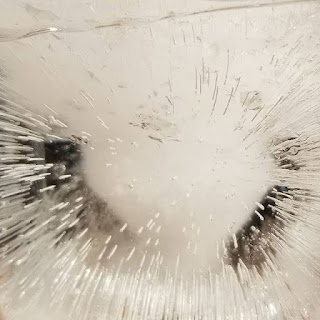 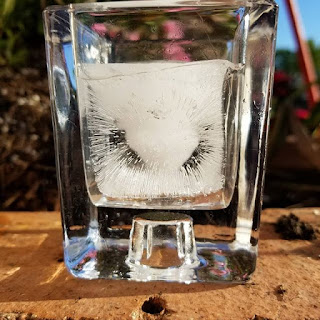 I took these pictures some time ago fascinated that there was a heart in the middle of this candle holder filled with water my grandson put in the freezer. Last week after watching the film, "The Secret of Water," it took on new meaning.
Posted by Jo at 3:29 PM