I Sing the Turkey Electric 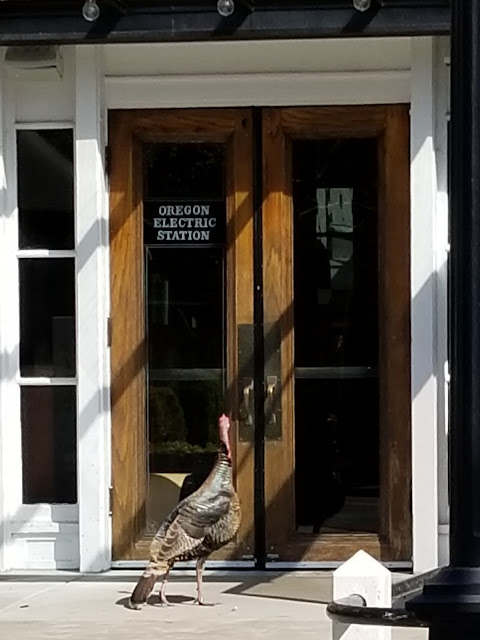 As the people have moved out of Eugene, Oregon, the turkeys have moved in. This one is waiting outside the local restaurant, The Electric Station.

“There is no greater divider than fear.”—Abraham

"Your body is not a temple, it's an amusement park. Enjoy the ride."—Anthony Bourdain

It's a little hard to think of our bodies as an amusement park right now isn't it? Being in quarantine and all, wearing masks, keeping our distance from other people, not visiting with our family, businesses closed, and a "stimulus package," that will not even pay one month's rent.

How are you dealing with it?—scroll to the bottom to get some perspective.

Wait, read the rest of this blog first.

Last night when my husband showed me the drone event during the Winter Olympics, I was, at first, in awe, then I got mad.

I got mad that people are so tech-savvy that they could produce such a spectacle as 1,500 synchronized drones producing three-dimensional dancing orbs in the sky, and we don't know how to stop a teeny tiny virus from wreaking havoc with our lives.

Or if you believe sinister thoughts, that some people are wreaking havoc with our lives.

Don’t buy into fear, and let the world condition drive you into a corner.

You are made for survival.

You are made to live in joy.

Remember why you came here. To make a difference, and to enjoy our lives. I think our lizard brains are taking over, but remember we also have a high mammalian brain. That magnificent brain that sits atop all the others can calm the lizard which would just as soon eat us as look at us. (Like a man who kissed the nose of his pet rattlesnake and it bit him.)

Regarding that scary something we are calling a virus:

I know cellular biology and physiology are complicated, but so is programming a drone display. I think the wrong people are looking into this—we need some of those savvy kids that aren't afraid to think fifth-dimensionally—whatever the heck that is.

My ten-year-old grandson came from the computer room and asked, "What if we lived in a non-Euclidean world?"

I thought for a minute. Euclid? Well, there's Euclidean geometry; that was the extent of my knowledge. "What's a non-Euclidean world?"

"Well, he said, "take a cylinder, (I thought of a giant culvert) that looks small on the outside, but when you go inside, it looks big." (Once someone described a UFO that way.) I think a non-Euclidean world has no parallel lines. I know—this is theoretical, and right now we are dealing with a physical object—a virus, but maybe we should expand our thinking.

Didn't John Kennedy say, "We will send a man to the moon and bring him home safely by the end of the decade?"

And those savvy engineers and mathematicians did it.

We don't want to wait a decade to solve this problem, I just know with Scientific ingenuity people accomplish great things—and if the intent is to destroy our economy, maybe we should mutiny and go back to opening our businesses, and smiling at people, and not from behind a mask.

Remember Tesla? He had some pretty outlandish ideas. Like a machine that emitted a frequency. Proponents suggest that if they match the frequency of a virus, that resonance frequency will destroy it.

A company can make a car that drives itself, that’s outlandish too.

Throw some of those tech-savvy people in with the medical researchers, and maybe they would look into some alternative forms of treatment.

Call me crazy, but look at the stores—isn't that crazy?

Someone can make a car that can drive itself, name it Tesla, and people go cuckoo. But, some of Tesla’s other ideas, like his Rife machine, because we can't understand it, are thrown away as absurd. It doesn’t have funding. It sits on the shelf.

In Tacoma Washington (1940) there was a huge suspension bridge where hundreds of cars traveled over every day. That area tends to be windy, and one day the right frequency of the wind vibrated the bridge until it collapsed. They said it was brought down by resonance frequency. “

An entire bridge for heaven’s sake. Follow the link, there is great footage of a bridge swaying like rubber, and falling into the sound.

People have postulated that if a frequency could be tuned to the frequency of bacteria, cancer cells and viruses it would destroy them.

Worth looking into I’d say.

Over the years I have heard of a Rife machine. (Based on Tesla’s theories.) Conventional wisdom brushes it aside. Yet some think that resonance frequency can kill viruses if they find the right frequency—there’s the rub.

Researchers spent months trying to find frequencies that worked on cancer cells. It was searching for a needle in a haystack. But what about the Enigma machine that cracked the German code in WWII?

Computers can compute at lightning speed maybe there’s some way to connect the two.

Conventional thought poo-poos the idea that light and sound could heal the body.

So, how it is working for us??

Influenza's have killed countless of thousands over the ages, and still every year untold millions get the flu.

A coronavirus got loose and is spreading world-wide and we are trying to halt it or slow it down the best way we know. Our methods seem primitive to me.

The media is having a hay day.

Amazon is having a hay day.

I love how local businesses are coming up with creative ideas.

See, we are survivors.

The local Nutrition store, Evergreen Nutrition,  (keep reading and I’ll pass along an anti-viral herb), placed a table outside each of their two doors, like a counter. You go to the counter order your supplement and they bring it to you.

Restaurants are having take-out.

They aren’t curling up and dying.

There are some shut-in’s my daughter treats who virtually never go outside—to the store occasionally, doctor’s offices once in a while. They would be safe in their cubbies, but what do they do? They watch television all day, and allow the news to program their poor brains until they believe there is a big bad scary world out there.

Oh, Global warming, we can’t be bothered thinking about that.

Election primaries are going on.

An election is coming up.

To take away one’s inner peace is enslavement. Remember Nelson Mandela unjustly imprisoned for 30 years? He came out a peacemaker.

Victor Frankl, imprisoned in a concentration camp came out and wrote “Man’s Search for Meaning.”

Right now, we have an opportunity to rise above, to know that while our physical body is held captive, our minds are not. Solitary confinement does weird things to a social being. Keep some connections. Know that your mind is free.  Know that you are a divine being, and that here is an opportunity to reevaluate our lives and values, and perhaps usher in a new age.

I have a thought lurking in the back of my mind, have you thought of it? There is an old ploy: Create a problem, and we'll give you the solution. Then we're heroes.

One Way to Fight Back

I received the following information from a local nutrition store Evergreen Nutrition.