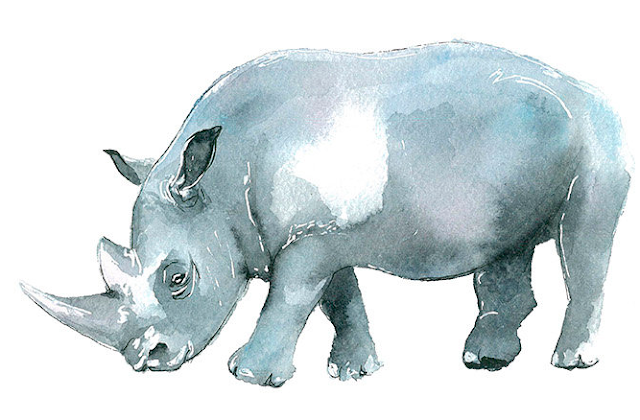 Imagine, Martha Beck thought, a middle-aged woman coming to Africa to get skewed by a rhino.*

As the momma  rhino’s baby—roughly the size of Shaquille O’Neal--was circling behind the people giving the momma—the size of a small tank—good reason to trample the people to get to her baby, Martha, was quivering, yes, but had a big smile on her face.

Here, she had dropped the iron cages of her life and stood natural. It was what she had dreamed of when she was a grubby-fingered four-year-old exploring the back yard.

“How in the hell did I get here”” she asked. And “What in the hell am I going to do about it?’

A rhino whisperer talked the baby into going to its mum, and the two lumbered off, leaving Beck with a talisman.

Find your rhino—that big scarey thing that pops into your life pointing to your destiny.

I’m assuming that iron cages aren’t your style, and that there is something wild in you that seeks freedom.

Okay, but you’re here, so I will continue.

The poet Mary Oliver who had a great affinity for the natural world, wrote, “Tell me, what is it you plan to do with your one wild and precious life?”

Londolozi is a Zulu word meaning “protector of all living things.” It was the name of the animal refuge where Beck and three others stood facing that rhino.

The people who gave Londolozi its name have spent their lives restoring a broken down old cattle ranch. Now it’s an animal preserve flourishing with animal  and plant life, as well as a healthy rhino and her strapping baby.

Martha, realized that nature can heal.

And if nature can heal, so can we.

While on safari Beck told of riding in a land rover with a group of people who were chattering, asking questions of the guide while a driver maneuvered their vehicle. Beside the drive sat a not-unfriendly, but silent native named Richard.

Suddenly Richard spoke to the driver. The driver said, “Hold on folks,” and took off into the bush, over pot holes and through thorn bushers, until final stopping before two baby leopards hidden there by their mother. Questions, “How old are they? “ “Will they be all right?’ Cameras clicking. Yet, nobody asked Richard how he knew that three miles off the beaten path, babies were hidden in the bush.

His knowledge didn’t come from books or classrooms. It came from watching and listening, and observing, and learning from other wise people. Beck describes this style of learning as wordlessness.

I tried a wordless technique yesterday with a pain in my hip—going into the pain, not thinking, listening to my body, not fighting it, and afterward, I felt the pain was 50% better. But then, stupid me, I decided to test it by going for a walk and set it back 150%.

Hey, I’m not claiming to be a medicine woman, I’m just facing my rhino.

*Martha Beck’s book is Finding Your Way in a Wild New World. Reclaim your true nature to create the life you want.

The following is what I’ve been up to the past week. You can see it when, and if WordPress decides to give me my transferred domain. It will come eventually as wherechampagneismandatory.com