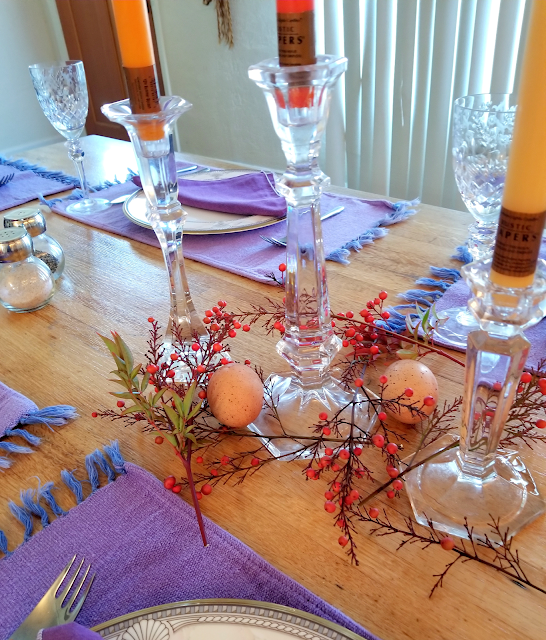 I was thinking of you.

Here’s our bounty, two eggs collected this morning from hens that visited our place and decided to stay. The plant sprigs are from our yard, Nandina domestica, one of the few botanical names I remember from Botany class.

That’s the extent of home-grown around here. I joined the rank and file who harvested at Costco.

You probably won’t have time to read this on Thanksgiving Day. Right now, our turkey’s in the oven, and I’m taking a break. I wanted to tell you I’m thankful for you.
And I have decided on my next year’s Thanksgiving celebration: An Oregon excursion to photograph wild turkeys.

Forget the turkey in the oven.

Who do you suppose brought the first turkey to the first Thanksgiving meal?
Wild turkeys live in our area. We saw them in Hawaii too, and, when we lived in Marcola, a little town outside Eugene, Oregon, we had one old guy who was turning silver.

On occasion in Marcola, we would see a small gaggle of turkeys, along with the neighborhood peacock traveling together, with him adding elegance to the tribe.

That in was a forested area, and it was fun seeing a mamma hen and her chicks scrambling up and embankment, and slipping under a fence while the Momma did a flyover.

Turkeys and peacocks and I go way back, and we have another neighborhood peacock here in Junction City—but I haven't seen him for a few weeks. I trust he’ll be back probably after he grows out new feathers. The last time I saw him, he was tailless.

In Temecula, California,  I fed turkeys for our landlord for a few months before we moved away, and they would send up a choirs of gobbles when they heard my voice. A few got themselves in trouble, though, greeting a coyote by sticking their heads through the fence.

I was surprised to learn that the founding fathers considered the turkey for our national bird, but decided the Bald Eagle was more stately, smarter probably too.

Yesterday we pulled the dining table into the living room, and we will be eating in front of the fireplace. Yesterday the cold weather called for the fireplace, today it’s sunny tee-shirt temperature.

My flag-ship Thanksgiving was in Marcola, I got up at 4 a.m. to prepare the turkey, and I thought of all the women who are filling their tables with turkeys, cranberries and such. I felt like a pioneer.

That day, after the turkey was in the oven, my husband and I drove to the airport to pick up our daughter, who lived in California, and on the way, I saw the lights coming on in the houses, more women in the kitchen, more turkeys and gravy.

I hope your day is or was splendid.

Now, with left-overs, let’s have another Thanksgiving dinner that can’t be beat. 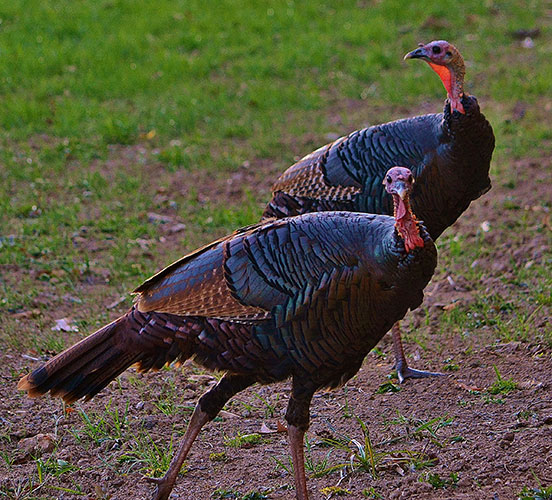