“Yesterday
All my troubles seemed so far away
Now it looks as though they’re here to stay...”
--The Beatles
Have you ever had one of those days—like mine today where you have been rejuvenated from the day before, you're anxious to get home and to work and what happens? Your brain freezes up. And its 88 degrees in this room with the door open.

Yesterday I read that I ought to write an “About Me” page. Maybe that scared me, or it could be that I’m experiencing a let-down from a three-day vacation.

We rented a cabin in the woods—out where the big trees live. 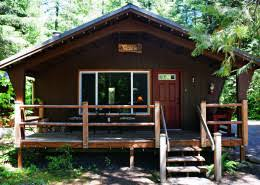 Have you ever sat or walked among the old-growth forest? There is a serenity there like no other. Some say it’s the silica present in the trees that causes such a feeling. Since the grandfather and grandmother Douglas Firs have had years to pull silica into their systems, they offer calmness, like a room full of crystals. Do crystals affect human systems? I don’t know.

It could be that we forest dwellers were experiencing the benefit of all that carbon dioxide the trees were transpiring. Whatever the scientific explanation is, I prefer to think that their serenity is contagious.

Oregon Grape Holly, a low growing plant on the forest floor a ways down from the cabin. 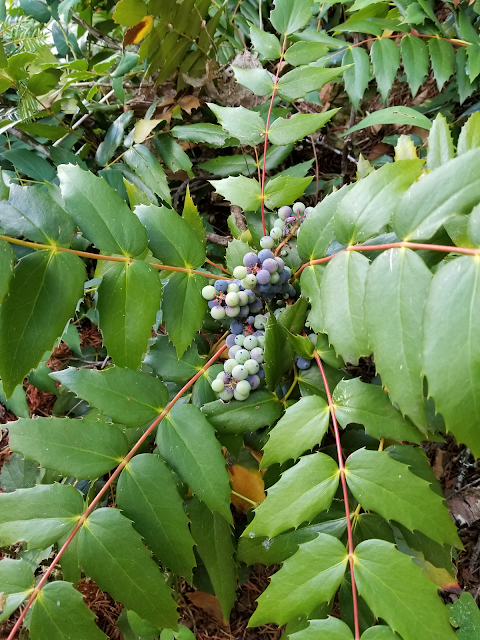 Friends joined us at the cabin, along with daughter and grandson, so all of us soaked up the grandeur that is the forest.

I had been wondering if I could live in the tropics. I can. I did, but I thought as the cool of the evening settled in—you know that time when the earth calms her hectic day and prepares for nightfall. Even the people calm, and the earth is quieter, and dusk comes tip-toeing in like baby kittens following their mother.

When I had a horse, that was my favorite time to take a trail ride. Now it’s still my favorite time, (We had no baby kittens in danger of horse’s feet.)
Today I was moaning the lack of comments from my blog. I’m embarrassed to mention it, but there for a while, I was getting about 100 a day, and then silence. Guess they didn’t like what I was writing. I didn’t expect people to gravitate to a couple of blogs, but when silence dropped, I felt that my playmates had all gone home and taken their toys.  (That was https://travelswithjo.com)

I’m discouraged with my blogging and wondering if my book is selling. I have no numbers, so don’t tell me unless it’s good.

The day ten years ago as I stood in the horse paddock and asked my poignant question, “Where would I be happy?” and the idea of Hawaii popped up, I decided to write of it. Of course, I didn't know, as the case of all adventures, how it would turn out. Two years ago, Regal Publishing Company and delightful Jaynie Royal decided to take a chance on me, and The Frog’s Song was born

The book was released this past June—cast of eight, including two dogs and two cats.

I’m telling myself to follow what Andy Warhol said, “Make art, and let the world decide if they like it or not, in the meantime, make more art.”

So, this is my “About Me” page. Tomorrow it will be a different story.

I wrote this long-hand for I have heard that there is a stronger bond between hand and brain in cursive opposed to typing. And I figured that perhaps I would get to the bottom of my melancholy.

Outside helped, the plants helped, seeing happy chickens helped, for I went outside and pulled some weeds and set the sprinkler, and freed the chickens from their pen for some good picking and scratching and dust bathing before I sat down to write this.

At the end of yesterday, the end of our vacation, hubby dear and I went to the theater to see "Yesterday."

What would you do if you were a struggling musician, and the world took a blip, leaving only you to remember the Beatles music?

And how was your day?

With love from
Joyce