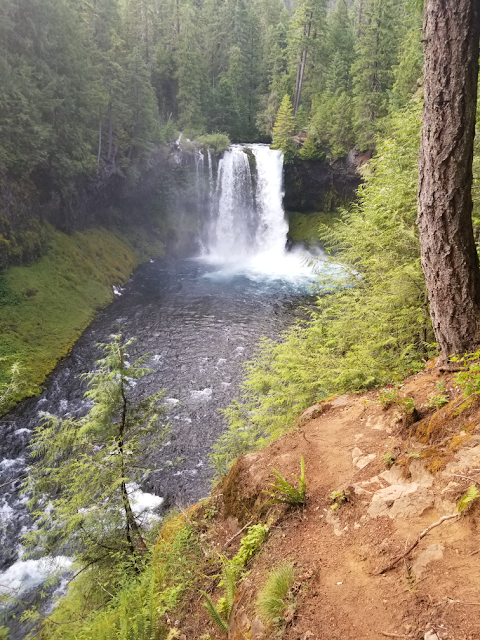 Ironic that we took off for tall timber to escape the fourth of July fireworks only to arrive home to the tune of, “Pop, pop pop.”

We fixed it though, while our little dog, Sweetpea, our motivation for running away, hid under the bed, we turned on the movie Jurassic Part III and the screaming, roaring and chomping drowned out the snap, crackle and pop that was happening  outside.

We had intended to be out past fireworks time, but by 10 o’clock we were ready to be home. We had spent the day out the McKenzie River area, visiting waterfalls, rowing a boat on Clear Lake, and having a picnic with daughter number one and her family by the lake.

Sweetpea has developed a fear of loud noises, so husband dear and I decided to escape the 4th of July and go to the forest.

Did you know that fireworks are verboten in the National Forests of Oregon?  However,  the one cabin I could find that I wanted, was only available on the 3rd . so we took it.

What fun. Sweetpea provided the motivation. And daughter dear had given us a remedy for Sweetpea that seemed to make her better.

I have mentioned that both husband and I grew up in Oregon, but on the dry side of the Cascade Mountains. When we first visited Oregon west of the Cascades, (And we settled here)  I thought I hadn’t seen Oregon until I saw the McKenzie River.

Years ago we visited McKenzie bridge where The Log Cabin Inn had a long history of being a stagecoach stop, and where at that time it was a restaurant where they served wonderful food, and delicious Oregon berry cobblers.

Alas during our time away from Oregon the Log Cabin Inn burned to the ground. And what was once rustic cabins alongside it, are now replaced with exquisite houses, called cabins, that are for rent, at a goodly price, and will sleep 12 . Not what we wanted.

However,  across the street, from what used to be the Log Cabin Inn, is a small convenience.grocery store, and within that store is The Obsidian Grill. You wouldn’t believe how good their food is.  “Fresh ingredients,” they say. It makes a difference, attention to detail. Salad fresh, crisp, and the blacked chicken sandwich, on an artisan bun, bacon, peppers, red cabbage coleslaw, I don’t know what all. Mine was perfect.

Husband dear had pulled pork, that he loved.  Behind the grill existed a large area, partly covered, partly open, mulched with bark, and littered with picnic tables. There you could while away the hours, or eat and run. A movie screen was set up, but the movies hadn’t begun yet. But what a great idea.

That was our destination this fourth of July, and our cabin within blocks of it. 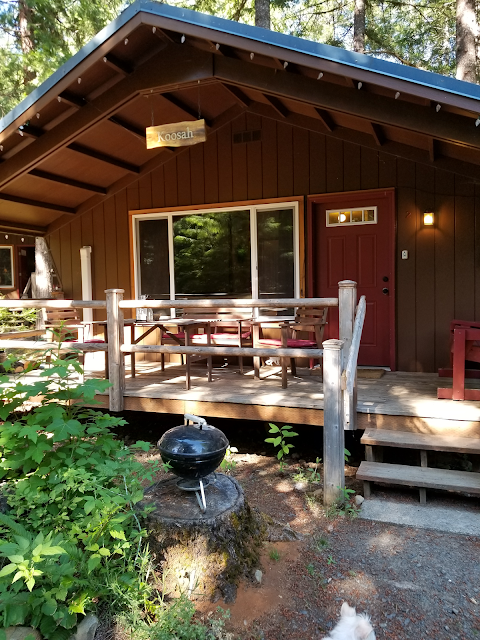 Our cabin in the woods
where we shared champagne with friendly neighbors from Bend. 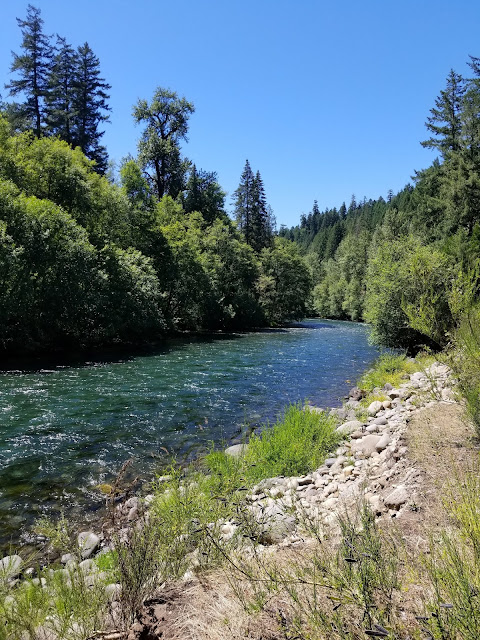 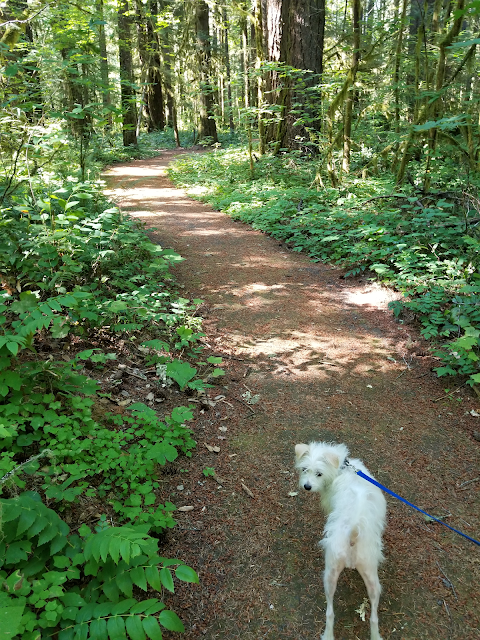 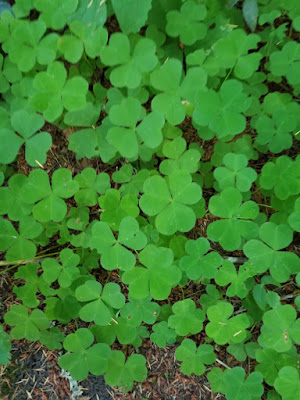 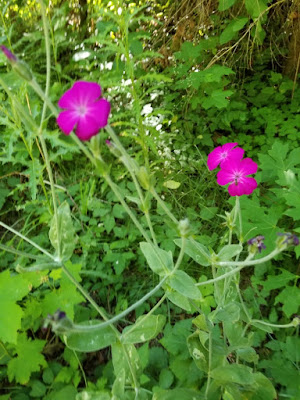 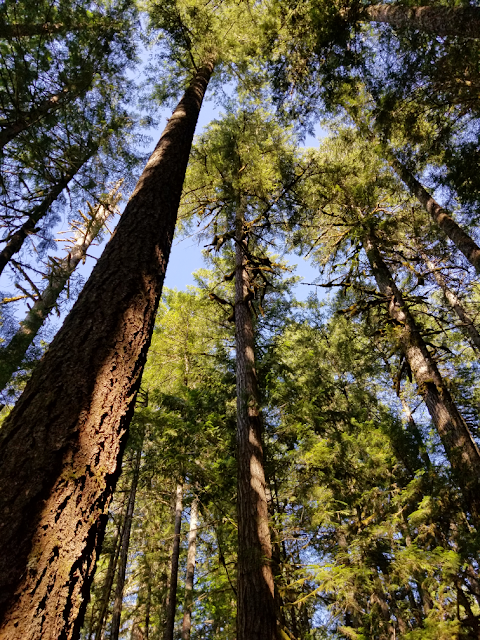 If you travel on up the McKenzie, you will find roaring, turbulent waterfalls, and farther on you will come to Clear Lake. Three thousand years ago the lake was formed by a volcanic eruption that damned up the river and created the lake. The water drains from the lake forming the McKenzie. The headwaters of the McKenzie collects above the lake from snow melt from the Three Sisters Mountains.

The McKenzie is the only tributary to the Willamette River that doesn’t have an Indian name. Phooey. It has a trapper/explorer’s name.

No motor boats are allowed on the lake, but they rent rowboats, and Daughter number one, grandson, Sweetpea and I took advantage of their offer. We took turns rowing and wove our way  out onto the beautiful lake. Along the shores we could see little white butts in the air as Canadian geese struggled to feed on the underwater plant life while their floatation devices struggled to keep them afloat. 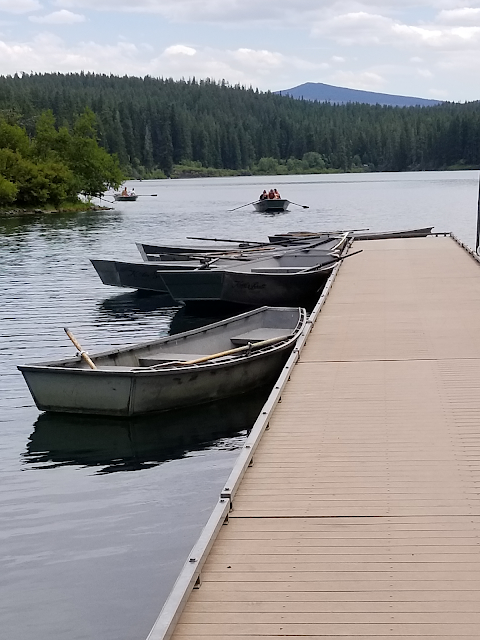 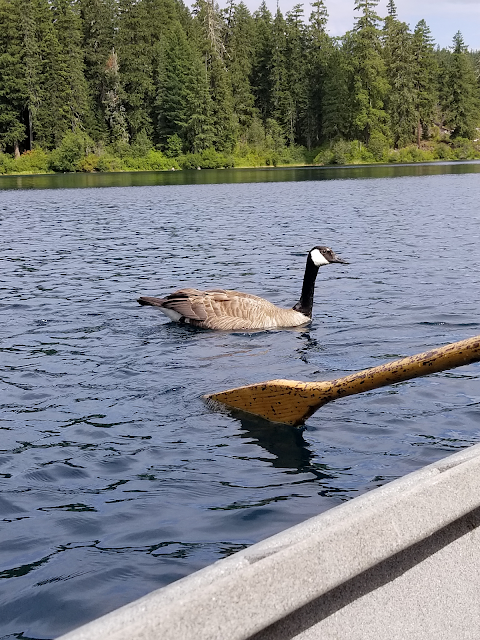 Look who decided to join us. 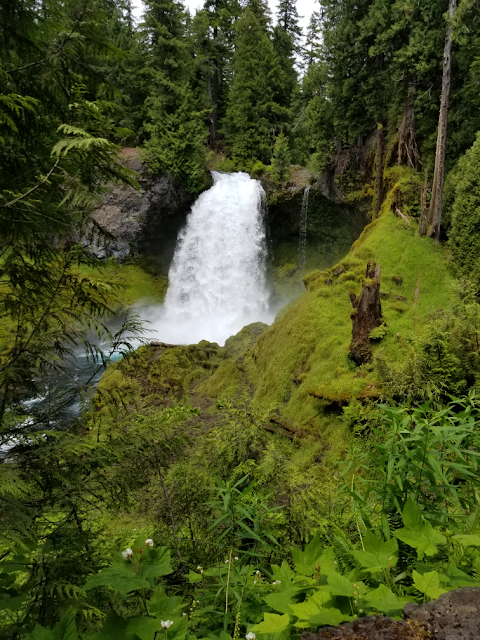 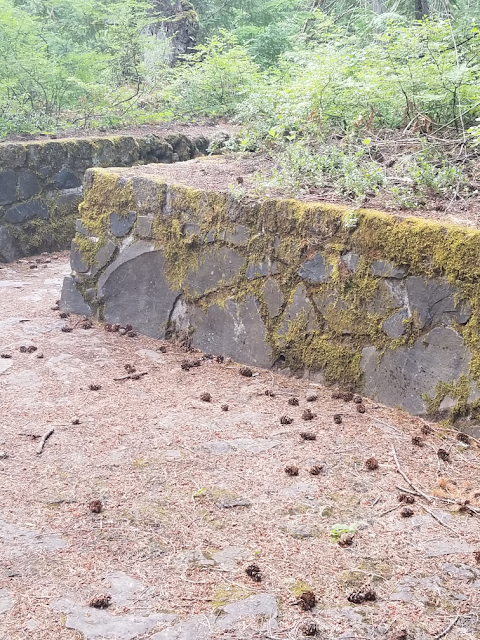 And finally, on the way home, a photo of a wall that formed the entrance to Sahalie Falls built by the CCC--The Civilian Conservation Corps 1933-1942. Look at the precision of the rock work. Franklin D. Roosevelt, long interested in conservation, created the CCC to relieve families who had difficulty finding work during the great depression. One of Roosevelt's most successful New Deals, this one gave men food, shelter, clothing and a wage of $30 per month, $25 of which they had to send home to their families.  (In 1970 this wage was equivalent to $570.)

Visit Timberline Lodge, sometimes, and there you will find exquisite carvings decorating the banisters created by the CCC.

It ’s estimated that some 57,000 illiterate men learned to read and write in CCC camps.
Posted by Joyce at 2:07 PM