Talk about flying horses. Oh, or wishing on them. 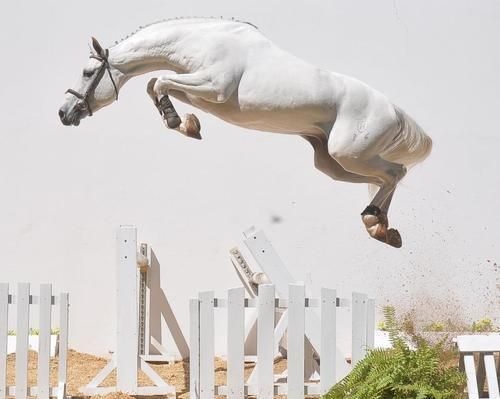 This is Snowman.  “The Cinderella Horse”

Snowman was trucked to go to the slaughterhouse when he caught the eye of  Harry De Leyer, a horse trainer who arrived late at a horse auction. The unsold horses were loaded to go away when the gentle eye of the big white horse captivated DeLeyer. The horse was of mixed breeds, formerly a farm horse, but there was something special  in Snowman that De Leyer recognized. On a whim he asked that the horse taken from the truck,  and he purchased the horse for $80.00.

At home, his little girl said, “Oh, he looks like a snowman.”And Snowman stuck.

Known for his gentle disposition, he happily held five kids. 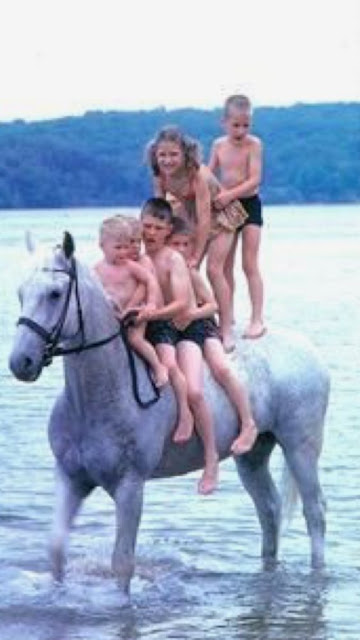 De Leyer used Snowman as a training horse for children until he recognized his talent after he sold Snowman to a neighbor.  Snowman repeatedly jumped 5-foot fences to get back home. As luck would have it, the neighbor was happy to give the horse back to De Leyer who began training Snowman for jumping.

This horse became a jumping phenomenon, winning jumping’s highest honors in 1958-1959. He was the first horse to win at Madison’  Square Garden’s Open jumping Championship two years in a row.

I read that Snowman appeared on the Johnny Carson Show, and Johnny climbed aboard.  Where was I? Darn,  I missed  it. I guess I was too young to stay up late to watch Johnny Carson in those days.

If we want inspiration, take one from Snowman.

Who knows what lurks in the heart and soul of a human or animal. Who knows who will go on to greatness.

And about wishing on white horses, you've heard my story, about Rita telling me to make a wish.

Rita was as crazy about horses as I was. What fun. I added wishing on white horses to my wishing repertoire.

And as you know when at twelve years old I got Boots, a horse of my own. All those years of wishing and having them come true, made a believer out of me.

So here, calling this blog Wishing on White Horses, I intend that we return to our childlike sense of wonder, and magic, and dreaming, and an innocent way of looking at the world--as though it conspires to do you good.

Which I believe it does. We just stand in its way sometimes. Here we're hoping to learn not to do that.

Once we believed in magic.

Let’s do it again.

We all want something. That's life, the constant reaching out, the desires, the lure of the chase, the desire to be better.

And don’t tell me you’ve got it all together, that your life is perfect, for I won’t believe you. Unless, of course, you are already on the other side.

The  juice of life lies in the dream, and success can lie on the other side of frustration, discouragement, and despair. Life isn't perfect all the time, but the outcome can be.