“The purpose of art is washing the dust of daily life off our souls.” –Pablo Picasso

Our souls are washed, our hair is filled with sawdust. 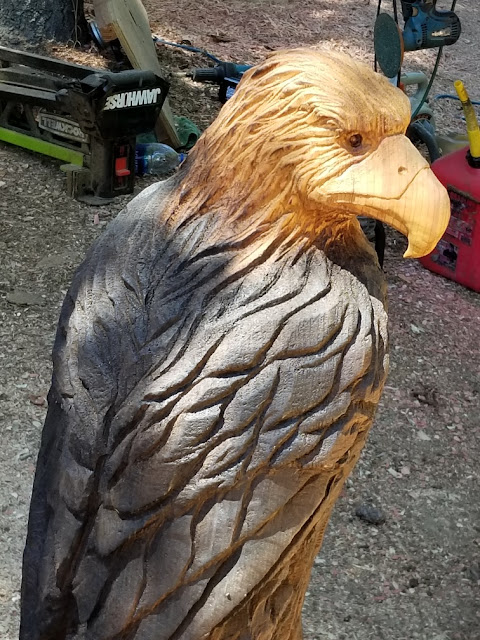 A chainsaw artist took a break and left his bear holding the saw. 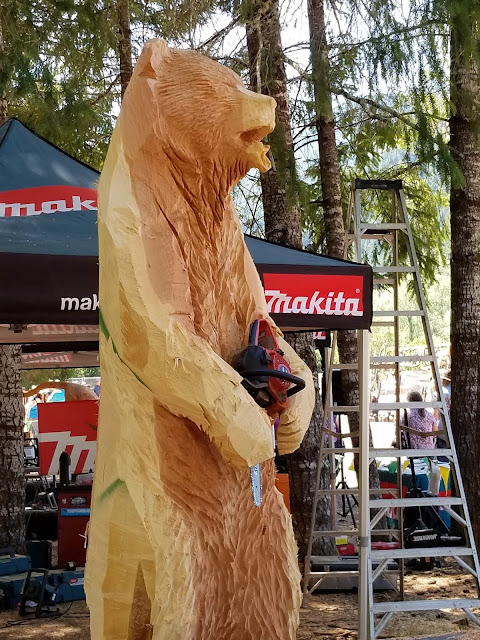 Husband and I took our little dog, Sweetpea to the McKenzie Chainsaw Festival in Blue River Oregon, although we were concerned about the noise. 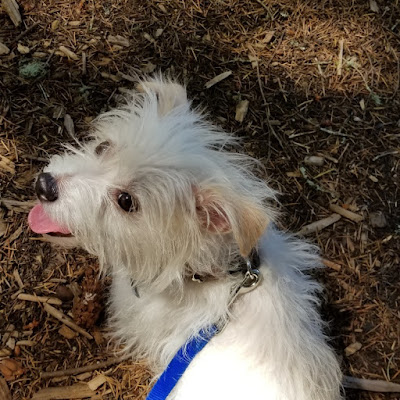 Recently Sweetpea developed a fear of loud sounds. She gets excited about going in the car, though, so we often take her wherever we are going. That little curling up on the floor when we say she has to stay home, melts my resolve to leave her.

I figure she doesn’t know what she is getting into, but then, she knows that bacon might appear somewhere on the trip. (It did on this trip.)

The Obsidian Grill at McKenzie bridge, 20 miles on up the highway from Blue River makes a super-duper chicken sandwich--blackened chicken, no scrimping on the bacon, no scrimping on the tomato slices or the lettuce all green and curly. They add cheese that is cheese, a pepper, and serve all this on a toasted artisan bun that has a slight crunch, which gives it character, but doesn’t tear the skin off the roof of your mouth. (See there was a piece of bacon for Sweetpea. It’s her consciousness.)

Until Sweetpea ’s recent sensitivity I was oblivious to the crashing, banging of trucks with their air-brakes, their loading sounds, their off-loading sounds, and the roaring of them passing.   Well, of course, there are fireworks, and gun shots. The dog has sensitized me.

Desensitizing a horse is called, “bomb proofing,” I think earmuffs might be a good idea for a dog.

Daughter number one gave us a homeopathic for Sweetpea, and it seems to help a bunch. The homeopathic is, Aconitum Napellus 30x

After a dose, she handled the chainsaw noise like a trooper. Tractors were a different story.

In between exiting the car, (that was a delight for Sweetpea) and entering it again, (a greater delight—“Whew, I survived!”) we were struck by the ingenuity of human beings.

The carver made this bear in a log within a two hour specified time. The “Quick carves” (two hours) were then auctioned off. I don’t know who bought the bear in a log, my favorite, or what they paid for it—but to carve this in two hours?! Wow. 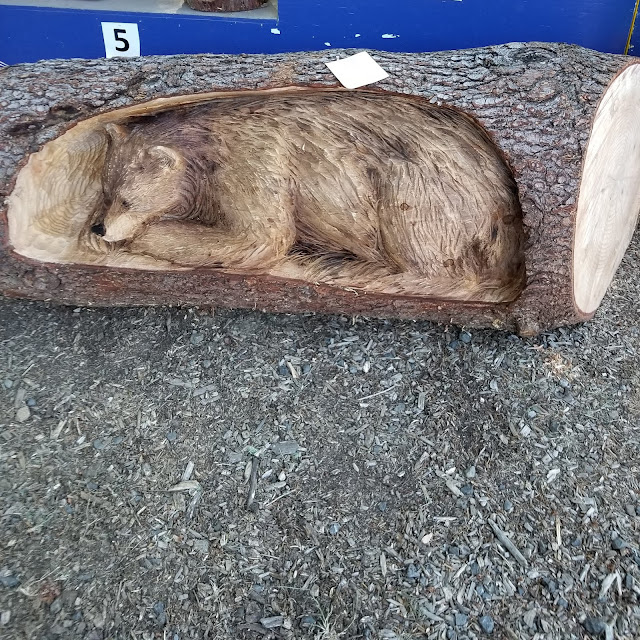 In between Quick carves, the artists worked on their larger pieces. 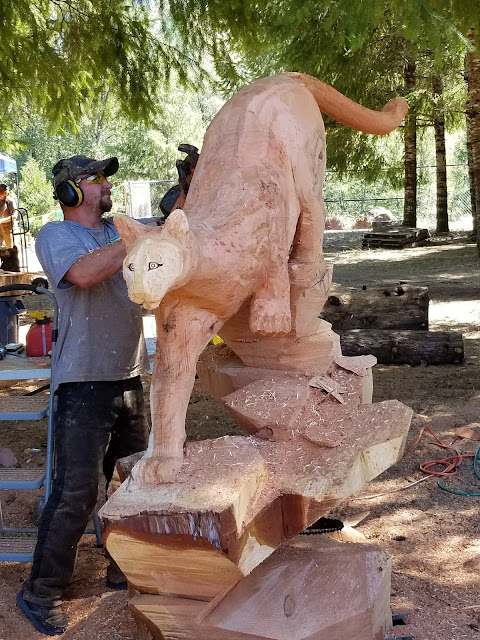 Buffalo by a lady carver. 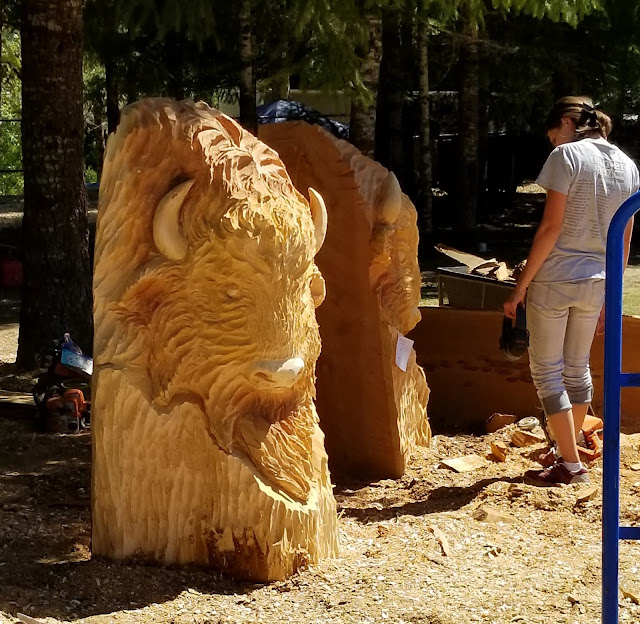 Find meaningful work is one of the attributes that leads to a happy life. And in speaking to one of the carvers, he says he makes a living with his carvings. Often they are commissioned, so it's fun for him to to carve whatever suits his fancy.

While meaningful work is high on the happiness scale, there is one higher, and I was shocked to hear this--it is WHERE WE  LIVE.

Yes, we must take care of  food, education, work satisfaction, committed relationships, and friends which whom you can have meaningful conversations, but stacking the deck is where we live.

You knew I couldn't end this blog without going into something resembling a life lesson didn't you?

Dan Buettner,  author of “Blue Zones,” a researcher of places where people live the longest and are the happiest, says that regarding the happiness spectrum, about 50% relies on genetics with  50% being controllable.

However,  stacking the deck is WHERE WE LIVE.

The peoples of Singapore are happy, but for the American independent that probably wouldn't work. They are secure, success is laid out, they work hard, they keep your head down. It's what is expected.

Costa Rica is "Puta Viva" Pure life, the cities are designed for face to face contact with other people, not just traffic.

Denmark, interesting that a cold climate is a happy one, for people are usually drawn to warmth, tropics, sunshine, water and mountains.  However in Denmark health care is no issue, students get paid to go to the University,  and status is not celebrated, in fact it is frowned upon. The Danes go on vacations, and 80% like their jobs.

Canada is a happy place--hum, another cool climate. Daughter and I loved Canada. Imagine a place where they have signs for buckling up that say, "Be protected, not projected." Unlike the US's "Buckle up, it's the law." And in cities they have "Traffic calming zones," where a driver can pull over to the side of the road. They seem to be friendly, happy people.

Orchestrate your own happiness.

To a wonderful life,
Joyce