You Know Better Than That

“Books are old fashioned,” my eight-year-old grandson told me this morning.

That hurt my heart.

I think of #Ray Bradbury’s book #Fahrenheit 451 where books were burned and how the people each memorized one book to keep it alive.

When Nelson Mandela was in prison, the prisoners had to do hard labor, and that was to break up sandstone rocks. Sunlight on sandstone creates quite a glare, and it is hard on the eyes. Mandela asked the guard if they could have sunglasses to shield their eyes.

Later on, when they had nothing to do in their cell, Mandela asked the guard if they could have books to read.

“You aren’t here to have sunglasses and books,” he said. The answer was, “No.”

So the prisoners devised a plan. They would have a one on one, each sharing what they knew with the other, and thus when they were, at last, released from prison,  each was smarter than when they entered it.

We are all living books filled with experiences, insights, and garnered wisdom. If we shared it, just think where we would be.  I guess that’s what the internet is, but I still want books.

We have this extraordinary quality of desiring to create beauty,  love and learning around us, but with our two-million-year-old brains—evolutionarily speaking—we are, instead, on the watch for danger. There are fears all around us, internal and external. We hang back, afraid to go for our dreams, afraid to go into uncharted territory, afraid to speak up, and afraid of our own shadows. We often think, we aren’t good enough, loved enough, or smart enough.

You know better than that.

If you agree, laugh out loud.  If not, keep quiet.
High five,
Joyce

P.S. The Peacock is back:
There must be one feather that is in focus. I was in a hurry to catch him, I had to show you that my totem animal is real. After two months of a no show, he appeared yesterday. He drove Layfette (that’s one dog) crazy. 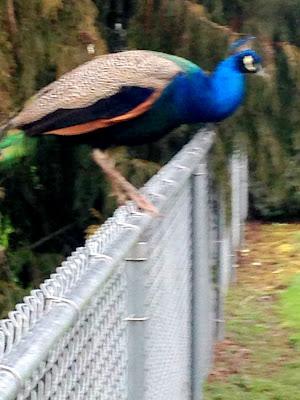