Didn’t we take down the Christmas tree only last week?

This morning I stopped at a Dutch Brothers for a Latte—at a Kiosk I had never stopped at before. A darling girl stuck her head out the window, gave my dog a treat, and we chatted. She said when she saw the Dutch Love picture *she had tears streaming down her cheeks. She told me that corporate office had received a letter from a person who planned to kill themselves that day--after they stopped for coffee. The suicidal person didn’t mention his plans to the server but came away feeling that he had value.  He decided he wanted to live, and wrote to the company telling them about it.

Don’t you just love it?

* I Posted this picture a couple of blogs ago, but I didn't read the text. VANCOUVER, Wash. (KOIN) — A woman snapped a picture of a coffee order while in line at a Vancouver Dutch Bros., but it wasn’t your normal order.
According to Barbara Danner, who posted the picture on the Dutch Bros Coffee Facebook page, the woman in the car in front of her had lost her 37-year-old husband the night before. When the employees noticed she was emotional and struggling, they stopped to pray with her.
Peirce Dunn and Evan Freeman are two of the employees in the viral post. Freeman tells KOIN 6 News the woman is a regular customer and she was visibly upset. At first, the woman didn’t want to talk about her loss, but Dunn and Freeman say they could see she was suffering and they just wanted to give her love and to make her feel that love. They say they just wanted to correct the problem and make her feel happy.
The post has more than 341,000 reactions on Facebook and has been shared more than 100,000 times.

For those who have read my previous blog, I am in love with Dutch Brothers--the coffee people. I love their policy, their friendliness, and their attitude. "We can teach anyone to make coffee, but we can't teach anyone to be nice." Now I find that they are life-changing. My  seat companion at the Tony Robbins live event said the company sent 30 of their employees to the event--all paid expenses.

And now, dear ones, get ready for more of Tony Robbins, Unleash the Power Within --my experience in San Jose. This is the last post on the subject.

Another seat companion asked if I would write about the nutrition talk, I said I would. so dear friend, here it is:

I’m not trying to encourage anyone to change their diet or their attitude regarding it. Just the facts as I heard them.

As I sit here, I am holding a Kleenex under my nose for my sinuses are working overtime to rid my body of whatever irritants got in there. And here I am faced with those wonder men who popped in and out of the event, and said they haven’t had a cold in 35 years.

Whatever bug is bothering me, is going through the family. First, daughter got it, then me, and today little grandson got sick. So far husband dear has escaped. He takes a supplement called “Cellular Forte,” and it seems to save him.

I better add that to my repertory.

Okay, on to the event. First things first--First BREATHE. (You know if you keep breathing you won't die.)

I had never heard of Wim Hof, known as The Ice Man, until  he bounded onstage and led us in a breathing exercise. 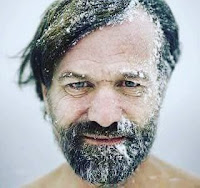 At 57, this Norwegian bundle of energy who looked like a mountain man said that when his wife died and he had four kids to raise, he went to the wilderness to grieve. He said he went to nature, to the cold, to get a warm heart. 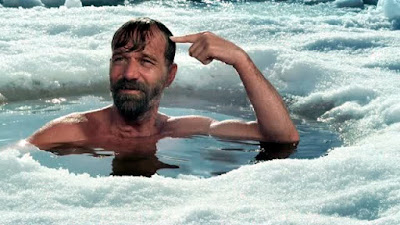 Hof set 26 world records for feats accomplished in extreme cold, Including climbing Mt Everest to 22,000-foot altitude in his shorts, and with no additional oxygen.

Watching the video of him swimming through ice-laden Alaskan waters will blow your mind. https://www.youtube.com/watch?v=XUQwFZ_xFdM

Hof said it’s the mind and the connected breathing that’s the Golden Key to unlock your inner power.  When the adrenaline is up bacteria cannot survive.

He led us in a breathing exercise—super oxygenating ourselves, then we held our breaths for a minute. Breathe again, hold for two minutes.

“Awk, heave, gasp.”
When asked if we ought to breathe through our mouth or nose, he said, “I don’t care which hole you breathe through, just breathe.”

His ice bath record is 1 hour and 44 minutes. When he climbed out, his skin temperature was normal.

I don't think he is a daredevil or a superman. I do think he is a person who has learned how to control his metabolism, through meditation and breathing, It shows the power of the mind.

Breath work segwayed into the power of water.

In Dr. Ferrydoon Batmanghelidj’s book, Your Body’s Many Cries for Water,  Dr. Batmanghelidj explained that as a political prisoner, placed in solitary confinement, he reasoned that without physical exercise food would become toxic in his body, so he didn’t eat. He drank water only and found that relieved his stomach pangs.

Later in the cell block with 250-300 prisoners, a fellow inmate was brought to him with severe abdominal pain. Having no medicine, he treated him with water. And although the man had peptic ulcer disease, the water relieved him. Dr. B prescribed two glasses of water every three hours for the next four months, and it seemed to be curing him.

Dr. B. treated 3,000 similar cases and being a scientist, documented them carefully.  Later the University of Pennsylvania hired him to further his research.

How much water should we drink?

And now, my dear seat companion, I will attempt to explain some of the nutrition information.

First of all, there is power in Living water and Live foods. Our plates ought to contain 75% water rich food, The other 25% can be protein, carbohydrates, fiber.

4   4) Fats
Tony emphasized that he gets his tremendous energy because he runs of fats not sugar as do most of the rest of us. 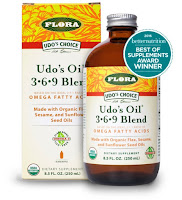 Its originator was in the arena and he emphasized that it is made under the most stringent of conditions and is very pure.

Yesterday,  I ordered some.

We know about pH, the acid/alkalinity scale, and how for optimal health we ought to lean toward the alkaline side. (pH stands for “Potential of Hydrogen.” 7 is neutral, the middle of the scale.)

Our blood needs to be slightly alkaline.

Whereas urine, saliva, and the digestive tract should be slightly acidic. We tend to have an alkaline reserve which is stored until it’s needed to neutralize excess acid in the body. If the body becomes too acidic or depletes its alkaline reserves, the cells begin to weaken and break down.

Overweight and underweight problems tend to be an acid problem.

Cancer cells do not do well in an alkaline environment.

I’m leaning toward the acid right now. That happens with a cold. (Have you ever smelled your baby’s breath when they are coming down with a fever? You know they are getting sick.) Right now I’m going to the kitchen for some water laced with apple cider vinegar and a blob of honey. This isn’t from Tony, it’s from me. Yes, vinegar is acid, but it works the opposite in the body. And with a cold, it tends to restore homostasis (balance), which is out of whack.

First a glug of water.

Oh, yes, and put lemon in your water.

Some alkalinity producing foods:
almonds
carrots
avocados
dates
lemons
cucumber
broccoli
(Have you ever drank wheat grass extract? Wow, talk about green. Wheatgrass  is packed with good things, guess I ought to try it again.  It contains all 8 of the essential amino acids, vitamins, minerals, enzymes, and it stimulates peristalsis and supports thyroid functioning.)

And it will curl your toes.

Meat and lobster are acid producing—eat with a salad.

Love this: The philosophy of “no pain, no gain,” is a fallacy!

Your goal should be to exercise for a longer period of time but in a totally enjoyable way.

And walk at a rate where you can talk.

This in the maximum heart rate:

I found that all the exercise I was getting at the event helped my overall energy level. I talked of all the walking I did, didn't like some of the predicaments I got myself in, but it worked wonders on my body. Our dancing, jumping up and down, standing up at regular intervals, swinging our hips, took away the back pain I had experienced at home.

I was drinking protein shakes for breakfast and at night, and eating a nut blend trail mix throughout the day. I did eat a hot dog for lunch because that was available, and I like hot dogs. Oh yes, and drinking lots of water.

On the way home I was a bit early at the San Jose Airport and I had a salmon salad. It was excellent. The greens were fresh and the salmon perfect--a surprise for airport food.

I think wine and coffee are essential to a happy life, however, they then to dehydrate, so I will drink more water.

Tony said he hadn’t eaten a piece of chocolate for years. On the first date with his wife-to-be, she ordered a chocolate ice cream Sunday.

He exclaimed: “What are you doing!”

His response, “I like that girl.” And, he said, “I even have a chocolate once in awhile and a bit of ice cream.”

I guess all that water, vinegar, and breathing throughout this day helped for at the end of itI felt good enough to make cream puffs. Good comfort food, good fats, not much sugar. Not the best picture, but I can't take another for we ate the subject. 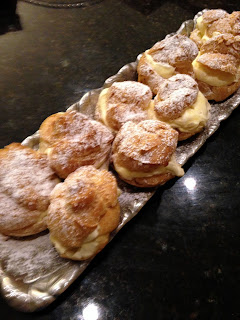 I'd offer you a cream puff if I could, but you're there, I'm here. (Where are you?)  I could give you the recipe, though.  Probably cream puff recipes have remained the same over the years but this one comes from a 50 year-old-plus recipe book. And the Bavarian cream is simple to make, delicious and essential. Filling with just whipped cream doesn’t do it. 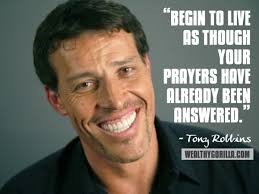