Remember This If You Are Ever Chased by a Bull

I didn't wish you a Merry Christmas, but I can wish you a Happy New Year. And I want each and every one of you to know how special you are to me. Without you, I would be like the tree falling in the forest. "Does it make a sound if no one is there to hear it?"

Thank you for honoring me by visiting my blog.

I spent Christmas night lost in the bathroom--the second time in my life--I did it once as a kid, and always remembered it. When I couldn't find the light switch I thought, Oh no, not again.

I did escape eventually, but then that rasping cough and raw chest muscles kept me awake. You have heard the expression, “She can’t fight herself out of a wet paper bag?” Well, I couldn’t.

Aren’t you glad we tend to forget how miserable the flu can be? Usually, I have symptoms, but don’t feel sick. This time I had both. And that bug is wrecking havoc with this family.

For me, just plugging in the Christmas tree lights was too much work. My girls fixed Christmas dinner. That was before my second daughter got sick.

Our family dragged themselves to the Escrow office yesterday--to sign house papers—hope we didn’t give that nice lady what we have, but the previous owners wanted it done before the end of the year.

And then, today, I couldn’t believe it, the Loan officer assistant asked that I send the bank statement to make sure we had the funds to cover yesterday’s Cashier check. I though a Cashier’s check was like cash, if we didn’t have the amount in the bank to cover it, they wouldn’t give it to us. (Copying and scanning, back to haunt me.)

But then what do I know, my brain is fried.

I had been going up and down with cold symptoms, but the 23rd the day of the office Christmas Party, I thought I was recovering, got gussied up and had a ball. The bug crashed in on me the following day.

There I was at a scientific instrumentation gathering--expecting intellectual talk, right? As luck would have it, I sat next to a live wire wearing a Rodeo buckle the size of a dinner plate.

He was a former #bull rider.

I had to laugh, perhaps I was the one in the room who would most appreciative a Bull Rider. I asked him if he had ever seen #Bull Poker, “Oh yes,” he said, “but I would never do it.”

If you don’t know about Bull Poker, it’s when four guys who have drowned their brains in Budweiser plunk $50.00 down on a card table in an arena with a loose bull. They sit in four chairs.

Last man sitting gets the pot.

He said every time he sees a bull, he’s ready to ride. You come off wired, he said. After the man is off their back, and the flank rope is off, the bulls are so tame you can pet them.

Between rides, he was a Rodeo Clown. I know about those fellows. They are the ones who rush in to save the rider on the ground from being gored. Those men are agile—can leap over barrels the size of Volkswagens. He said it wasn’t so hard to out-step a bull, for they are big, heavy and slow to turn.

Remember that if you are ever chased by a bull.

I just got a notice from Google, “Did I want a card with a photo of a past Christmas?” I squinted at the thumbprint copy. "It was my 2009 #Christmas turtles!"

How in the heck did they get that? I keep wheretigersbelchandmonkeyshowl.blogspot.com for archive but have not visited it in ages. 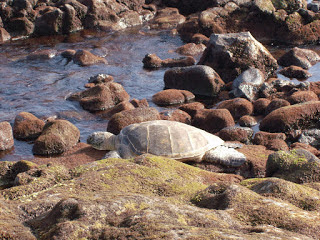 Our first trip to Black Sands Beach with its caviar sand and sea turtles. Legend says that the turtles come to scoop troughs in the sand to collect freshwater for the people to drink, and they come to protect the children. 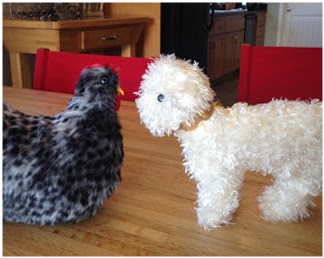 Chicken by Daughter number one. Sweetpea dog by Grandson number one, 11.

Made entirely by hand.

You are my inspiration. 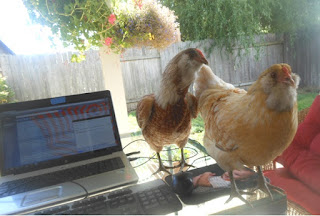 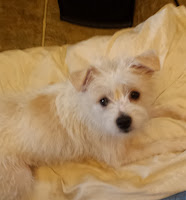