At 8 o’clock on February 9th, 1964, 73 million people gathered in front their TV sets to watch The Ed Sullivan Show.

That was the night the Beatles appeared on television in the U.S.

Imagine all the people
Sharing all the world...
You may say I'm a dreamer
But I'm not the only one
I hope someday you'll join us
And the world will live as one
-- John Lennon

I watched the movie presently in the theater,  Eight Days a Week, a documentary by Robert Redford last week and watched and listened to the Beatles again. The mania that ran rampant was incredible, and then because of an off-handed remark by John Lennon, much of the world turned against them.  His remark was not meant to be insulting, nor was it in any way against religion. He was only stating facts. They were more popular than Jesus.

From Imagine to Help where John Lennon poured out his soul with his discouragement:

Help me if you can, I'm feeling down
And I do appreciate you being round
Help me, get my feet back on the ground
Won't you please, please help me.
—John Lennon

When I heard them sing Help, however, the sound was so upbeat, that it didn’t seem like a cry for help until I looked up the lyrics.

I understand how a person doing their art, loving what they do, wanting to be successful, practicing their hearts out, and then not really understanding the hoopla if they do become successful, especially WILDLY successful as the Beatles were.  Crazed mobs could have crushed them. That’s plain stupid.

They considered not calling themselves The Beatles anymore, and that’s when Sergeant Pepper’s Lonely Hearts Club Band was created.

This was an alter-ego group that would allow the group to experiment musically.
One astounding thing about the Beatles is that they really liked each other, and that releasing any work required the complete agreement of all four.

An effort where the players get along and are happy in their work shows in that work.

I’ll get By with a Little Help From my Friends.
“What would you think if I sang out of tune,
Would you stand up and walk out on me?”
--John Lennon and Paul McCartney 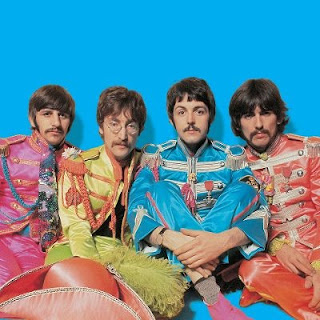