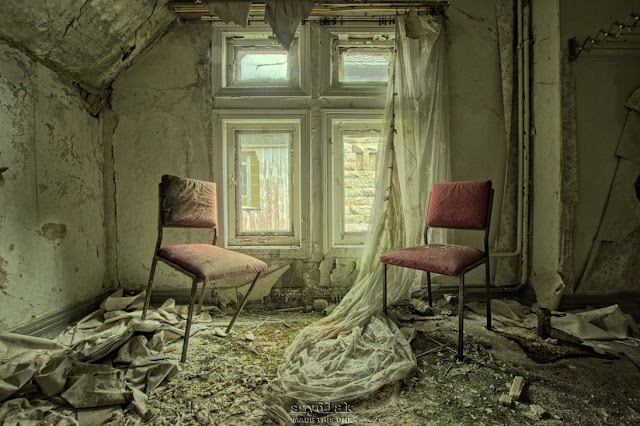 Worse. Not this house.

It was in shambles. A wreak. Holes were punched in the drywall, exposing the studs, bare cement floor in the living room.  The kitchen was a disaster. All flooring needed to be replaced.

A dumpster, yep that’s what that house needs.

And a complete renovation.

I would be embarrassed to let anyone see that house right now.

But, if you are thinking about a fixer-upper, the before pictures ought to look bad, real bad. For then the renovations will look good, real good.

Someone had broken the lock to a door leading to a crawl space under the house. That “crawl space” was ceiling high and we could see that all pillars, beams, and flooring looked great. Overhead access to plumbing and wiring would help in any changes. needed or wanted. The house is situated on slanted ground. The portion sitting on level ground was built on a cement pad, the portion over the hill was built over wood floor joists.

A few months ago my daughter found that house in foreclosure, and it was coming up for auction. She saw it as a flip house. I saw it as a money pit. Any possibility for profit seemed unlikely.

The house did not sell at auction, so now it is back in the Bank’s hands.

I spent the last two weeks processing the idea of that house. I didn’t like it. It was dark, dreary and depressing. My husband liked it which didn’t help matters.

But, motivated by the Reality show Texas Fixer-Upper with Chip and Joanna Gains I began to see that sows ears can be made into silk purses.

However, since the house was foreclosed, it gives the owner or heirs, a right of redemption. That means they can buy it back. And that first 6 months was reset at the auction. It goes until March.

It is unlikely that they would pay the fees associated, and satisfy the loan to boot. Since they let it foreclose and go through an auction,  it would appear they want out. Also, we believe the owner died, and if he has any heirs I can't find them.  However, to begin renovations, one wants a clear title.

There was a key under the house that opened the front door. We went in happy to see what it was all about, measured rooms, and drew a floor plan. We didn’t touch anything and locked it again. Was that illegal?

Whoops.  I didn’t think about that.

But hey, we have a Real Estate agent daughter, although she was not present at the break-in , so she’s home free.

P.S. Is this déjà vu for some readers?

About 16 years ago I was writing about building a log house.

I am so jealous of homes in Waco Texas where you can buy a house situated on green lawns the size of a football field, complete with gorgeous mature trees for $50,000, put $150,00 into renovations and have a dream home that in Oregon would cost $500,000.