Joe Kumaskie is The Metal Cowboy, and author of the following article:

Loading groceries into the van at the Eastside Fred Meyer's before I visit my ailing Mom, I notice a young man in a sports car having trouble getting it started. He's parked engine to engine and one slot over. I see jumper cables on the hood. We make eye contact and his face is part shame, part determination and part defiance. I set down a bag and mimic jumper cables and point at my car. He gets out smiling. I pop my hood.

"You hook em up, while I finish loading," I say. He's wearing a shirt that reads, McAwesome. The M is the McDonald's logo. I can see now that the car is a rehab with a Macco paint job and a baby seat in the back. His accent puts him somewhere in Northern Africa... Ethiopia maybe?

"Good thing you have cables because I lent my sister mine."

He nods. "The battery, it's bad but I don't have the funds right now to replace it so I carry the cables instead."

We jump it, starts right up. Looking at his battery with the corrosion jogs my memory. I dig around in my glove box, and hand McAwesome a Les Schwab envelope.

"That's a transferable certificate for a new battery. I got it when we had another car but we only have the van now. It's good at any Les Schwab forever so..."

He keeps bowing and smiling and shaking his head. "Many blessings on you... so many many."

I wave him off. The whole thing took like two minutes and the coupon would have gotten lost, forgotten or tossed. He drives away.

I go to roll the cart back and notice a guy in the truck beside me shaking his head.

"You might have just helped a terrorist, know that?!"

I stop the cart. It's my turn to shake my head.

"I told him to fuck off back to Africa," he says.

Puzzle pieces drop into place. McAwesome had asked for help, gotten grief, explains the cables on the hood and looking at me with shame and defiance.

I had so many things I wanted to say to this guy, about the nature of fear, the world we manifest with our choices, how kindness is not weakness and why we'll never kill our way to peace. I open my door, turn back.

I think about the joy on my son's face the night before at the Weird Al concert, my Mom's brave smile staring down the cancer.

"What... what it means is... if you're broken down in this parking lot I'll give you a jump too." 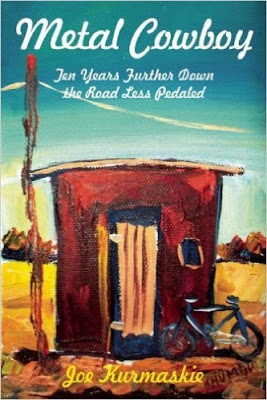 This article came to me from a reader after I wrote about the little girl at my grandson’s school who wears a scarf to cover her hair and clothing to cover her body.

Besides this article, Kumanski wrote The Metal Cowboy, a complication of stories about his bike touring trips and the people he meets.  His only stipulation regarding my posting his article was that I link to his his website, about IRON OVERLOAD.(Iron It Out).

Never heard of it. Until now.

It is a genetic disease called hemochromatosis, where the body stores too much iron. The symptoms are often fatigue and depression. Hemochromatosis can eventually damage the liver, cause cancer, heart attacks, or Alzheimer’s. It can be deadly.

IT IS TREATABLE! When caught early.

Joe  is paying it forward, trying to include a test for it in routine blood screening.  His site is:


Chapter Six of One Year on The Island now on oneyearontheisland.com

Do you like my new cover picture, or prefer the last one?'