This Will Make You Smile, or Cry or Both

I picked up a little book at Goodwill the other day, a Newbery Metal winner. I should read this, I thought, find out what sort of writing wins the Newbery medal.

Well I was blown away. I read the entire book, Walk Two Moons by Sharon Creech (Harper Collins 1994) Sunday afternoon, and I smiled and cried.

Walk Two Moons  is narrated by a thirteen-year-old-girl--suspense, sad, funny, poignant, healing, all the things that ought to be in a book.

Sal (Salamanca) is locked in a car with her Gram and Gramps for ten days while they drive from Kentucky to Lewiston, Idaho. “We’ll see the whole ding-dong country,” said Gramps. But that’s not why they are taking the trip—it’s a path to a missing mother.

I had to read the chapter “The Marriage Bed,” told by Gramps to my husband.

Fascinating that the old folks didn’t like to use the words “Native Americans” but thought “Indian” sounded nobler, American Indian.

Injun to Indian to Native American, Grams concluded, “I wish they would make up their mind.”

I wondered if my high school sports teams, “The Dalles High Indians,” were now called The Dalles high Native Americans. We even had a bonafied Celilo Indian high school kid as a mascot. He had a charming personality, was popular, and we never felt we were exploiting him.  During many games or festivities he would dress up in native regalia and parade around the football field. We meant no disrespect. He made us proud.

About Walk Two Moons—fascinating that there tucked away in a stack of books at Goodwill Industries, I find gold.

Goodwill Industries--is that the fate of books? 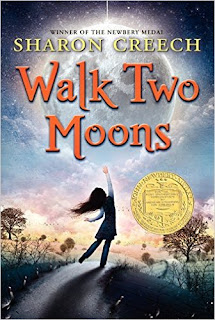 P.S. The Second Chapter of One Year on the Island is now available