I Shall Go To The Mountain


“I don’t think we could manifest a train here,” I said to my daughter as we sat by a window at Chevy’s Mexican Restaurant in Del Mar California. “There is no train track here.”

Not a minute later a huge flat-bed truck stopped on the road and waited for the traffic light to change. A tan canvas tarp covered the back of the truck and clearly, printed in huge letters, and waiting for us to read it, was the word, “TRANE.”

We almost blew iced tea out our noses.

This morning I had a similar experience. I showed up for a seminar—on the brochure it said July 2-5. This was July 2. “The seminar begins tomorrow,” they said.

Was I disappointed? No. A few months ago I had dreamed of having a get-a-way , a writing retreat. And there it was presented to me—a day alone, away from home. I had a private retreat in my Motel room.

Before driving back to my room I walked down the street of the quaint town of Mt. Shasta City, CA. where the mountain that is Mt Shasta hangs behind the city like a movie set backdrop, its size filling three-quarters of the visible sky. And this being July, its once white cloak of snow is now a shredded Tee-shirt. In town early morning vendors were setting up a street fair, and so after surveying their wares, I wandered into a shop where a book grabbed me.  I’m Rich Beyond  My Wildest Dreams “I am. I am. I am,” by Thomas L. Pauley and Penelope J. Pauley.

Now who could resist that title?

I bought the book, went back to my room and there sitting alone with the outside air 100 degrees, and my room cool as that mountain stream that runs off Mr. Shasta,  Pauley told me that once he was convinced that he could do anything he set his mind to do. “But why,” he asked, “have I gone bankrupt two times?”

Something was missing, he said. He believed he had the missing piece, and he was offering it to me. “First, he said, “get yourself a 79 cent notebook." I had a 19 cent one, so I was already 60 cents ahead.  "Now make sure you have privacy and time—at least an hour to complete the next chapter."

Write at the top of your page

But don’t “Want” it. Own it. Write it as though you have it already. We don’t want our little universe genie to think we only want something. (He’s so literal he will focus on the want not the have.) We want him to know we are serious about having it.

Write on only one side of the page. (Leave room for growth.)

Skip a line between the items on your list. (Tell the Universe we believe in abundance.) Besides I have a sneaking suspicion Pauley wants us to add more later.
Now make your list.

At the end of my list my brain was sparking, and so let’s you and I take a break. I will get back to you…it won’t be long, I promise. There is plenty where this came from, and I haven’t even begun the seminar yet.

I know I am not telling you anything you don’t already know, but having it spelled out is such a kick, I had to do it.

To our mutual success.


Next installment: “The Secret Ingredient”

P.S. Ok, I'm cockoo. I know it, but I have begun another blog. It was formerly "Where Tigers Belch," now it is Grandmother Grey Wolf. It will focus on the spiritual side of life,  Come join the pack--we will dance with the wolves. 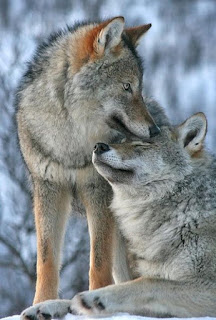 http:/www.grandmothergreywolf.blogspot.com
Posted by Jo at 10:19 AM