Our (used to be) "Green Trail of Bliss" that was our driveway. And there is good ole Bear lying in the middle of it.

Barry, the caretaker who lived on our property before us, called our place, "The most beautiful spot on earth," and the name given to it by its owner was Pu'u Honoa, meaning  "Mount of Refuge."

Perhaps it will be that for the people who travel Railroad Road.

And now I wonder if while widening Railroad Road the caterpillar crew found our cement cow.

Oh, you don’t know about the cement cow? Guess you will have to read the book. The Island. 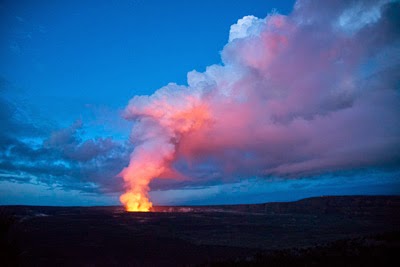 For the past few months lava oozed its way through the jungle, burning a swath aiming for the town of Pahoa. The prediction was that it would go straight through the market place, thus the grocery store, Malala Market, closed, and other stores in that complex closed as well, the tire shop, the hardware store, the propane supply store, Island Crazy, the Urgent Care facility and FED X where we Faxed so many documents we became friends with the beautiful clerk. The Subway Sandwich shop is there, and the bakery where they made the best butter mocha’s in the world.

Scientists predict that if the lava will eventually cross the highway and cut off the route to the rest of the island, Hilo. Kona, Volcano, Black Sand’s Beach, all that and more. The front stalled 550 yards before reaching the market place and has widened out and changed directions threatening they say the Police and Fire Station.

Hey, what about those other buildings sitting in the path? 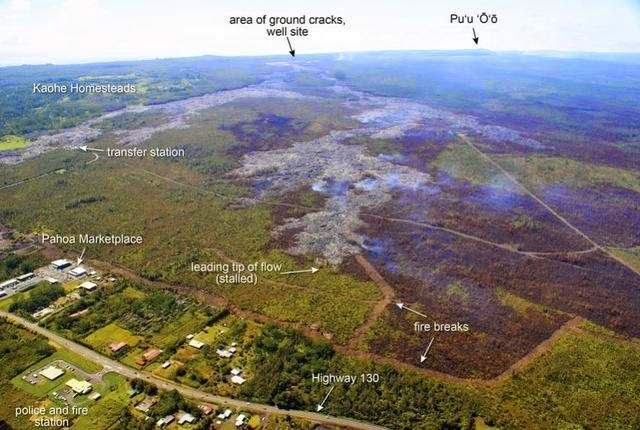