Stop Me Before I Buy a Horse Again

Or encourage me depending on where you stand.

Daughter, grandson and I are leaving tonight to attend the Hermiston Horse Auction—the trip is my Christmas present from my Darling Daughter.  We haven’t attended the auction for over 6 years, but now we are back in Oregon, and the Hermiston Horse Extravaganza that happens three times a year, is an event to be taken in.  This time Little Boy Darling will have his first exposure to an auctioneer who sounds like a horse's hooves at dead run.  LBD can take in the chaos of the ring, and see horses of all shapes, sizes and conditions.

We are going just to look.

What if, though, I wonder, I see a horse I can’t resist. We have no place for a horse. I don’t need a horse. Horses are expensive…

But what if I love him?

What if he needs me?

My husband would kill me.

One year at the auction a girl was wearing a tee-shirt with the inscription, “My husband didn’t ask if I bought a horse, he asked, “How many?”

About twelve years ago I bought my horse Velvet at the Hermiston Horse Auction as a six month-old filly-the prettiest little foal on the premises. As she was being led down one of the corridors, she turned her head to look at me—that will get me every time. I said “She looks like Velvet,” and thus I called her, and thus I decided she was my horse.  Having never bid on anything before I was filled with adrenalin, so I would nod to daughter who would then hold up the bidding sign. Someone was bidding against me, but that was MY HORSE. We weren’t very subtle with our bidding…I went over my limit, twice over my limit. The bidding was heavy, and when I won, the arena burst into applause. A cowboy came up to us later and said, “Watching you two buy a horse was more fun than buying one myself.” 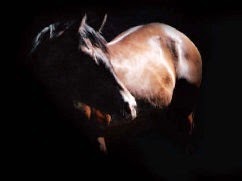 Another time two Norwegian Fjord horses were placed for sale—a very distinctive horse, cream in color, round in body, and distinguished by a white mane with a black stripe down its center. There were two horses in the sales ring and three cowboys fighting for them like playing musical chairs. One cowboy would pull another off his horse and climb aboard (they are rather short horses) then race around the arena trying not to be caught. One man’s jacket was ripped to shreds. The audience loved it, and I am sure the horses sold for more than they would have without the show. Daughter would have bought one except she felt the price went too high.

I have to stop reminiscing, but I did sell a horse there a couple of times, once for myself—a horse that bucked with Darling Daughter (DD), and another for DD. DD decided perhaps she could make money on horse trading, so she bought a horse in Eugene, a sweet horse named Sweetie whose owner didn’t take care of her feet and she will probably suffer for it the rest of her life. I had my Ferrier tend to her feet, I rode her a couple of times just around the yard and found she was very gentle, then  DD and I hauled her to the auction where she sold to a very nice lady.

A few months later Sweetie’s owner called DD. “Who was your horse bred to?” she asked. “We just had a baby.”

P.S. That Kickstarter project I placed at the bottom of the page began yesterday and they met their quota in one day. Congratulations Dale.
Posted by Jo at 10:09 AM