We have met the enemy... 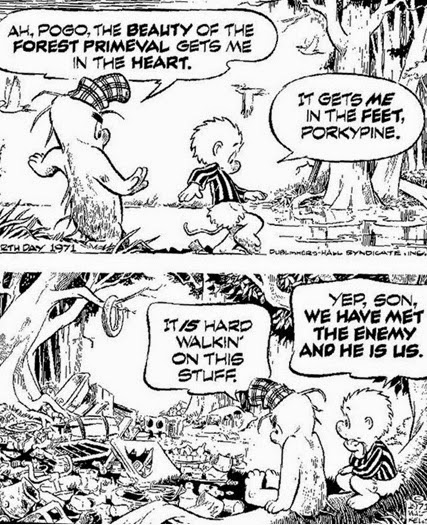 Have you ever had a thought rattling around in the back of your mind, an idea that is hard to articulate, but it seems to be something you ought to grab a hold of?

That’s happening to me right now. I’ve been reading a book titled Choosing Easy World by Julia Rogers Hamrick. At first the book seemed so simplistic, I pushed it aside. Then it called me back. When Hamrick began talking about “Difficult World,” I perked up.

There appears to be a Difficult Dictator that yammers in our heads, that feeds on difficulty, that tells us we aren’t good enough, we will never make it, others do, of course, but not us, that we are too old, too stupid, too disconnected to be successful in our endeavors.  Why old Difficult Dictator does that I don’t know, he appears to feed on worry, stress, and making things hard. Most of us have had times when can we decide to choose the easy way and this old dictator grabs us by the throat. Some call him the Ego. Why though does the ego want difficulty for us?

It could be conditioning. It could be that working, striving, pushing against have been drummed into us for so long it has penetrated our beings.

Now, this is not to say that a challenge is not rewarding. Think of music, the arts, athletics, solving a mathematical proof, a law proof, when we arise triumphant it is a giant hit. What I am saying is that there is a pervasive difficulty regarding life that is not necessary, is not healthy, and does not support the magnificent beings that we are.

And this is where that rattling thought in the back of my mind comes in. We hear about how the media is conditioning us, about the “Shadow” government, the government behind the government that pulls the strings.  We hear that the “Grays” control us, the “aliens,” are out to get us, and the Illuminati have been lurking in the shadows controlling world affairs for millennia.  And I wondered, could be as Pogo said long ago. We have met the enemy, and it is us?’

I am touching my chest.

A heartfelt thanks to you wonderful people who have followed me. Words cannot express my gratitude...a picture maybe?