The Harder We Try, the Worse We Do the Thing 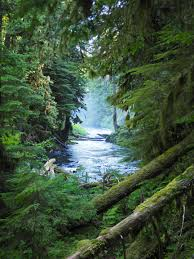 Morning on the McKenzie


When I was 13-year-old my folks, and I drove through the McKenzie River area, and my mother raved for years after. She thought that drive was the most beautiful she had ever seen. She came from Illinois, not mountainous or cascading river-laden. We lived in The Dalles Oregon, on the Eastern side of the Cascade Mountain Range. That mountain range serves as a rain shadow, causing rain to fall on the western side, but not the eastern. We lived on the eastern side, where the vicinity is barren and dry nine-tenths of the year. (Oh, but the springs were glorious during cherry blossom and wild-flower time.) However, McKenzie’s green was to dry vegetation eyes like a camel driver’s to an oasis. The McKenzie River is one reason my husband and girls moved to Oregon. When we visited from California, I said I hadn’t been to Oregon until I saw the McKenzie.

The McKenzie River area is on fire.

I awakened three days ago to see the sky golden, with a rosy glow I had never seen, as though someone had shined a spotlight on a treasure-chest of gold with a few rubies in the mix.

I called to my grandson,” Come look at this, it’s gorgeous.”

I thought there was a little smoke in the air from field burning, along with the glow of sun-rise.

When I heard about the fire, I dropped into grief. Our beautiful McKenzie River!? (The river will survive, it’s the forest that’s falling, and people are losing their homes.)

I felt as stupid as the dinosaurs in a cartoon watching a comet barreling toward Earth, and them awestruck they let out an, “Ah.”

At noon, the kitchen window was black as night unless you got real close and looked into the backyard. You could almost see the yard.

Wildfires are raging many places in Oregon and California. Three days later the sky is socked in with gray, and Junction City found another reason to close up shop, and tell people to stay inside. They say that global warming is causing more fires than in the past.

Pray for the Earth and its people.

Here’s what I intended to blog today. Oh, you know what? I read this morning that people like VLOGGING more than blogging. Vlogging is Video blogging--that word sounds more like what we have outside.

And here I am dealing with little old-fashioned words.

But, here they come:

When you hear "Ask, and You Shall Receive," don't you say, "Hey, I've been asking, I've been working, where's my stuff?"

'But how can you relax while your fingers are rushing over the keys? Yet they have to relax. The singing teacher and the golf pro say exactly the same thing. And in the realm of spiritual exercises, we find that the person who teaches mental prayer does too. We have somehow to combine relaxation with activity…

"What has to be relaxed is the personal self, the self that tries too hard, that thinks it knows what is what, that uses language. …We have this curious fact of the law of reversed effort: the harder we try, the worse we do the thing." —Aldous Huxley*

I have heard this concept from many people that the harder we push against something, the more it pushes back…and it has mystified me.

They say to work hard. To aim for your goal. The Universe likes action, and then comes the conundrum of the thing resisting you.

Have you gotten it? Do you know what I'm talking about?

Okay, take a day where you are out of sorts. Does the day go well for you? Not me. I drop things, I get frustrated that it takes three times to get anything done. Once you get a momentum going, it keeps on going downhill. Once a teacher said that you can have anything you want as long as you don't want it.

That totally annoyed me.

He didn't explain it well. In a way, he was right, but not in a helpful way.

You should want the thing. You can't help but want it. Wanting is a part of being human, and we ought to want, desire, have goals, and projects to complete. It's the juice that runs us. And don't think it's not spiritual to want. That's crazy.

Think of Walt Disney, he said to have a dream bigger than you are. He began the Florida Disney World but didn't live to see it completed. Don't be afraid to dream big.

I get it about the thing you want pushing back.

Let's see if I can explain it. One way of looking at it is that much is accomplished with a glad heart.

When you tighten up, grip until your temples are pulsing, when you get angry that what you want continues to stay out-of-reach. The very thing you are asking for either eludes you or accomplishing it takes about as much work as pushing a piano through a transom.

Jim Carrey said it quite succinctly, "As far as I can tell, it's just about letting the Universe know what you want, then working toward it while letting it go of the how it comes to pass."

The teacher Abraham admonishes us to get into a happy place before asking for what you want or beginning your work. Think of a painter; it appears that somehow their emotions get painted into the picture? So, it is with musicians. T

As we have a momentum happening with an out-of-sorts-day, we can have a momentum happening with a Glad-day. Your day is perking along; you're happy. The next thing goes well, you're rolling, and your day ends with you happy as a puppy with a bone. I know it's easy to be upbeat when things are working. It's not so easy when things aren't going according to plan.

The WORK is getting ourselves out of the slump, not pushing harder at the thing we want or do not want. (Except maybe fires.)

You know how it feels, it's like holding something with a gentle hand. You want the thing, you asked for it, now allow it to come to you.

I hope you can tap into the magic of this transition to let go and embrace change. Plan for your future adventures - there is no reason to delay them, even though none of us even really know if we can make them happen.

Planning for them sends out a signal that you're ready and committed, which opens many unseen doors. –Caz Makepeace

I've continued daily to do my "30 things I love" exercise, and understand why it's 30 instead of one, two or three. You get into a roll. I've noticed, too, that soon I'm loving things that haven't come to pass yet, like "I love that my leg is healing."

Carry on with love from Jo

*(Aldous Huxley motivated me to talk about my experience with vision training, so I'm looking to him for more information. I'm writing a booklet on vision training for those interested, as thanks for their many requests. )

Email ThisBlogThis!Share to TwitterShare to FacebookShare to Pinterest
Labels: Aldous Huxley, Getting out of the slump, Law of Reverse effort, Magic, Momentum, Wanting/getting

Look at the Magic

Okay, I’m awake. It’s 5 a.m. I decide do some editing on my Island book.  I go to my computer, and it’s like grand central station around here. The cats figure a closed door is an invitation to ask someone to open it. Zoom Zoom, traipses across my computer, purring, rubbing against me. For a skittery cat, he is affectionate when nobody else is around. Obi, Nina’s cat, tries to bury a piece of tissue paper on the floor. (He will try to bury my coffee too. He is the cleaner-upper around here.) Peaches, our poodle, wants out. Bear comes into the room, then he wants outside. Well, the sun’s up, and the animals have settled down. Time to pack Neil’s lunch.

Yesterday five-year-old Grandson was sticky so I convinced his to let me spray him off with our shower hose. Reluctantly he got into our tub, then decided that spray was pretty fun, and after he doused me with water, I closed the shower curtain, and was wiping up the floor.

From behind the curtain: “I’m sorry.”

On Monday, a good friend commented that if we are skeptically optimistic, the world is magic. And I decided to look at the magic, for I’m tired of reality.
So yesterday I tried to find a quote I remembered from Ray Bradbury. I thought it was this: “The world is a magic place or it should be if we don’t fall asleep on each other.” Maybe it’s his, maybe not, I can’t find it.  I took pleasure, though, in a memory of Bradbury. It was a warm night in San Diego. My husband was going to an Optic Conference. I almost didn’t accompany him as I had some wounds on my face I didn’t want to expose to the public, but they were small, and Ray Bradbury was the keynote speaker—that motivated me, scabs or not.
I don’t remember what he said, except that he always raised his audience to heights of stupendous expectations. Afterward I went up to him and instead of asking for an autograph, I asked to shake his hand. He said, “How about a hug, and gathered me into his arms in a big bear hug.” Gosh I wish some of his magic had rubbed off.
This is how I remember him. 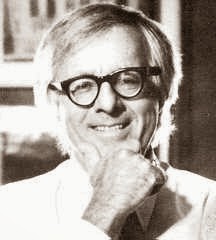 And, what do you think of this? From the wisdom of Bradbury:

I spent three days a week for 10 years educating myself in the public library, and it’s better than college. People should educate themselves—you can get a complete education for no money. At the end of 10 years, I had read every book in the library and I’d written a thousand stories.

“I have never listened to anyone who criticized my taste in space travel, sideshows or gorillas. When this occurs, I pack up my dinosaurs and leave the room.”
― Ray Bradbury, Zen in the Art of Writing

“Do you know that books smell like nutmeg or some spice from a foreign land? I loved to smell them when I was a boy. Lord, there were a lot of lovely books once, before we let them go.”
― Ray Bradbury

And here I am writing an eBook.

And finally, "You must stay drunk on writing so reality cannot destroy you." --Ray Bradbury

All followers will be loved up one side and down the other--
I see my Google + follows widget wasn't alive. If you would like to add you name, please see directly below.  Hit Google + followers. Yeah. You are an angel.