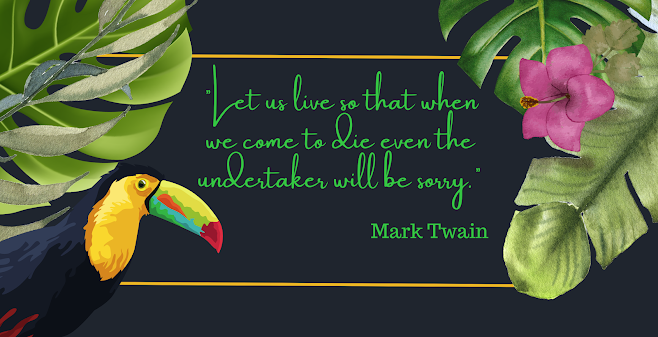 I wanted to quote Mark Twain in my book The Frog's Song, but the editor kept taking them out.

Publishing companies must be cautious about quotations and have permission to use them. I thought that Twain had been quoted so many times he was public domain.

Nope. Only books before 1923 are public domain.

After that, one must have permission to quote them. (I guess Hal Holbrook acquired special permission to do his one-man show on Mark Twain.) Twain's quotes are all over the place, but not from the book MARK TWAIN IN Hawaii, Roughing It in the Sandwich Islands. Hawaii in the 1860s. It was copyrighted in 1987 by A. Grove Day, and thus was off limits for quoting.

The book MARK TWAIN IN HAWAII was compiled from the series of 25 articles he wrote during his four-month visit to the islands. He was 31-years old when he got off the ship in Honolulu on March 18, 1866, and had only recently adopted the pen name Mark Twain. Twain was not a novice but not famous either when he landed the exotic assignment of writing a series of articles for the most influential newspaper in the American West, The Sacramento Union.

In a letter to his friend Charles Warren Stoddard in Hawaii (Octobers 26, 1881, Twain wrote: "If only the house would only burn down, we would pack up the cubs and fly to the isles of the blest, and shut ourselves up in the healing solitudes of Haleakala and get a good rest; for the mails do not intrude there, nor yet the telephone and the telegraph. And after resting, we would come down the mountain a piece and board with a godly, beech-clouted native, and eat poi and dirt and give thanks to whom all thanks belong, for theses privileges, and never house-keep any more…what I have always longed for was the privilege of living forever away up upon one of those mountains in the Sandwich Islands overlooking the sea."

I considered that book to be such a gift. I often wondered if the previous owner left it behind by accident or design. I found it in the Macadamia Nut processing shed behind our house. We processed no macadamia nuts during our stint. The only macadamia nuts I saw on the property we bought at the store.

We used the shed's wire shelving, meant for drying macadamia nuts, for storage, as we had moved from a large house into a small one. The much-needed extra space was a godsend, as our two washing machines (daughter's and ours) and one dryer stayed there the entire nine months of our stay. We preserved electricity (solar power) for more important things, like lights, the water pump, computers, and watching DVDs at night. Daughter and I, with little grandson in tow, used the Laundromat, where water and electricity wasn't an issue, and my little grandson watched Finding Nemo for the first time.

We have a washing machine and a dryer in the house now and abundant water and electricity. Oh, happy day!

I've told you all this before? Oh, sorry. It all came back to me this morning as I sorted papers and found Mark Twain's Tips for Living a Kick-Ass Life, by Henrik Edberg, dated May 16, 2008.

Edberg dated his article, May 16, 2008. That was before we moved to Hawaii in December of 2009, when I had no idea Twain had written about the islands. Neither did I did not know that his 25 articles are the very best ever written about Hawaii. Finding such gems as Edberg’s article is why I need to attempt organization once in a while.

I won't copy everything Edberg wrote, but I will list the tips.

"A man cannot be comfortable without his own approval."

Your limitations may just be in your mind. "Age is an issue of mind over matter. If you don't mind, it doesn't matter."

Lighten up and have some fun.

"Anger is an acid that can do more harm to the vessel in which it is stored than to anything on which it is poured."

Release yourself from entitlement.

If you're taking a different path, prepare for reactions.

"A person with a new idea is a crank until the idea succeeds."

Keep your focus steadily on what you want.

"Drag your thoughts away from your troubles...by the ears, by the heels, or any other way you can manage it."

Don't focus so much on making yourself feel good.

"The best way to cheer yourself up is to try to cheer somebody else up."

Do what you want to do.

"Twenty years from now, you will be more disappointed by the things you didn't do than by the ones you did. So, throw off the bowlines. Sail away from the safe harbor. Catch the trade winds in your sails. Explore. Dream. Discover."

Check out Aloha tee-shirts on Etsy: 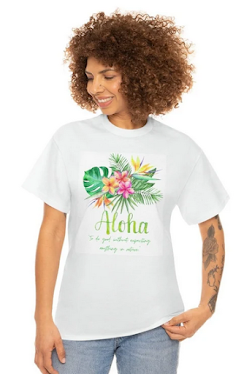 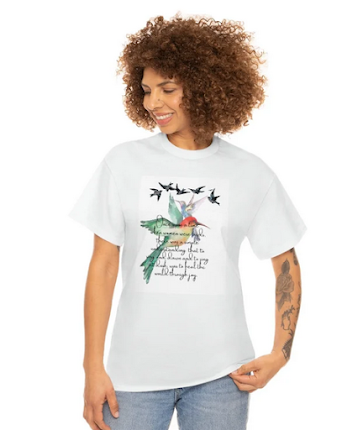 "Once upon a time, when women were birds, there was the simple understanding that to sing at dawn and to sing at dusk was to heal the world through joy." 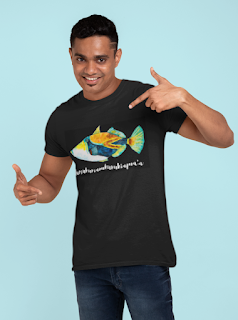 Humuhumununakiapua'a, Hawaii's state fish. We practiced a lot trying to pronounce that one.

After an 8-year term he was demoted for a time, but has been reinstated. Now he swims with stately vigor. 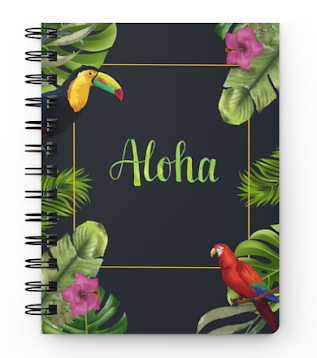 This notebook will lay flat which means it won't fight you by closing the pages as you are placing passwords of whatever on the lined pages. I like my "Chirp" notebook for it has quotes, but I prefer a spiral binding. This notebook has a lined interior, no quotes, and is available on Etsy.