If We Choose to Accept it.

But first, A rainy morning at Dutch Bros, and a free Pupaccino for Sweetpea. 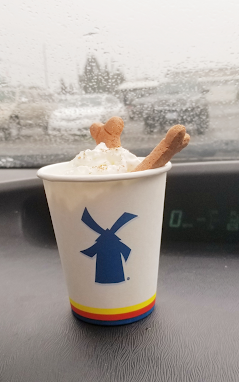 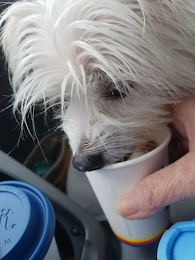 "Our lives begin to end the day we become silent about things that matter."—Martin Luther King Jr.

I don’t want this site to be political. However, I was riled yesterday when I heard—see news come to you whether you watch it on TV or not—that the President of the United States, a country that stands for equality and justice for all, would not condemn white supremacy. When pressured, he hemmed and hawed and finally said they should “Stand down and stand by.”

That sounds like he wants to use them later on.

The news today is that he has the virus.

That changes his health, not his political bent.

Where to go from here?

I’m going for the thought that feels best. Hope, trust, belief in the goodness of people. Believe that people want a brighter day, believe that the color of one’s skin is simply a matter of melanin—the pigment in our skin responsible for color. White Supremacy?! That’s a crock. Let’s believe that it’s time our children were “judged not by the color of their skin, but the content of their character.”

Remember who said that? Or, is it just old folks like me?

How did our society breed dissent and bigotry?

People believe what is drummed into their heads, day and night, repeated over and over. And like it or not, all being equal, positivity or negativity, negativity wins. (Initially, not ultimately.) Why do you think they tell us bad things over and over?

Our mission, if we choose to accept it, is to overcome negativity bias.

(Negativity Bias is the phenomena that negativity has an emotional component that makes it REMEMBERED. Perhaps noticing the negative, the fearful, could have had survival value long ago when we evolved into upright beings. The ones who were always on the alert for danger escaped that danger and survived to procreate more fearful human beings. (That's a simple answer. I don’t really know.)

So, it’s back to fear again. It’s the thing to guard against. Daughter dear presented this to me today: “What if human beings were given a powerful gift, and they were too stupid to know it?”

One might say we didn’t know we had it. One could say that it was frightened out of us. Perhaps it was withheld from us, or taken from us. Old mythology tries to explain our lack of knowledge by giving us this story: After the Creator created man out of mud, he placed him and his mate in a beautiful garden, then forbid him to eat of the Tree of Knowledge. When they did take a bite (inquisitive kids), they were kicked out of the garden and made to work for their living. (I won’t even go into that they blamed the woman. (Yep, we’re the inquisitive ones. And any wise parent knows that in time the kids would eat of that tree.)

The Mayas (from the Popol Vuh) say that after creating man out of maize, (the first try, making man out of wood, broke), the man, thankful for life, said, “Let us give thanks to the creators, for now, we can see what is near and is far.” The creators mumbled among themselves and said it is not good that our creation can see near and far, for then they will be as powerful as us. So, they blew mist in their creation’s eyes so they could only see what was near.

It would appear that someone knew that the human being was more powerful than commonly thought and that somewhere along the line, he lost it.

What if we find it?

Daughter Dear’s investigation, the Law of Attraction, for want of a better word, says that we have the power within us to create. The brain doesn’t know what is physical and what is imagined. For example, a study where one half the people exercised their index finger, the other half visualized exercising their finger. The ones who envisioned the exercise had the stronger finger. Daughter dear is gearing up to do a book and enrolling me. It would be a simple book. Perhaps an activity a day.

“But these would be easy and fun.”

“Fifteen minutes a day to change your life. who wouldn’t want that?”

And I began the day with nothing to say.

After I read the last line of vol 4 (“Where’s my place?”), I turned the page looking for the answer.

No answer came from the blue. As with life, it expects you to find your own way. Sometimes, though, we get a little help from our friends, as here with the jungle lady.

Let’s see what she has to offer:

“What is your name?” I asked my blind seer.

“Yes, Jo, I’ve known you since the beginning of time.”

“You have!” I exclaimed and then thought, Okay, really? Now I have a demented old woman on my hands. Maybe I better be on my way.