When my husband's father was watching a boxing match on television, you had to stay an arm's reach away, lest you get clobbered. Not that he intended to hit you, he was acting out the moves he saw on screen, punching, and swinging.

I have learned since that we have mirror neurons that don't know the difference between watching and experiencing. Notice how you jump when something springs out of the darkness. Your pulse quickens, you sweat, your heart races. My father-in-law was really into it. Even a make-believe movie can do that to us. That makes me wonder about watching violent movies. Yes, yes, I know, without conflict, you have no story, but there is internal conflict in most everyone's lives, we want to see how you overcame it.

I just listened to https://londonreal.tv/gregg-braden-raising-human-consciousness/, an interview with Gregg Braden on LondonReal with Brian Rose. They were talking about "Raising Consciousness."

I'm a traitor to my biology major, where evolution was the primary focus. Of course, evolution has occurred—plants and animals change over time, new species are being born, but I was delighted to hear Braden say that Darwin had it wrong in this regard: "Nature is about cooperation, not competition."

I always hated "Red in tooth and claw." Yes, animals eat other animals, I'm sorry it's set up that way. But have you noticed a stratum of African animals living peacefully with each other, lions lying among the zebras—until somebody gets hungry?

Think of the brain's function. First and foremost, its purpose is to help us SURVIVE.

In this economy, it means having a dependable income.

The second function of the brain is trying to make us SAFE. We want a home, shelter, a safe place to be.

Once safe, we want a TRIBE.

A tribe will stick with us if there are any social threats. Evolutionally speaking, the tribe was there for us. We depended on our tribe for survival: they nurtured us, helped us gather food, and provided protection against predators and enemy tribes. Social relationships kept us alive.

"Perhaps nature," wrote psychologist Naomi Eisenberger, "taking a clever shortcut, simply 'borrowed' the existing mechanism for physical pain. Instead of creating a new one from scratch, which is how broken bones and broken hearts ended up so intimately interconnected in our brains."

I'm writing about the brain because I want us to come through this current emotional trauma with an understanding that we can be hurt by constant turmoil. Once we know that we are a product of our biology, we can make a conscious choice to choose patience, love, and understanding.

I know that human beings have, since the beginning, used Conflict as a means to resolve differences. Why is that, when we yearn for peace?

A baby doesn't see the difference between people of different skin color, they don't see Asian, or African, or Irish. They have to be carefully taught.

Down through the ages, we have been taught to be afraid. It has left us shell-shocked. Sayers taught us that humans are evil by nature, that original sin is inherited, and that our way back to the heavenly fold was to follow their teachings. Deviate from these laws, and hell was waiting for us. That's the mind of an angry, vindictive person. No wonder humans are so afraid of death. We just can't be good enough.

We were afraid of reprisals if we deviated from the norm. Kings determined the canon of the Bible (what went into it, what was left out). Inquisitors destroyed dissidents who declared a different way of thinking. Invaders desirous of land, destroyed its inhabitants, Dictators whose addiction was Power, wielded it over the masses which were just trying to live their lives. People were dragged out of their homes and put in concentration camps. People with the Power to do so collected slaves to work for them.

When we have problems that threaten our survival, safety, and tribe that would undoubtedly knock us off-kilter.

It is time for a new way.

I once mentioned in an earlier blog a Hawaiian teaching called ho'oponopono, which is simply to say, I'm sorry, please forgive me, I love you." It doesn't have to be directed at a specific individual, country, or race, just saying it makes a difference. It is getting back to sweetness we were meant to live.

The Hawaiian word ho'oponopono comes from ho'o ("to make") and pono ("right"). The repetition of the word pono means "doubly right" or being right with both self and others. In a nutshell, ho'oponopono is a process by which we can forgive others to whom we are connected.

Braden emphasized that human beings did not appear on the scene due to a long, slow, natural selective process.

Waiting for a beautiful hairless redhead mutation to appear on the scene would take a long, long time.

And we did not descend from Neanderthals. We have some Neanderthal DNA in us because we lived alongside them and had boyfriends and girlfriends.

Our DNA changed so radically from primates that it appears to be intentional.

If our brain isn't a product of evolution, then does that imply a purpose?

If we follow the evidence back (reverse engineer), perhaps we will come up with a model. When evidence doesn't support a story, we need a new story.

We are still wired the same way as that new primate who happened upon the scene some 200,000 years ago--Survival, safety, tribe.

Braden said he wondered why chimpanzees couldn't sing since we share 99% of our chromosomes. (But then we share about 50% with a banana that doesn't sing either.)

We, as generations before us, are still searching for a Promised Land.

The enslaved Israelis rallied behind a leader who declared to the governing body, "Let My People go.

Polynesian Wayfarers took off in big Catamaran canoes across the vast ocean in search of new land.

American pioneers packed up their belongings into a covered wagon and set off in search of a dream.

You're trudging across the prairie on a wagon train after hearing the call to a new life.

You're attending to business. You are keeping the wagon on the trail, tending the oxen and horses, milking the cow that, bless her heart, is also trudging along tied to the back of your wagon. You're keeping the children fed, bacon (salt-pork) in the morning, beef jerky for lunch, beans, and biscuits for dinner. When the hunters bring home venison, the entire train has a barbecue for dinner. You are keeping the children from sunburn by making sure they wear their hats, and when you stop to rest, you pull thorns from their little hands. At night you kiss their blistered feet and tell them stories of the farm awaiting at the end of the trail where they can have a dog and a horse of their own.

Before the Wagon Train pulled out, I signed up for a job as a scout. I'm riding ahead, looking for the narrowest spot to cross the stream. I bring back news of where the road has been washed out—the trail made by wagons that went before us. We are stealth, my little horse and I, disturbing little, at one with our surroundings, slipping into places where a big wagon and oxen cannot go. I can see if there is any game in the vicinity, for they rarely run from a single horse and rider. I can scout out any inhabitants we can befriend or avoid. My horse can take me to the hilltops where I can see the vast terrain ahead, and be thrilled at the possibilities. 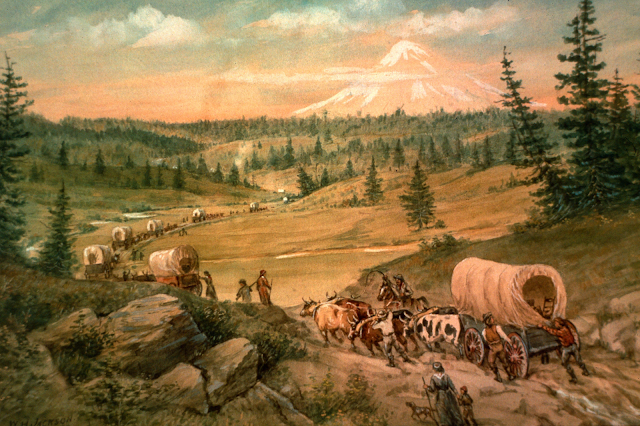