A View from My Desk

Nobody told me in the ad that my recently purchased item could be assembled with basic tools in three easy steps—a good thing because it couldn’t. I searched the Internet, found a desk I liked and bought it.

When I opened the box, I saw at least 100 pieces, not including screws, or those little wooden dowels you fit and glue into little wooden holes. (Glue included.) Tracks that supported the drawers needed to be screwed to the sides of four drawers, and their slip-tracks needed screwed into the desk’s walls to support the tracks. Four drawers had four sides and a bottom. There was a heavy iron frame that supported the bridge-like desk, and the top of the desk was so heavy I couldn’t lift it. All these items plus the box it came in and the Styrofoam that protected it were spread out on the living room floor.

Casey is my grandson. He’s 14 -year-old and a master builder, on top of that he likes doing it.

Three evenings later, I had a desk.

That freed up my kitchen table where I had been writing.

Remember the desk I had in Hawaii where I wrote all those blogs, and I could look out over the expanse of grass that was enlivened every morning by the Goddess of the Green? Oh, you had to be there. Or have read The Frog’s Song. My desk extended along one wall had a corner piece and another portion that Zoom Zoom, our cat, claimed. Zoom Zoom became brave after we moved to Oregon—even wandering up the street and sleeping in the neighbor’s yard, but in Hawaii, he was terrified. The desk was his haven, it was where he slept, ate, and grew fat. He left it only long enough to use the litter box. (Thank heavens.) Then, as though on springs, he bounced back to his spot.

He tip-toed out onto the porch one day then quickly scurried back inside. He must have thought that something big and scary was out there. But we had no bears, raccoons or snakes, only feral cats, rats, mongooses, and wild pigs. Nothing that would hurt him, but he must have figured, you can’t be too careful.

Well, there was one particular storm in Hawaii that made my blood curdle, and I’m generally not afraid of rain, but the coconuts were dropping like bombs, so a little kitty cat best stay indoors.

Are we afraid of coconuts falling?

There is always something to be afraid of, isn’t there? A virus, going against the rules, social disapproval, job loss, no food, no shelter, no one to care for us, wild boars.

Yesterday I heard Abraham tell of being on a plane where the flight attendant told the mother not to get out of her seat. She had three children, two beside her and a little boy across the aisle. When the plane’s engines roared, and the acceleration of the engines thrust him back into his seat, the little boy, separated from his mother, was terrified.

Finally allowed out of her seat, the mother cradled the little boy in her arms and cooed in his ear, “It’s okay. Everything is okay.”

I would have been out of my seat, flight attendant, or not. Now I want to take all the frightened souls in my arms and say, “It’s okay.”

The parent in us needs to calm the child in us and say, “It’s okay. Everything is going to be all right.”

There are people trying to frighten us. Hell, they are terrorizing us. Remember, frightened people are controllable, and controllers like manageable people.

Fear keeps us from our power.

I’m not saying we should run amuck, I’m saying question authority. Be in command of your own life. (One reader said, “I think I should go out and catch the virus and start herd immunity.) Most of those in command are mucking around, not knowing what is happening any more than we do. And you know the media has hyped this coronavirus to white-hot intensity. And you notice that when race became an issue, they hopped right on over to that. (Black lives have always mattered—why in the hell haven’t we moved past bigotry? I thought we were smarter than that.)

It’s time we thought for ourselves, instead of waiting for someone to tell us what to do. I was shocked to see how quickly people hopped to the prescribed way.  Wave around something scary, tell people to go home and stay there. And they do it.

Doesn't that frighten you a little?

Oh, I was talking about my desk wasn’t I? I’d offer you a coffee, but I am a distance away. But I will go to the kitchen and warm up a cup from my French Press (that keeps coffee tasting good for an entire day). You get your coffee, tea, or bourbon, whatever floats your boat, and come back. We have places to go and promises to keep.

My Naturopath says that coffee is dehydrating, and I should drink a glass of water for each cup—no wonder I spend so much time in the bathroom. 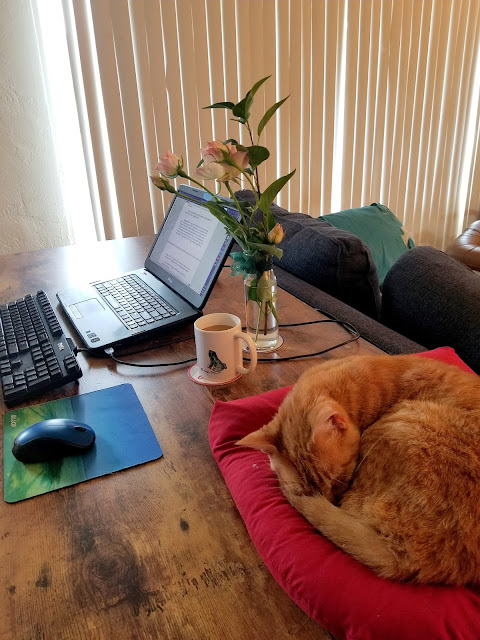 The coffee is hot, the roses have fresh water, the cat is Obi.

Have you noticed that the world has gotten so serious that we’re afraid to be frivolous?

One Epidemiologist said that we are killing more people with this lock down than the virus is.

People aren’t meant to be lonely. People aren’t built for continual fear. Fear should be short-lived, to protect us from danger, fight, or flight, not a constant strain. People are made for interaction, for free speech—not to be muffled. We came here to live abundantly.

Nelson Mandela (30 years in prison) said something to this effect: that you can imprison my body, but not my soul, or my spirit.

Victor Frankl (a holocaust survivor) said that it’s man’s search for meaning that sustains him.

Joseph Campbell isolated himself for about three years, and mainly, he read. Since he was interested in mythology, he chose that subject. He emerged the premiere authority on The Power of Myth.

“There’s an innate human goodness that shows up when our newborn is laid on our chest, or when we see somebody in pain. Everyone has the capacity to care. And sometimes it just gets blocked. We become hardened when we’ve been hurt.”—Jared Seide, from a Sun Magazine interview.

My daughter, who is a caregiver, asked me why some people just keep the TV on, and there is the news in the background, and they have no reaction to it? Sometimes the most horrendous happenings are shown, and do they get up and turn it off the screen, or be horrified? No. No response. Nothing.

Search for your passion.

Don’t let the world beat you down or numb you.

We need our tribe, someone who cares for us, someplace safe where we can share ideas without fear of ridicule. We can debate, but this polarization—I’m right, you’re wrong, has got to stop.

There is a room in a castle in Germany called the Rose Room. In the days when people lived in the castle, The Rose Room was sacrosanct, meaning what was said in that room was sacred, and stayed in that room. You could discuss whatever—rather like Get Smart’s Cone of silence. (Get Smart was a TV show, do you remember it? His cone of silence was a joke, though, it didn’t work—rather like pulling up one’s mask so the other person can understand what you are saying.)

People come from different belief systems, and I see how we, I, go to the areas that support that belief. As a result, sometimes, that belief becomes gospel. (That’s how we lose the scientific method when “Being right,” overrides “Truth.” Even scientists are people.

And there are those on the opposite side who have their beliefs, their interests, and they to go to literature, movies, or research areas that support that belief.

Then we come together—two separate lines of thought--and beat each other up. (Sometimes literally. Sometimes figuratively.)

There must be arbitrators in the world that can talk people down, that can see different sides, and thus calm souls in turmoil.

“It’s okay. Everything’s going to be okay. You are a powerful being, meant for great things—that’s the reason they are trying to keep us down.

Well, they don’t know who they are dealing with.

“They tried to bury us, but they didn’t know we were seeds.”-- Dinos Christianopoulos.

“You have been granted 2 billion seconds on this planet, give or take. You are a billionaire! Many billionaires, however, squander most of their fortune on bitter recriminations about how unfair everything is. Many of them are right, and it really is unfair. But you won’t get a refund from the universe for the time you spent brooding about the unfairness. You lose them just as surely as a second spent experiencing joy, only they don’t even give you something nice to remember them by.”-- Megan McArdle, Boomerang

Megan reminded me that politics is not the most crucial thing in the world. It’s just the one people talk about the most. That’s because everyone shares the government; only you are married to your spouse, and you live with your family.
Posted by Joyce at 2:27 PM

The forth issue of Where Tigers Belch, is available.

Where The Tiger Belches, is a quest to find that spot that represents your true self, your reason for being, your purpose. In The Alchemist, Paulo Coelho sends his shepherd boy, Santiago, on an adventure to find his "Personal Legend." It's a fairy tale, as is Where The Tiger Belches.
This small mailing will come, (if you request it) monthly in your email box.
It was sold initially as a monthly subscription for $1.99/mo. When you sign up for the year @ $12.99, you will get the first four issues, plus one per month totaling 13 issues. (The first month's was free.)
We're in the 4th month. I don't know if we will find where the tiger belches, we're making it up as we go along.
Come along, I need company.
You wouldn't want to leave me alone on the jungle trail would you?

Meet Jewell:
Where the Birds of Eden Sing website has moved. The new address is https://wherethebirdsofedensing.blogspot.com