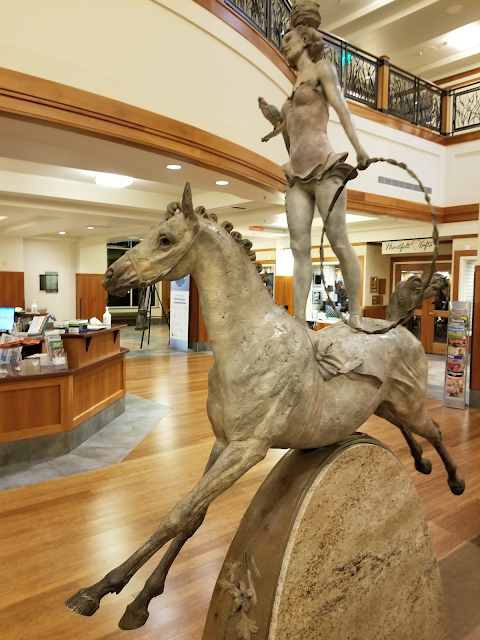 I snapped this picture before the lady at the receiving desk told me I couldn’t. I might inadvertently photograph a patron, she said.

I got this photo at Riverbend Hospital in Eugene, Oregon, where Husband Dear spent the past week. He’s home and recovering now, thank you very much.

I tried to capture the sculpture’s lovely description on the bronze plaque the lady pointed out on the wall behind me, but the picture came out a smear.  I guess I flubbed the picture as I was feeling guilty for taking clandestine pictures.

At home, I googled “Sculpture at Riverbend Hospital,” and there it was, Day of Days, a Sculpture by Ellen Tykeson, along with its inscription:

“The sculpture, DAY of DAYS, is a tribute to every woman’s life. As with all the elements included, this rider’s bond with animals relies on trust and cooperation rather than control. The horse is a metaphor for balance and the speed of our days. The parrot speaks tor the rhythms of teaching and learning. In the beehive reside industry and community.”

Here is a photo from her site: 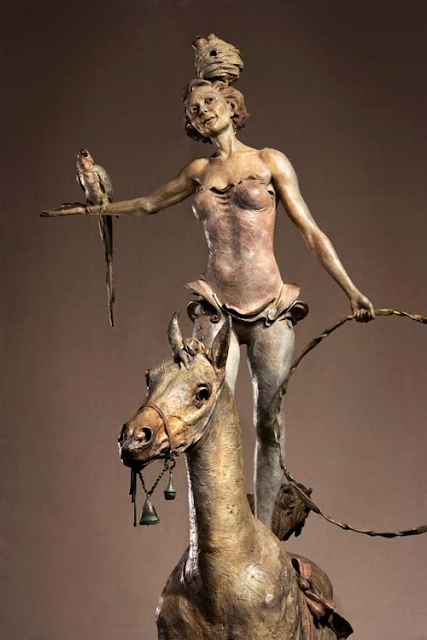 The curved structure holding the horse is an apparatus that causes the horse to rock if given a push.

Long ago, I innocently snapped another illicit picture before a guard told me that taking pictures was verboten. I lay down on a bench, aimed my heavy Nikon camera (see, long ago) at the ceiling, and snapped.

I caught the ceiling of the Sistine Chapel and of God reaching down to Adam.

Some say that instead of giving Adam life, God was giving Adam intellect. In 1990 Frank Lynn Meshberger, a gynecologist, identified the outline of a human brain in Michaelangelo’s The Creation of Adam.

Ellen Tykeson clearly explained her symbolism in Day of Days.
Unfortunately, Michaelangelo left his symbolism to be interpreted by others.

The cloak behind God bears a close resemblance to one hemisphere of the brain. Look at it, the cloak/brain also has a brain stem. 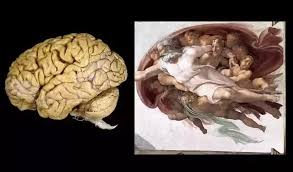 Artists have long painted secrets or references into their art. Could it be that Michelangelo painted a message right under the Pope’s nose and the Pope didn’t see it? Neither did many others through the centuries. Was Michelangelo saying that God was giving Adam, aka human beings, intellect, or was he saying that God exists in the human brain?

We can interpret art in many ways, which makes it fun.  And Michelangelo, given the time in which he lived, probably couldn’t say what he believed, so perhaps he said it with his art. Michaelangelo knew about anatomy as he dissected cadavers at an early age. And he had written sonnets saying that the intellect was the divine gift.

He also wrote how he wanted nothing to do with the painting of the Sistine Chapel ceiling, but in those days, who could ignore the Pope? I am a sculptor, Michaelangelo had said, not a painter.

Michaelangelo suffered greatly in the painting of the ceiling. It has long been thought that he painted while lying down.  He didn’t, he stood. (He still got paint in the face.) He had built special scaffolding to accommodate the awkward position his body had to take to paint over his head. He wrote that he had gotten a goiter from the experience and that his flesh fell to his knees.

Have you ever painted a ceiling? If you did, you probably had a roller and a long pole with which to do it. Even with a roller and a pole, the experience can do major damage to your neck.

Until next time, take care, and remember this, “There is more love in the world than hate, but hate gets noticed.”