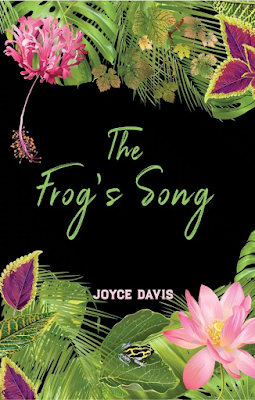 This happened after the book ended...

Our car and pickup were at the dock awaiting their turn to travel across the great blue ocean to land in Los Angeles, California.

I looked out over the emerald green that had been our property for the past year.


There was a great expanse of grass that lay between our house and the small auxiliary building that looked so Island daughter named it the Tiki Room.
Most every morning I watched from my computer window as the morning light spread across the green as though the Goddess was turning up her rheostat. 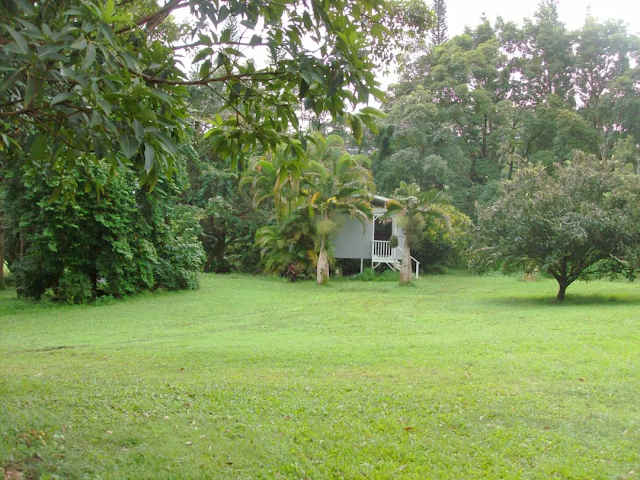 That last day, I walked through every room saying goodbye.


We loaded ourselves looking like the Beverly Hillbillies into the van and inched down “The Green Trail of Bliss,” that was our driveway, so named by our neighbors.

We were making our way to the airport.

We passed the Y in the road, where daily Hot Dog Guy sets up his hot dog stand. He hadn’t arrived yet with his best in the world hot dogs. We will miss him, his daily chat in the woods, and his hot dogs that fed us on many occasions on our trip to or from town.

Alongside the road, deep canyons carry water out to sea, and from the bridges over those ravines, we looked out over that incredible green dotted with red flowers that sit atop 100-foot trees like parrots.

I was struck again by the enormity of the ocean when viewed from the height of the highway.  I realized once again how many miles of water separated me from my first-born child and that without planes or boats to rescue us, we would be stuck.

That day, though, we had tickets in hand. We were packed. Husband Dear was driving. I sat in the passenger seat with my little dog Peaches on my lap. Daughter was jammed in the backseat beside her year-old son, a laptop computer, a diaper bag, and a purse while trying to avoid being sat upon by a 150-pound dog.

Behind her, the dog carrier with its top nested inside the bottom held cat carriers holding Hope and Zoom Zoom. We were aiming for the airport on the other side of the island.

About 50 miles away from home, a flagger stopped us. “A tanker rolled over,” he said. “It will take half a day to clean up the spill.” He waved us away with no suggestion of an alternative route.
We sat dumbfounded.

Our belongings were gone, the car and truck were gone, and that poor truck driver probably got the bejeesus scared out of him.

Bear, needed to be deposited with United Cargo by 9 a.m. as United Airlines demanded he go cargo, and we had arranged connections in L.A.
We were in shock.

A scream came from the backseat, “Get Me off this Damn Island!”

Husband and I stared at each other as angry purple ooze spread through the vehicle. “Take Saddle Road!” We say in unison. So we backtrack the 40-miles back toward Hilo to where Saddle Road exited the highway. We took Saddle Road up and over the mountain, down the ravines, over single lane bridges, and across the Texas look-alike countryside—with other cars that morning, since many had the same idea we had. We made it to United Cargo before the nine o’clock deadline.

However, at United Cargo, I had a sinking feeling as I watched through the windshield as Daughter spoke to a forklift driver who was shaking his head.
The dog kennel had been modified. He would not take it. Husband had modified it into a stretch limo for Bear. Continental Airlines carried Bear from the mainland in it. Aloha Airlines Cargo shipped him on the last leg of our journey, from Honolulu to Kona in it.

The fellow at United Airlines would not budge.

Okay, we careened over to Pet Co, as fast as allowable, where—miracle of miracles—they had the largest airline approved kennel available. The last time we visited that store they had none.

Daughter bought the new, expensive, airline-approved kennel. It would be a tight fit for Bear, but we figured he would have to manage.

We raced back to Cargo. We fit the top and bottom of the carrier together, tightened the wingnuts, and asked Bear to try it. He did compliant dog that he was. You couldn’t ask for a better dog.

They would not load him on the noon flight and told us that we had to go that night at eight o’clock.

We raced to the airport ticketing window where a nice man changed all our tickets to the 8 p.m. flight. Ah. We go back and rescue Bear from the confinement and the heat.

Okay, we were back at 2 p.m. We deposited Bear at cargo and went into town for a bite to eat with the other animals in tow. In route, we got a phone call.
They canceled our flight.

They scheduled us to leave the next morning at ten o’clock. I envisioned a hot night in the car, as the hotels on the island are not pet-friendly. And there was Bear confined in a kennel that fit him like a wet-suit.

We go back to the airport. Daughter reminded us that the Cargo hold closes at 3 p.m., which means Bear was locked in—oh, that was the reason we had to be deposited at two o’clock. We must wait until 6 p.m. as no person occupies the ticketing booth until then. There we encounter other passengers who received the same phone call we did. “What happened?” asks one. “The plane didn’t leave San Francisco,” says another. Bottom line: no plane.

Daughter and I shake our heads at the irony of it, how the island called us, how it got us there, and how we thought it was pushing us off.

I would have laughed except as I sat there on the bench at the airport I felt like the little anole I accidentally painted into the porch steps. I didn’t mean to do it, dusk was settling in, and I didn’t see that a little lizard was in my paint path. The following morning I found his flat little body, a lizard relief in the gray-blue porch paint.

So we sat in a hot, humid, airport waiting in Island time for a ticket booth to open. Six o’clock they said. No one occupied the booth until six. Okay. We waited.

I sat and calmed myself by watching Daughter and her son entertain themselves with the travel brochures—a fiery volcano, horseback rides, helicopter rides, zip lines, orchid farms. Husband was reading a book. Peaches lie on her stomach on the cool cement, her hind legs straight back as Poodles can do. The cats were quiet in their carriers. And Bear? You know where he was, in lock up.

Did we get our reason for moving to the island?  We were so sure the Island called us, and maybe she did, yet why were we still there?

My mind wandered back to the house we left behind only a few hours earlier. It is vacant, alone. But it isn’t alone, the neighbor’s horses will be right outside. They are using our property for pasture. The neighbors will water the horses from our new water tank, and in return for free pasture, the neighbors will mow the property.  Jeff, the carpenter we hired to help bring the Tiki Room up to building permit standards and will live in the Tiki Room. He will watch out for the house and property, and keep the property looking lived-in until it sells.

I called our neighbor and told her she could have our modified dog carrier if she would drive to the airport and get it.

I thought about my horses and how we wanted those ten acres because we planned to bring them, and ended up not shipping them. I thought about the sad day I gave them away, and Daughter gave away her two as well.

I hope they are happy and well cared for.

I think about Orville and Wilbur, those sweet goats. They have a good life, we know, for they were living at a Sanctuary. I don’t know about the horses.
I think of Daughter re-homing her ferrets. She had ferrets for 22 years, that’s how dedicated she was to our move to the Island.

“Be grateful for what you have and stop complaining,” said Zig Zigler, “it bores everybody else, does you no good, and doesn’t solve any problems.”

“You can hold me,” I told the Universe, “you can rain on me, mosquitoes can chew on me, but you can’t keep me here. You can give Husband heart trouble to make him leave—he was happy here, he would have stayed, but I am not having him die here.  None of us are dying here. We want to live, and it will be beyond the horizon that we do it!”

I felt a jiggle as my little grandson crawled up beside me on the bench. My telephone/clock whispered to me that it was 6 o’clock.

In-mass we go to the ticketing counter.

Whatever caused the log-jam of this day’s events was about to burst. I could feel it. It was not without fear, however, that we approached the desk.

Karen, the ticketing person, a take-command lady, changed our tickets to another plane scheduled to leave that evening at 8:55 p.m.

After a stop-over in San Francisco, we were scheduled to arrive in Los Angeles around nine in the morning. I was stunned. HAPPY DAY!

Lovely Karen called Cargo to have Bear shuttled over to our plane. She checked in all four animals, had them taken aboard, checked our carry-on’s—didn’t charge us for that service—bumped us up to first class, and we were off—just like that.

In First Class, there was food for the family and a glass of wine for me. I settled down with the prayer, “Get us to the mainland,” and lay my head against the seat’s headrest.

We taxied down the runway.

What was that I heard?

It was Peaches, our poodle dog.  I didn’t know the animals were right beneath us. She could hear us, and every passenger in the plane could hear her. And so embarrassed, not claiming we knew who belonged to that dog, we sailed out over the ocean to the tune of, “Yap, Yap, Yap, yap, yap, yap, yap…”

The year before this leaving day is chronicled in my book The Frog’s Song,released today. Whoo ho.

The publisher’s agreement is that to sell my books, I must be physically present, so I cannot sell from my site. I can provide a link though.

Use The Frog’s Song by Joyce Davis, otherwise, you will get many books on Frog Songs, one sells for $135.00, so I guess mine is reasonablely priced. You know a Kindle version is cheaper. Since I love the feel of the book so much I want people to run their fingers over an actual copy. 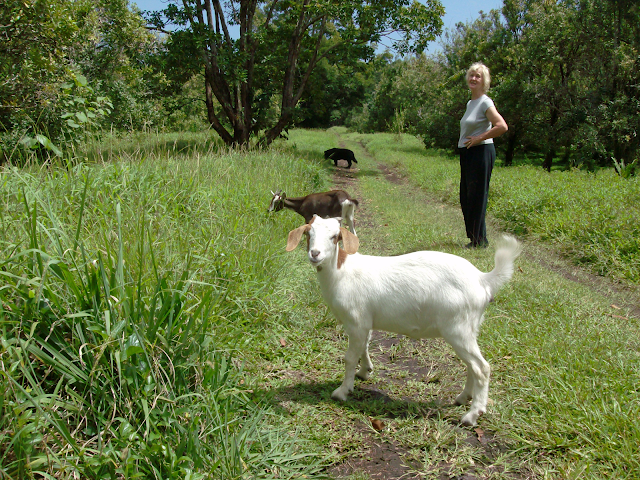 Do, Ra, and Jo with Bear in the background.