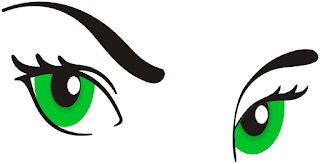 You’ve probably done it too. In school probably.

Last night with an ink dot on the edge of a napkin I performed an experiment and found the blind spot in my right eye.

I may have other blind spots, but we won’t talk about those. We’re talking about the blind spot everyone has. It is on the retina--that area at the back of the eyeball where cells (rods and cones) collect our images.

That space on the retina is blind for it is where the optic nerve exits the eyeball, and thus there are no receptor cells there.

I laid the napkin with its dot beside my focus point on the table. Still staring at my table spot, I slowly slid the napkin to my right. Suddenly Whamo! The dot disappeared.

Why am I telling you this? Well, it demonstrates the eye-brain connection, for the brain fills in that blind spot, so, unless we test for it, we don’t know it’s there.

Thanks to all you folks who asked that I write more on the subject of vision.  My last post was on February 28, 2019, titled, “Check Your Eyeballs.”

In response to this asking for more information, I thought, “No,” I don’t have more to say, except on rethink I do.

First, to reemphasize what I said last time: DON’T LOOK AT THE SUN.

Golly, some folks criticized old Doc. Bates saying he told people to look at the sun. He did not. His way of sunning the eye was to protect the pupil and have the sunlight shine through the white of the eye. (Cover one eye, look down, hold your eyelid up, let the sun come through the white area)  this procedure will encourage a chemical, visual purple, to respond more quickly to changes in light level—like walking from bright light into a dark movie theater.

I hate it when people run off at the mouth in criticisms when someone threatens the established thinking. This has happened over and over with new medical procedures. Heavens, my mother was criticized when she asked the doctor about natural childbirth. “You can just squat beside the road like an Indian,” he said. Not only did he insult my mother, he insulted those lovely Native American women who managed to have their babies without medical intervention, he also insulted his profession.

#Julia Galvin said that perhaps Dr. Bates Method of Vision enhancement is lost, and it will wait until it is rediscovered. Apparently, Bates was a bit pig-headed. That can antagonize people, but it also shows that pioneers in their field get fed up with the resistance they encounter, and probably become “Pig-headed.”

Beliefs are so firmly attached, that even when we want to accept a new idea, we must fight against our own negative bias.  You don’t have to do the new thing, just consider it as a possibility. Praise the pioneers.

Some say that near vision and far vision are dependent upon the shape of the eyeball.  If the eyeball is so rounded that the image falls behind the retina, the person’s vision can be blurry or unclear, and they are considered far-sighted. Near-sighted people have an elongated eyeball, and the image falls in front of the retina. They see close images clearly, but not far. (It’s easy to get confused with the near and far-sighted.)

This I know for sure: Glasses change the focal point.  If you’ve ever played with a magnifying glass you know how you can focus an image. That’s the way glasses work. (Praise to the person who came up with that idea--place a magnifying glass in front of the eye and focus the image on the perfect spot.)

The proponents of eye muscle exercises think that by exercising the muscles that surround the eye, it will pull the eyeball into its ideal shape. That way the light falls exactly on the fovea, that spot on the retina that contains the most cones that detect bright light and color.  This is the area of the best “visual acuity.
Many will give you instructions on how to find the tiny microfiber muscles at the top and bottom of the eye. I'm not going there, for I do not want anyone to put pressure on their eye.

Even a little change in the shape of the eyeball has an enormous change in vision.

It appears that it is the resistance to do the exercises and that is the downfall of these methods. I suppose having a trainer such as I had encouraged my results. Now, being a slacker, I need reading glasses.

All these exercises and concepts, that’s it, they are concepts, that if taken seriously and done correctly have been known to improve vision. Bates did not emphasize exercising the muscles, his was more of an approach to seeing, a relaxing into, an allowing.

I think one criticism of Bates was that he put little stock on the lens of the eye, which we know adjusts and accommodates allowing the focus to change near to far. The lenses tend to get rigid with the passing of time, which is one reason people need glasses later on in life.

I really liked #Greg Marsh’s description of palming. He described it as Yoga for the eyes. We have enough stress in our lives, and a moment of calm and relaxation feels really good.

This is easy and relaxing:

Do not cup your hands, but place the center of your palm over each eye. Overlap your fingers and bend from the hips over a table so to rest your elbows on it. You can palm while standing, but your arms will get tired, and that rather negates the process.  Allow your eyes to be gently loved.

Long ago when I was into horses and wondering why a horse needed to be trained on both sides, and when imprinting a newborn foal (massaging him) you need to touch both sides, I began researching the brain. There is such a strong brain-eye connection that one can’t study the brain without also including the eye. With imprinting, if, let’s say, one ear was left untouched, later on touching that previously untouched ear, the horse would act like he had a wild ear on an otherwise tame body. (It has to do with the corpus collosum, the bridge between the two hemispheres of the brain.)

One thing I want to get on my soapbox and scream is that while a horse has an almost 360-degree vision, he does not see well or at all for about four feet in front of him. So when approaching a jump he must calculate the distance and determine when to jump.

And here is my complaint, well, two, one is putting a horse in a box. This leaves him with practically no vision. If you can’t see for four feet in front of you, and there is a wall beyond that, where does that leave you? No wonder horses often go cockoo when confined. (A horse is highly conditionable, that’s the reason we can get them to do all the many things they have done.)

And this I am adamant against:  Moats behind a horse jump. “Ok,” says the horse, “I see the jump. I see how tall the hedge is. Cool, I can clear it. What! There is a pond beyond it?! Holy Moly. I didn’t see that until I was in the air.”

What are they thinking!

Are they trying to kill the horse and rider?

Oh yes, I’m writing about human vision, I do digress. I’m back.

1.     Wear glasses only when you need to, like to read and to drive… otherwise, allow your eyes to scan and be fluid and mobile.

Large black frames tend to further force the eye to look through a tunnel. I thought I wanted to make a fashion statement and almost got big dark frames but didn’t.
2.     Keep noticing movement around you allowing a collection of senses to come into play.

3.     Allow yourself to imagine. Natural vision functions from memory and imagination not only is it a physical process. Apparently, children use this to remember and to identify. It’s natural, we don’t even know they are doing it.

It’s fascinating that we use the phrase “I see,” meaning to understand.  And that so much emotion can be expressed through the eyes--like crying.

“Sensing is not the same as perceiving,” Aldous Huxley wrote. “ The eyes and the nervous system do the sensing. The mind does the perceiving, and much of preserving is related to the individual’s accumulated experiences, in other words to memory.”
To illustrate this, think of a microscopist. He will see certain things on a microscope slide a novice will not.

A city dweller walking through the woods will be blind to what a naturalist will see.

As kids we often saw shapes, animals or such, in the clouds, or tree branches, and we would tell our friend what we saw. My friend saw a lion, and the moment he pointed it out I could see it too.

My husband was the co-creator of a perimeter, a diagnostic instrument for the optometrists. This instrument measured the peripheral vision, and was a test for glycoma. The patient would sit with their head in a half dome where tiny lights would appear at random. The patient would press a button to indicate when he saw a light. This instrument would map peripheral vision and it could also detect brain tumors, for if a tumor was present, a portion of the visual field would be blank.

Another instrument that lost funding was a machine that would detect early diabetes. It had to do with light refraction, rather like seeing your shirt glow in black light.

When people say that the eyes are windows of the soul, one can imagine what they are talking about, for there is the brain reaching out to the world, taking in the glories of it, and in return sharing its secrets.