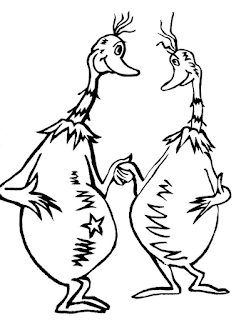 Art by Dr. Seuss--they soon forgot who had a star on their belly and who didn't.


Let’s begin at the beginning.

Before I met my woman of the day, I ran the gamut of Books, Publishers, and Journals at the AWP (American Writers and Publishers Conference and Book fair) located in Portland Oregon.

I wanted to meet my publisher so I preregistered for the conference, and come Thursday morning I got my butt out of bed, and into the car and drove the hour and a half to Portland—that with two stops took three hours.

When I got to the Regal Publishing table the number of which had been sent to me, she was not there.

She was busy getting a book out and sent her cohorts instead.

She was on the East Coast, I was in the West.

Oh well, no problem, I was here for some reason and happy that she is so conscientious and on target in getting her books out—mine will be happening in May. I love that woman.

And then I saw something that lightened my heart and gave me a good chuckle. A creative soul had tacked a huge sign behind their booth. “Come share your meniscus injury with us.”

Until a few months ago, I wouldn’t have known what a meniscus was. When mine folded over and tore into bits it gave me a good reason to learn about it. The meniscus is the cartilage pad in the joint of the knee.

The publisher said a meniscus tear is common in writers.

Maybe we sit too long at a computer, abruptly stand, and whamo, a crunch. I don’t know what causes that cartilage to slip from its joint, sometimes it’s an athletic injury, sometimes age, sometimes arthritis, maybe a lightning bolt from the sky.

Another vendor said to give them a magic act—I don’t remember what they would pay in return. (I'm sure it wasn't a publishing contract.)

As I walked the aisles of AWP where writers displayed their books, publishers advertised themselves, one thing surprised me—that Universities were promoting their journals and their MFA programs. (Masters of Fine Arts in Writing.)

MFA’s were another thing I didn’t know about until recently when I read an article titled, “Will an MFA get you published?’

That rather colored my decision not to stay for the keynote address that night, as it was sponsored by the Oregon State University’s MFA in Creative Writing.

The speaker might have been wonderful. But I’m sure he wasn’t a Bill Clinton.

You see I attended such a Book Fair the year Bill Clinton’s book, My Life, came out. And that masterful speaker gave the keynote address. He spoke about writing his book, and was motivational. I remember him saying that his publisher admonished him, “Bill, you don’t have to mention every person you have ever met in your book.”

Okay, back to the AWP floor:

I walked along dousing the people and the vendors. You know what I mean by dousing, you are attracted to this one, that one, to certain people, not so much with others. I was drawn to a live-wire beautiful young woman promoting her book, To Black Parents Visiting Earth.

I so believed in (author) Janet Stickmon’s, premise, “If black parents from outer space visited earth what advice would she give them?” I bought her book on the spot.

When my legs felt like rubber from all the walking I sat and began to read her book.  When I read this, “To Black parents planning to visit Earth, it is not safe for you to come here. Now now.” My heart sank, I wanted to go back, find her booth, hug her and ask if she felt safe.”

Alas, I missed my chance, so I will write to her, and write a good review on Amazon.

I have said, that if I were Black I would be afraid to walk down the street by myself, and here was a woman affirming my fears.

She told the story of her husband seeing a little black boy about twelve get his face slammed to the ground when his skateboard slipped from beneath him and hit the rear passenger tire of a police car. Her husband went over to the officers attempting to explain that it was an accident. One officer asked, if he, “wanted some,” and unbuttoned the holster to his pistol. Luckily two more officers approached, and one knew her husband. All ended well for her husband and the boy.

Except that night, she, her husband, and little daughter stood in their home holding each other and crying thankful that Daddy was still alive.
I want to quote her for she is an astounding woman.

“I want Baby girl—my firecracker, my spark plug” wrote Stickmon, “to continue being the compassionate, talkative ,quick-witted, feisty, funny, smart child that she’s always been. Thought we’re not experts. I think my husband and I are doing a great job making this happen, especially considering all we’ve exposed her to, all the conversations we’ve had, and all the laughs we’ve shared.

“But I must admit that I’m tired.  Molding counterhegemonic armour for a 6-year-old child, making sure it is small and light enough for her to wear, is some kind of sick, warped task Black parents perform daily without exploding. Meanwhile, the white world remains clueless about how our time is spent. There are many hours in my day when I resent the burden of this task. But I will continue to do it for my daughter’s protection, especially if it means my work will preserve her silly laugh and bright eyes.”

And then OMG I was hit again with her fears. She explained that with the Obama administration she felt that great strides had been taken, and she enumerates them, but when Trump was elected she felt betrayed like a slap in the face.

But more than she feared Trump, she feared his supporters. People that had been hating silently were now given permission to hate publicly.

She wondered why her tax dollars should go to a country that allows a sexist, Islamophobic, KKK-endorsed raciest, one who wants to build a wall between the US and Mexico to stop illegal immigration, who thinks climate change is a hoax made up by the Chinese, to become president of the United States.