I was going to hit the first line of this post on 2:58 P.M the exact time of the equinox here in Eugene, Oregon.  And the exact time that the sun’s rays will land on the equator. However, I was distracted by a phone call, and now that moment is past. 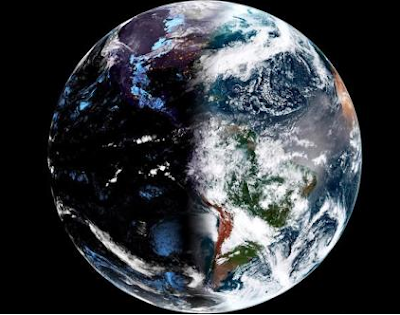 Well, I’ll notice what time the sun sets tonight, I hear it will be exactly (or nearly) 12 hours after it got up this morning. Today we will have equal light and dark, don’t know how that will affect us. Maybe it will help our serotonin/melatonin balance, or screw it up. I don‘t know which.

The chickens were affected by the length of daylight and began laying even before the great snow of the winter hit. So they are more in tune to the light that the temperature.  And now the daffodils are dressed in their spring yellow. And the purple crocuses that thought spring was here about a month ago, found that they had jumped the gun and ended up under eight inches of snow. They bounced back and are giving it a second go.

It’s my favorite time of the year. The flowers burst out, the silky leaves on the trees push themselves out of those winter sticks.

How do they do that?

And wonder of wonders, the peacock is back. He had been missing all winter. I was worried that something had happened to him. You know my peacock story—how one has appeared at three different houses before we moved into them. And a peacock in Junction City?  I would never have thought it. 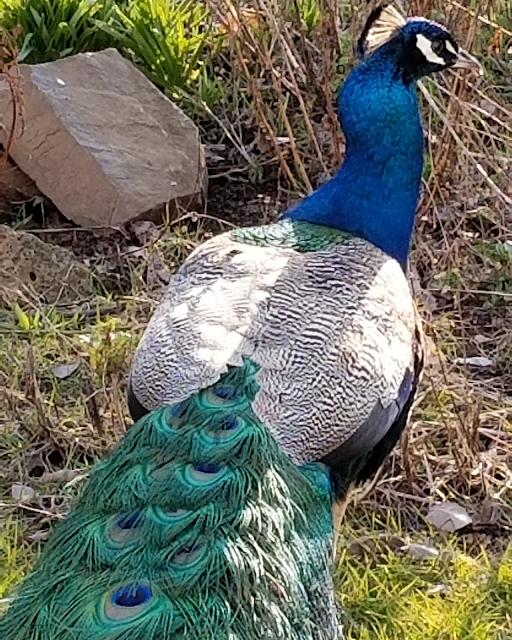 It makes me wonder about power animals.  Long ago, in a guided meditation, the peacock came to me as a totem animal. And when he—always a male—started showing up at soon-to-be-moved-in houses, (Riverside California, Marcola, Oregon, and Junction City, Oregon). it really made me wonder about the nature of reality.


“There are more things in heaven and earth, Horatio, than are dreamt of in your philosophy.”

I didn’t intend to write about chickens and peacocks. However, my fingers took on a life of their own, and I had to tell you about our little farm.

It’s only one-third of an acre, but I have mentioned that we have four chickens, and one, Chick-a-Dee, the Margaretta drinking hen, has been free range for the past year since she lost her sister and became a pet. I finally made the choice, “Who do I please, her or me?”

Video of chick-a-Dee drinking a strawberry Margaretta,  photo taken by my daughter.

Chick-a-Dee is now off the back porch and into the chicken yard. My husband and I made a tube run connecting the two yards, so if there is any argument they can go to neutral corners.

And I have a clean back porch.

This morning, sitting in my car, drinking my latte’ before running errands, I began reading (again), The WAR of ART, Break Through the Blocks and Win Your Inner Creative Battles, by Steven Pressfield.  Read that book. That man is a genius.

It doesn’t matter if you are involved in some creative endeavor—but I suspect you either are or wish you were, for creativity abounds in people. And you’re a people.
Pressfield labels the enemy of creativity Resistance.

“Resistance is faster than a speeding bullet, more powerful than a locomotive, harder to kick than crack cocaine.” And we’re not alone in this resistance, many a fine fellow has bitten the dust.

Pressfield takes the audacious approach to ask: “How many of us have become addicts, drunks, developed tumors, and neurosis, succumbed to painkillers, gossip and compulsive cell-phone used, simply because we don’t do the thing that our hearts, our inner genius is calling us to?”

His belief is such that if suddenly we all took the step to pursue our dreams, every shrink would be out of business, prisons would be empty, alcohol and tobacco industries would collapse, junk food would be not more, as well as cosmetic surgery, infotainment business, pharmaceutical companies, domestic abuse, and dandruff.

Resistance hits us if we begin a new entrepreneurial business, start a new diet, a new spiritual practice, an exercise regime, the decision to get married, acquire more education, rid ourselves of some unworthy pattern, or to take a stand for something we believe in--to name but a few.

Resistance acts with the indifference of rain.

Master the fear and we conquer Resistance.

Wow, I have to get busy. I have been resisting collecting data for our taxes.

Plunge in, I’ll see you on the other side.