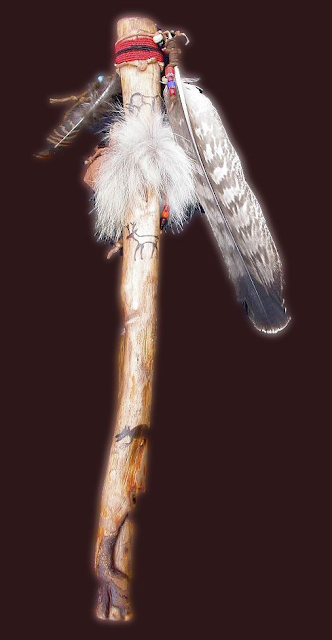 In a little while, it will go to someone else--maybe you.

In the warmth of the campfire, we can tell our secrets. We can share our dreams.

There while holding the stick, we cannot be argued with, interrupted, or ridiculed.

The talking stick gives us time, and a platform to say our piece.

Others may disagree with our statements, that’s okay, they will have their turn.

After a while we see each other for who we are—we are The Wisdom Seekers.

You know that the talking stick is a Native American practice. It’s a physical item, a decorated stick that gives the one holding it the right to talk.

The others do not interrupt, make snide comments, or argue. After the first speaker is complete the stick passes to the next person who wishes to use it.

I saw the stick lying on the floor this morning vibrating as though it had been attached to an electrical wire.

Yet, as I, with a quivering hand, picked up the stick I wondered if I would be thrown out of the group. I feared ridicule and laughter. You don’t know what you’re talking about some might say. You’re crazy, says another.
Wait, you will have your turn.

I know I’m not crazy. I know that there is a truth buried deep within me from old times, from ancient cultures, from present teachers, and from my own experience.

It is our duty to share what we have gained from the privilege of living on this beautiful planet.  (I am in awe. If you don’t value this planet watch “This Strange Rock,” on Netflix, and see how our earth is fighting for us daily.)

We have a duty to teach what we know and to counter the negative bias that permeates all of us as human beings.

You know how anything negative sticks like Velcro to Velcro.

We can have one hundred positive comments aimed at us, but let one negative slip in and what sticks?

The world preys on negativity daily. It feeds us with danger, with stories of war or rumors of more war, murder, someone falling or getting trapped, animal harmed, the atmosphere in danger, the ozone leaving, asteroids crashing into us, and the sun swallowing us up.

It’s enough to make a stalwart soul quiver in the closet.

But, we’re made of stronger stuff.

We know that for the 600,000 years of evolution that built negative bias into us, it helped us to survive. It kept us away from Saber-toothed tigers, for if we didn’t jump from danger, or learn what it was, or what its habits were, we weren’t there the following day.

We can’t do anything about the past. We can, right now, be advocates for our own happiness. We have a big thinking brain, we can learn and grow from RIGHT NOW.

When Marie Forleo asked Rick Hanson what the difference between the BRAIN and the MIND was, he said the brain is the hardware. The Mind is the nervous system that took those 600,000 years to evolve. It processes information.  For example, the brain sees the traffic light, the red, yellow, and green. The mind interprets them.

We can use our mind to actually change our brain, for thought patterns leave behind lasting traces. “Neurons that fire together, wire together,” says Hanson,

“Pat the lizard, feed the mouse, and hug the monkey,”
says Hanson.

The lizard is the Reptilian Brain, you’ve heard of that one. It is our primitive brain whose purpose is to see that we survive. (Fight, run, freeze.)
The mouse is the mammalian brain. It is called the limbic system and is the center of emotion and learning.

The amygdala in the mammalian brain is the filtering system—the security checkpoint of airports. It scans for threats or danger, then it authorizes admittance into the higher brain, the neocortex.

The amygdala has no concept of time. Past, present, and futures are all one and the same.

That explains how traumatized individuals are stuck in the past. For them, their trauma is happening right now. And the amygdala was never designed to store long-term, but it does.

Hanson’s instructor said, to go ahead and repeat your bad experiences as long as you want. But 10 times is enough.

Sometimes the amygdala is called, the joyful amygdala for it has a wonderful characteristic.

You can train your amygdala away from trauma. The more you know yourself, the more resilient you are.

The more resilient you are, the happier you are.

Find an opportunity to be happy. Stay with it. Feel the emotion. Allow it to penetrate your entire being.  Remember, “Neurons that fire together wire together.” Too often we let the good slip past us, that compliment where we say, “Oh, that old thing.”

Stop, allow it to settle, allow those neurons to wire.

Find an opportunity to be joyful.

The monkey represents the primate, the higher brain, the neocortex. The monkey focuses on relationships. It is our need for social connections. Hanson says that LOVE is the multivitamin.

We as humans are good at having experiences, so position yourself to go for the better.

“Learning is the superpower of superpowers.”
—Rick Hanson