I see you here.

Here are some extra white horses for you to wish upon. 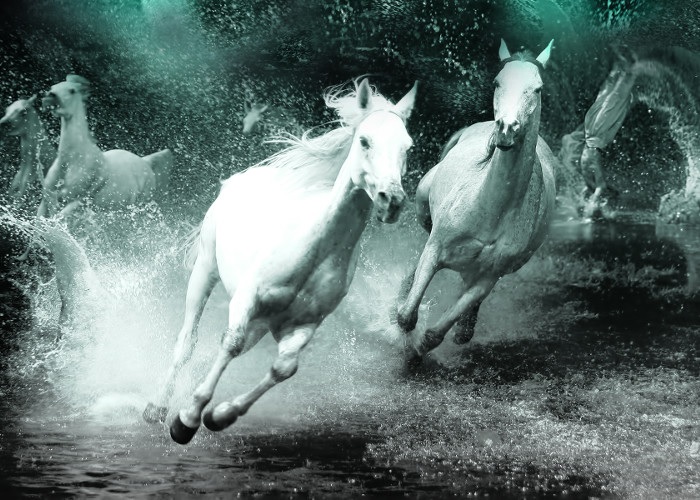 I’m going to savor knowing you were here for 20 seconds.

I’ve heard that letting a positive experience settle for 20 seconds changes the brain to be more receptive to good.

We often brush away a compliment, saying “Thank you,” and it slides off.
Three seconds—it’s gone.

Have you noticed how we remember the bad stuff, but forget the good?
I can hear you, "Oh, I remember the good stuff.”

Of course, you do, especially those moments wrought with emotion.

It’s the way our brain works.

Sitting in a Vet's office one day an elderly man asked me if I would like to see his cats.

He showed me a picture of two dead cats.

I almost fell off my chair.

He had no malice.  He genuinely needed to show me. I could see he loved those cats. Those emotionally packed hurts were emblazoned in his brain.

And what is negativity bias anyway?

Dwelling on negativity is a function of the brain.

Our beautiful brain is hardwired to put more weight on the negatives. As we evolved and faced danger, our hair-trigger reaction was to scream, “Tiger,” and run.

If we survived the event, we needed to remember it so we would never be in that situation again.  And we needed to go home and tell our fellows about it.

“The brain is like Velcro for the negative, Teflon for the positive.”

The problem is that those negative experiences—here in our “modern” age it is not usually from tigers, but from financial worries, relationship problems, work-related issues, early abuse, you get the picture.

All that can create a bottle-neck in the brain.

When our cells are stressed, a brain chemical called cortisol pours into our cells. And cells tend to replicate what they just got.

Our body gets used to the cortisol, our cells thrive on it, and want more.  The trouble is continual doses of cortisol wear down the body, leaving it prone to disease and pain.

When we try to put aside old patterns of negativity, it makes our cells feel ill, and they want to go back to the old way.

Here come the stories, such as: “I’m stuck, I can’t do it, I’m not built like that,” “I don’t have the capabilities,” but remember,

Just as you are about ready to give up, a shift happens.

A Wow brain tends to look at life as an exciting, adventurous experience instead of a dangerous one.

Dr. Hanson said he was a geeky kid and not well liked, but when he got to college, he made a discovery. Positive experiences create more positive experiences. If he held onto that encouragement, that compliment, that smile, wink, whatever, he began to feel better.

Thus he promotes the 20-second rule—savor that positive experience for 20 seconds and see what happens.

I noticed, however, as I was doing his process of thinking of a happy event—I choose the day I got my horse—you know I am cuckoo over horses—well at least a couple in my life. As I tried to hold my happy thought about getting Boots, thoughts crept in of the day I lost him.

That was Negativity bias.

Name it and let it go.

Not an easy task.


Over ten years ago daughter dear and I attended The Calvalia horse extravaganza in Dallas Texas. I had to think of it when I came upon those racing white Calvalia horses in the first picture on this page. And being in Texas I had to buy a pair of cowboy boots. (Snake skin.) We had to have a steak too, (Not snake, beef.) and I have to admit, their beef steaks held the prize until years later they were beat by a Santa Fe New Mexico's bone-in ribeye.

The Texas policy of serving a steak is to give it its own plate, nothing else. Sides come, well, on the side in their own dishes.

The event we went to see, Calvalia, has many horses, yet their white ones are the showiest. I’ve seen trick riders before, but the girl that let out a “Whoop!” and came barreling into the arena (on a chestnut colored horse) like a bat out of hell, riding roman style, one foot on one horse one foot on another set the bar.

With my experience with horses, I learned that they, like people, are extremely susceptible to cortisol. And scientific journals have noted that a continual bathing of cortisol will actually shrink their brain.

See, I did have a point talking about horses. For they have similarities with people. 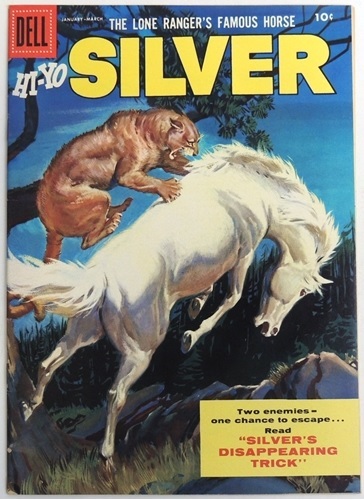 Since horses are large animals, they are thought to be tough. They are athletes, strong, yet delicate. Their skin is seven times more sensitive than ours, and their legs—being their primary means of escape, are tendons and bone, not muscle from the knee down. Horses are sensitive to signals that our human eye can barely catch. I discovered, too, that when riding a horse, it will go toward your focus. Let’s say you keep your eyes glued on a fence post. Your horse will go straight to it.

Is it any wonder that I often compare gentling the horse to raising humans?

And you can see too, that I might think that wishing on them is magical. 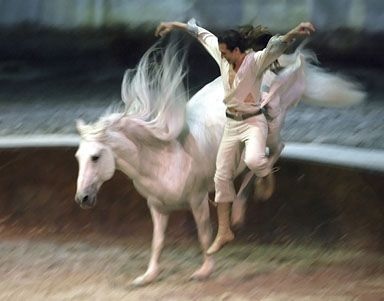 A Buddhist saying:
Do not think lightly of good—saying it will not come to me.
Drop by drop does the water pot fill.
Likewise, the wise one gathering little by little fills themselves with good.

Be happy. Think good thoughts. I love you,
Joyce
Posted by Joyce at 12:14 PM