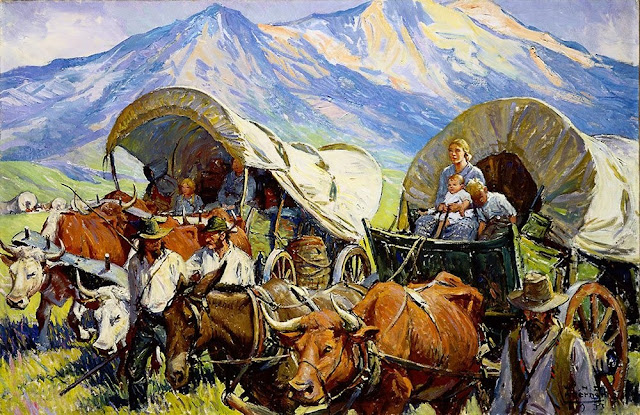 The wagon trail was far behind me when I saw ahead, a fort. A fort? Here on the prairie?

I figured the captain would know all the forts along the trail, but I hadn't heard about this one.

Well, I was the Scout, wasn’t I? It was up to me to investigate. It would give me a feel about the people living here. Was it a military post, or a protectorate for the settlers? Perhaps it was a trading post, but not likely a fur trading post, out here on the prairie. Perhaps a supply post. Or it could be for American and Indian negotiations.

Soldiers and families rushed out to see who was riding into their midst, and I was welcomed. However, a shock-wave descended over the group when they saw that I was female. I heard murmurings from the people who had gathered.  “A female scout?” A woman riding astride? “Who does she think she is?

On man made a lewd remark that made me feel slimed.

One friendly young soldier took my horse into the stable saying he would feed and water it.

I was new to the group, and an oddity, and soon some of the people warmed to me, especially the girls. But within the group, I heard rumors and innuendoes and downright prejudices about people that were not to their liking. I was an American settler, that was okay, however, they were hostile to the red man, thinking he ought to be removed from “Their” land.

I thought of my little four-year-old Apache brother my momma adopted when his parents were killed.  I pray he never hears this.

The people in the fort didn’t trust the influx of people coming across the border either. They felt entitled to this land and the “foreigners” ought to stay out.

The cattle ranchers didn’t like the sheepherders for the sheep nibbled the grass too short for the cattle to wrap their tongues around.

Most of the ranchers didn’t like the wild horses which they believed were taking valuable fodder away for their domestic animals.

The people cut the trees and trapped the wild things for food and profit without thanking the Great Spirit for providing sustenance for them. Someone even suggested that the United States ought to build a WALL between our country and the one next to it.

I couldn’t believe it. I wanted out of there.

During a moment of calm, I slipped away, ran to the stable, mounted my horse and beat-hoof out of there, hoping nobody followed me.

I was once again in the open air galloping across a prairie so vast that I believed it would provide for all the peoples who braved coming here.

But I wondered, should I tell those courageous souls in the wagons, those hopeful souls that believe a new life lies ahead, about the fort?
Those wagoners will endure days in the blistering sun. They will ford rivers, and fix broken wagons, and search for good grass and water for their oxen and horses because without food, those animals, they so depend upon, will not survive.

They believe that making their milk cow walk the distance with them is worth its struggle, for it will provide nourishment for their children. But getting enough food into the animal is a day to day battle.

I decided to divert the wagon train and miss the fort altogether.

There was nothing there for them.

Food:  The pioneers created recipes to cook over a campfire. Baking bread was a daily activity.

Bacon was the second most popular food item on the trail. The most common meat was probably squirrel. There was the milk cow that some families took with them. Some engineering woman invented Coffee cake on the trail, made mostly with dried fruit.

Clothes: Clothes had to last. The clothing the pioneers bought with them was all they had to wear unless they could buy or trade for clothes along the trail.