It took both hands to do it.

Not for this post, but for my manuscript, The Frog’s Song.

Holy Cow, I just heard a God-awful sound coming from the backyard.
It’s the peacock!
I hope his visit is a good omen.

My Frog’s Song editor suggested that I place the Leaving Hawaii Chapter (aka, “Screw It!”) nearer the end of the story. I had it in the middle. In Titanic, the ship hits the iceberg smack-dab in the middle of the movie. (Open a novel, and you’ll find something significant happening right in the middle.)

But here in The Frog’s Song we are going to build up to the leave.  So I’ve been doing the Froggie Shuffle—that is shuffling chapters while taking care that I didn’t say we were gone before we were. 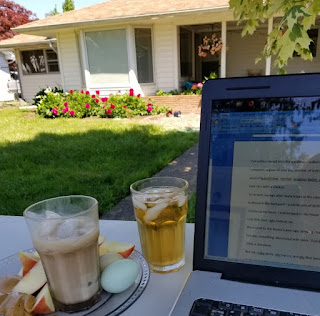 Editing in the Yard 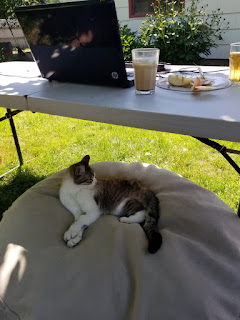 Earlier in the day, to stretch my legs after many hours at the computer, I took a clumsy jog down the walkway in our backyard—a whole sum of 30 feet. As I turned around, there was a chicken at my heels. I trotted back to the house with Chick-a-dee waddling her cute little fluffy butt right behind me.

We moved to this house a year ago, bringing Chick-a-dee and her sister with us, but alas, something absconded with sister. That left Chick-a-dee alone.

But not really alone. She has us, and she wants to be with us as much as possible. She sleeps on the back porch right outside our bedroom window, and she knows that Lafayette, my daughter’s dog, can push open the back door if I don’t lock it. Thus she is right on his heels and sneaks into the house if given half a chance.

The other day I found her in the front yard, happily pecking at a snail. After a peck she would wipe her mouth on the grass.—I guess eating snails is a sticky business.

On Sunday when daughter and grandson visited, Chick-a-dee stole a drink from my virgin strawberry Margaretta –that was before any snail slime had passed her lips. 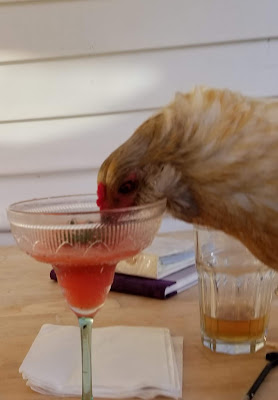 Before this experience with Chick-a-dee, I had no idea that chickens could be so social. Our other three hens, penned in the chicken yard coop, squawk and run if I so much as drop a bucket. And catching them? Forget it.

We don’t really live on a farm, only one-third of an acre on the outskirts of town, but here I can legally have chickens. (I had Chick-a-dee and her sister illegally at our other house.) In Eugene, you can have chickens, but here in our little town, anything considered livestock is verboten. (Delusions of grandeur.)

You know what being out of the city limits means?

And here people walk a lot, esp. with their dogs, and we all walk down the middle of the street—much to Lafayette’s hound-dog announcing delight, but not to our ears.

After my rant in the last blog about being inadequate to write Brunch for the Soul, I’m doing it. I include it as one subject in http://www.plottwist747.com.

My daughter says I should write a blog where no one I know reads it, that way I wouldn’t censor myself, but I don’t think I am, so it doesn’t matter. If you censor yourself, because of what others might think, you aren’t worth a rip as a writer.

My care for the soul advice today is: avoid negativity—your’s, mine, the world's.  It isn’t possible all the time, and if it isn't, know that it does not belong on you. If you can raised your energy level, do it. Another option is to say, “I’m sorry for your pain,” and leave.

“It’s not my monkey, not my circus.”
The best advice I heard this week.

Well, without planning to do it, I covered three subjects out of the four I intend to cover in Plot Twist—#Brunch for the Soul, (#Travel, nope, except that's what The Frog's Song is all about.)  #Life on the Farm, and #Writing.
Posted by Jo at 12:54 PM