The Dog and The Chicken


This morning I watched as Lafayette, my daughter’s Coon Hound, took a piece of an enormous dog biscuit into the yard. He dug a hole with his paws, put the biscuit into the hole, then with his nose as a shovel, he covered it.

Blonde, my free-range chicken, watched this procedure up close, like about three-inches away. She pecked at the dirt as he dug. “Ah ha, someone else who likes to dig.”

When Lafayette ran to another side of the yard to look out the gate, the hen,  her little behind bouncing along with her jogging, trotted right after him.

Now, this dog had once killed one of my chickens. I don’t think he meant to kill it, but being roughhoused was too much for the poor hen, and there was Lafayette, proud as could be, carrying a dead chicken into the house.

What do you do with a dog that kills chickens? My dad would shoot it.

I once had a dog that would catch a chicken that had escaped the yard, hold it with his paws, lick its face until we saved it from its tongue slurping, and put it back into the pen.

I couldn’t have a dog on the premises that killed chickens.

So I looked online (everything is online) and a little boy who had the same problem as me, told his solution. His problem was worse, his parents were going to get rid of the dog. He couldn’t let that happen. The dog had to learn, and although it broke his heart to do it, he picked up a switch and every time the dog even looked at that chicken he gave it a whack on the rump. Now, he said, the dog can be inside the chicken yard and doesn’t bother the chickens.

Okay, now don’t tell my daughter. She is so opposed to striking anything that she would kill me, but I got the pancake turner, and with the other chicken lose in the backyard, (I only had two) and Lafayette also loose in the yard, whenever he even looked at that hen, I gave his rump a resounding whack with the pancake turner. Daughter usually doesn’t read my blog,  so maybe I am safe, and I’m trusting you to keep quiet. 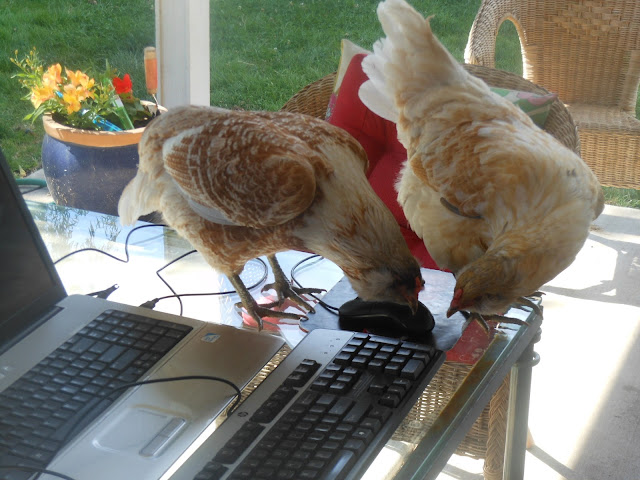 This morning as I watched the scene, I thought about how many people treat farm animals unemotionally, a cow standing in the field, chickens, whatever. And they must feel the same about us. But when we begin interacting with them,  their personality blossoms. Blonde wants to be with us. She does not care to join the three other hens that are cage bound. If the back door is open, she will come in.

I must handle her porch sitting, however.