Suddenly outside our restaurant window, a great throng of people streamed past. Droves of people marched down the middle of the street, children, dogs, moms, dads, grandparents, people in wheelchairs, more came and more. Many held placards.

It was a #protest march against #school shootings.

However, school shootings isn’t a gun problem. It’s a psychiatric one.

Stiffer gun control, arming teachers, blaming the NRA, the government, that seemed to be the focus, and I questioned it. But then, if there are no guns no one would be killed or injured by one.

When I was growing up in our little provincial town, a boy used a metal pipe to kill a little girl camping out in her own yard. It isn’t all about guns. It’s demented people. He wanted to see a naked girl.

Studies have shown that a majority of school shooters are either on drugs or are withdrawing from them.

Yet, I didn’t see any placards protesting the use of drugs to medicate children.

Shooters have often been abused at home and at school. Shooters often don’t get with the school’s program, or fit into the schoolyard. The cafeteria is probably a horror. If a student is so crazed that he wants to shoot up the school and the people in it, something is seriously broken.

It the shooter is an adult it is an act of terrorism. (That’s broken too.)

Once a person feels helpless, anger and resentment build, they are hurt and want to hurt others. Probably if that boy who became a shooter had asked the girl he just shot in the head for a date, she would have put her heel in his shoe. But then since the deranged kid already felt he was a loser, he wouldn’t ask.

By the time a shooter has decided to do the deed, they are willing to lose their own life in the process.

It is hard for someone who values their life to communicate with one who doesn’t value theirs.

Yet, we want out children safe. We do not tolerate violence.

We know that mental distress can cause mental illness, continual stimulation of cortisol, and all that brain chemistry I don’t know about can totally screw up a person.

And then there is body chemistry, chemical imbalance, inadequate diet and a constant influx of adrenaline that can instigate thrill, fight or flight—the issue is complex.

End result: We have a person society proclaims to be mentally ill.

Instead of arming the teachers with guns, what about arming them with knowledge. Teach them to notice and care about the child who is sullen, angry, lacking in motivation, getting poor grades and doesn’t care. In the past we shamed them, sent them to the principals' office, or expelled them from school.

In my grade school, there was a boy that if something was out of whack in the classroom, the teacher blamed him, and she was usually right. A man teacher in our fifty grade spanked him in front of the class on a regular basis. I feared that he would end up in jail, but I have seen him at my high school reunion, and he is cool. A nice guy.

This kid and I were once neighbors, and he called me on the phone before our high school reunion encouraging (begging) me to come. Without that call, I probably wouldn’t have gone, and I wouldn’t have found out how cool he had become.

Maybe we had more resilience in those days. I don’t believe anyone entertained the idea of taking a gun to school. Golly, we got busted for chewing gum.

I know that now the teachers would label my friend as hyperactive. He was a skinny little kid with lots of energy.

I’m happy they didn’t ruin him. I do believe that he had an outrageous sense of humor—perhaps that saved him.

Educators and society love the students who excel in their studies.  They get all A’s; they are popular, but what about the ones labeled as Hyperactive, Attention deficient, or Bullies?

If you think tough kids don’t want love, ask why they join gangs.

I know, getting to a sullen, depressed, rude, or quiet child takes Herculean effort. It’s easier to drug them.

My Grandson can deliver a dissertation while circling the room—some children learn better while moving, especially boys.

Yes, I know its complex, and some might say that there will always be crazies, but what if we weren’t so anxious to medicate a Hyperactive child, an attention deficit child, a loner, a misfit, or a bully?

My take on schools is that students can learn the essentials on reading writing arithmetic, oh yes, biology, physics music and art, all that, in a couple of hours a day. Perhaps a better use of their time would be learning how to be a human being, but then, that is a skill few of us understand.

After my rant on the psychological aspects of gun shootings, I looked online and found that gun control in other countries does reduce gun deaths. And you know that in Britain, even the policemen do not carry guns.

Gun-related deaths drop in all Europen countries who have implemented gun control. Guns are virtually absent in Japan.

In Germany it's different, there are more guns in households, and the lowest percentage of gun-related deaths.

A German person must undergo psychological testing to own a gun.

To the student who commented that at least she felt that people cared.


Here on this blog, I have struggled with wanting this page to be a positive place to sit. I want it to be motivational. I want people to go for their dream and to believe that it is possible to obtain that dream. Yet, at other times something impacts me like that demonstration outside my window that I didn’t even know Eugene Oregon had planned.

Sometimes we just have to stand up.

Whoops, I stood up and the cat fell off my lap.

P.S. In Jakob the Liar, a 1999 movie, Robin Williams (Jakob) instills hope in a tiny Polish village by saying (lying) about a hidden radio that gives news that the German war is faltering. While the “Authorities,” aka Nazis, have guns, Jacob does not. It appears that if he had had a gun, he might have survived.


And probably one reason Americans are so adamant about holding onto their guns.

No child should ever have to ask this question: 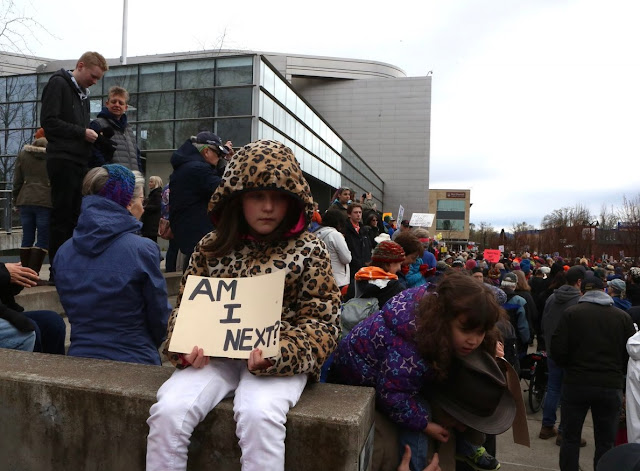