What Are The Chances?

When you live about 40 miles south of the path of the Solar Eclipse’s Totality, it makes sense to drive a little north.

And so, that’s what we did.

On Saturday husband and I scouted parking places for the upcoming event on Monday. $100.00 parking places? Nope. Crowds of 10,000, no again.

We found numerous places close by the Corvallis Municipal Airport, and in the path of almost 2 minutes of totality.

On Monday as we were in route up highway 99—it was between 8 and 9 in the morning and not crowded-- my daughter, son-in-law and grandson ahead of us called to say they found a place within close range of the airport, a beautiful spot by trees, on grass, and with shade. Perfect--except for one thing.

It was on private land.

The owner gave permission though, and it was there we met our family all prepared with an ice chest of food. Other people, to the owner's dismay, joined us, and all were respectful and left not a scrap.

Below is a picture of the sun through a hole in a paper place projected on a white board. This is the concept of a pin-hole camera. 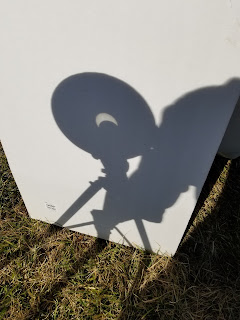 The pilot of a light plane, his trail like chalk on a board, outlined the sun. 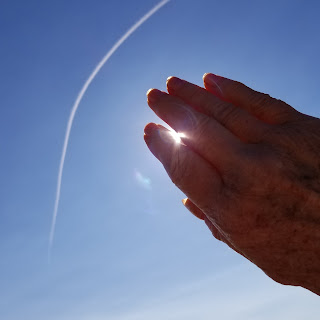 Husband dear was intrigued at finding a Mylar balloon floating high above our heads, and apparently three vultures did too, for three were circling.

My naked eye couldn’t see the balloon, guess his vision is better. I could see the vultures though, I wonder if they thought they were coming to a barbeque.

The dark moon—invisible to us until it began its sojourn across the sun’s face began as a bite, a crescent, a half, a three-quarters. 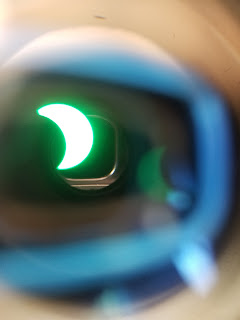 Husband dear set up a small telescope and this is a picture taken with my phone/camera peeking through the lens.

The dogs didn’t want anything to do with this event, and hid out in the vehicles. I wish they could tell us what they were seeing or feeling. 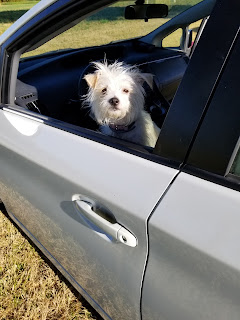 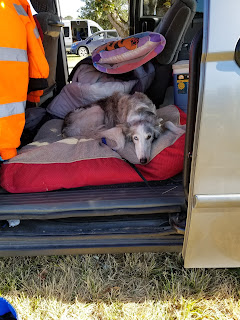 I, too, felt off-kilter, a bit dizzy, but I thought perhaps it was because I was looking up so much. Don’t know. Sometimes we doubt our feelings. One reason people have so few other-worldly experiences.

Eerie dim-darkness enveloped the countryside.We watched as the moon crept across the face of Ra, and then El Whamo.

We ripped off our glasses. And there it was, the corona. 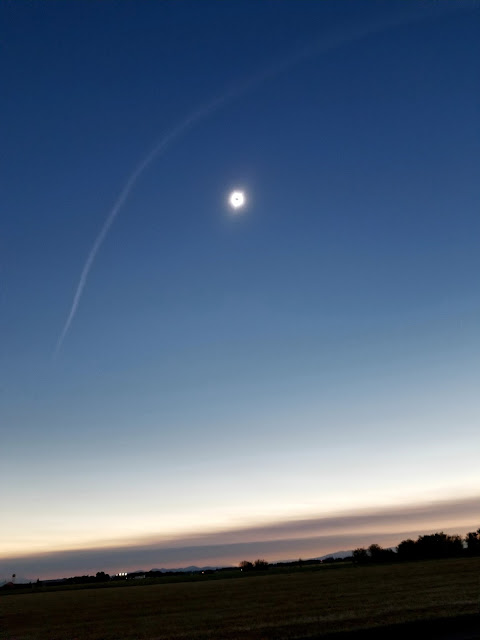 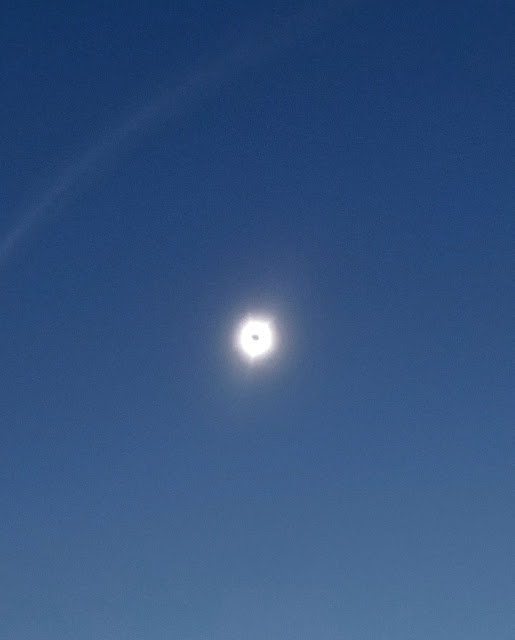 The temperature dropped 20 degrees. It was unsettling to feel how vulnerable we are, drop a shade over the sun, and the result is immediate—darkness and cold.  A star, thinking it was night, blinked. Whoops it wasn’t night. A minute and 50 some seconds later a crescent of Ra appeared. Put on glasses!

We toasted good old Ra’s  return with a glass of champagne.

Later on that day at a garden shop, I read “Our sun is the only one known to grow vegetables.”

In the town of Corvallis a woman came up to us and asked how the dogs fared. She and her family drove up from Oakland California. She said it was probably her only opportunity to witness such an event. Her husband said maybe it would make him a better man, but he wasn’t noticing that happening. I said it was accumulative, and would happen over time.

I feel that the eclipse was a pause for the earth. Maybe we gave her a breather.  Just think, mother earth had a moment to collect her wits while some estimated 7 million people stopped whatever racket they were doing, driving, yammering, computer punching, and looked up.

What are the chances of seeing a total eclipse?

This was the first total eclipse to occur completely bisecting the U.S. since our founding fathers declared us a country.

The moon’s orbit takes it directly in between the earth and the sun every 18 months or so, however, this one was unique for it darkened populated areas, and not in the middle of the ocean or a desert or some ice encrusted continent.

What are the chances that from our perspective the sun and the moon are exactly the same size?

Eventually total eclipses will be no more, for the moon is moving away from us at the rate of 1 ½ inches per year. Rats. I don't like that idea. The last total eclipse will be about 620 million years from now.

The corona, the gas jacket around the sun, is millions of degrees hotter than the surface of the sun, which is about 10,000 degrees Fahrenheit.

Scientists don't fully understand why. One explanation offered by NASA  is that the gas collects “heat bombs” that fly off the sun into that gaseous layer where they explode giving off heat.  The corona extends far into space, and affects solar winds. Eclipses give scientists an opportunity to see, and thus to study, the corona.
Posted by Jo at 2:54 PM