First a trip through the garden…

And the sunflower that came up, planted by some unknown critter. 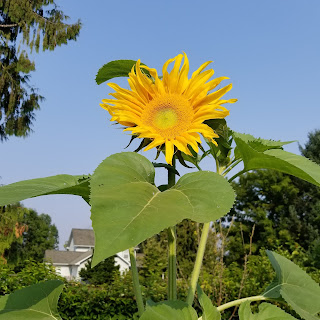 Green tomatoes among the marigolds, planted by a known critter.  Weeding, well, that's another story. 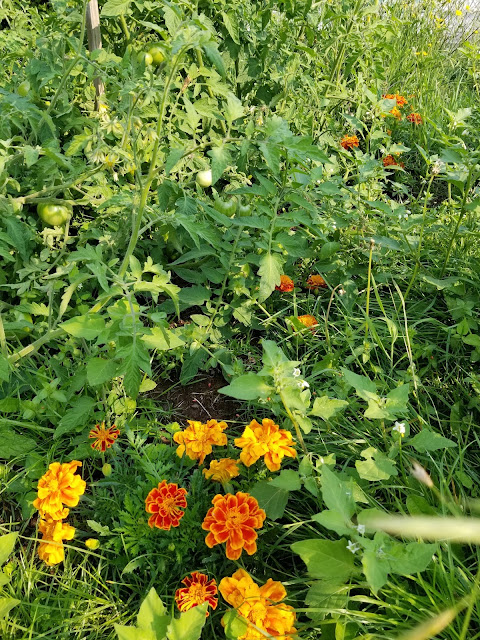 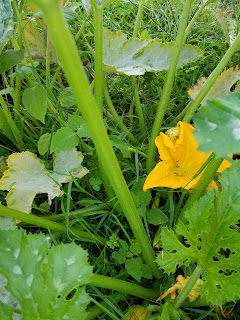 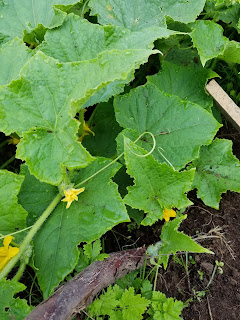 The egg-a-day ladies of the farm. 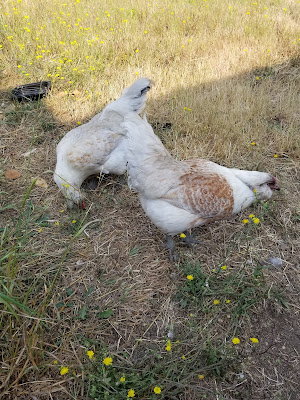 And the temptation of the meal worm bag. 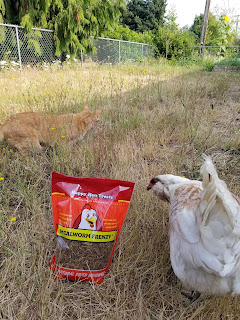 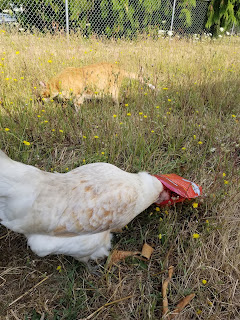 Ah ha! I did it. El Yumo--and now I figure all red bags ought to contain meal worms.

Then a hop into a #hyperbaric chamber to get pumped up with Oxygen.

I was a tad bit apprehensive about being enclosed in a cylinder for an hour, but decided to do it anyway.

Long ago I participated in a consciousness raising process where I crawled through tubes large enough for two people to squeeze through with each going opposite directions.

That wouldn’t have been so bad except that there were a few hundred people participating in that process, and more than there ought to be in the tubes.

If someone in front of you didn’t move you could either wait or crawl past them, that is if one or two of you didn’t have too much body fat. (There was a goal, of course, but first you had to get through the tubes.)

I learned a lot about crowds in that experience though, that people are mushable. You can slip past them in tight spaces. However, in the tubes if there was someone in front of you, someone behind, and if there was someone trying squeeze past you from the other direction, well, let’s say the trapped panic I felt I never want to experience again.

So you can see that I might be somewhat apprehensive about entering another tube.

Except, this tube was a cylinder. It was roomy. I was alone, and it was like being in a quiet comfortable pup tent.

I laid on a memory foam mattress, had a pillow beneath my head, wedges under my knees and a blanket over my body.

I breathed pure oxygen through a nasal cannula, had a window beside my head, a call button, and someone outside looking out for me.

The cylinder was a hyperbaric chamber in which you crawl into, they zip you up, and pressurize the cylinder. At first you feel as though you have gone to the deep end of a swimming pool.  You clear your ears, then it is smooth sailing into bliss for a comfortable hour.

Later when the pressure returns to normal, your ears crackle like popcorn on a hot stove, you return to normal, and it’s over. Easy.

Drink 64 Ounces of water said the attendant for you would be detoxing.

I scheduled another appointment, it’s good to do a follow-up, they said, and I was on my way to the rest of the day.

This treatment came to my attention when my husband researched it for a friend with a traumatic head injury. Hyperbaric treatment is purported to be beneficial in head injuries as well as many other life challenges. Burns, soft tissue infections, radiation tissue damage, skin grafts-- are often covered with insurance, under a doctors prescription.

Autism, cerebral palsy, Lyme disease multiple sclerosis, near drowning, sports injuries, and  stroke, are not covered under insurance, but believed to be helped by the treatment.

You may know of a hyperbaric chamber from the use for SCUBA divers. If they ascend from the deep too fast they can  get bubbles in their blood. The chamber allows them to pressurize again, and with a slow return to sea level, their blood normalizes.

I found there are three places that house hyperbaric chambers in Eugene, two in hospitals, and one—where I went, that anyone can simply make an appointment.

Under normal circumstances, oxygen is transported throughout the body only by red blood cells. With Hyperbaric treatment, oxygen is dissolved into all the body’s fluids, the plasma, the central nervous system fluids, the lymph, and the bone. It can thus reach all of the damaged tissues and the body can then support its own healing process.

Why did I go into a hyperbaric chamber?

Well, first you don’t have to have a reason, for it is claimed to help a number of body situations, inflammation, wounds,  infection, and promote general well-being.

I was hoping it would assist my recovery, as well as well as a  thumb injury. It had become infected—I had taken an antibiotic, something I hadn’t done for more than 30 years, the infection cleared up, but I will still probably lose my nail.

I wanted to accelerate the healing process.

I drank my water, and that night I went to bed at 9:30 (that’s early) and slept like the cat that decided to crawl in beside my husband and me.

Morning found me zipping around ready  to begin another day.


P.S. www.livewild747.blogspot.com is getting more hits than wish on white horses, and I haven't advertised it. Who doesn't want to life wild? Remember the 747, though, livewild is someone else's blog. 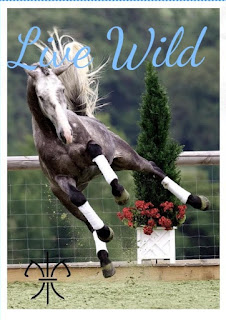