"Of all the paths you take, make some dirt."*

Wish on white horses flatlined for a few days, lost its dot com, and in the process didn't even see the light at the end of the tunnel. Now we are back fresh with a new address. It is a dot org. The address now is wishonwhitehorses.org. Remember the originator of this blog is from Oregon, org, good ending.

And so we begin;

For 63 of his 87 years, Buckminster Fuller noted for the geodesic dome, kept a scrapbook/diary that documented every day of his life. It reflected his correspondence, drawings, newspaper clipping, grocery lists and other evidence of his unique story.

This information came to my attention on my “Free Will Astrology” by Rob Brezsny—in my opinion, the best column to read in The Eugene Weekly.
.
His point to Aquarians was that he would love to see us express ourselves with as much disciplined ferocity as Buckminster Fuller did for the next two weeks of our lives.

I had to laugh, but don’t worry folks I won’t publish every detail of my existence, not that you would have to read it if I did, I just thought it was funny that he threw that challenge in my direction.

Once I heard Buckminster Fuller speak in San Diego. Of that speech I remember two things, well three, the first was the long line before getting into the auditorium where the girl in front of me who kept obsessing that we wouldn’t get in. (We did.)

Of his speech, I remember this: He held up a model of the square. It was about four inches on a side built of something like four plastic rods held together at the corners with rubber bands. Press on one corner and the square collapses. But as demonstrated next, a triangle is solid and firm. If you press on a corner and it doesn’t collapse. That concept led to his idea of building with triangles.

The only trouble is I like squares—sorry Bucky, but a cube is quite stable and makes a nice house. Probably not as strong as a pyramidal shape though. Guess those ancients knew something.

The second point I remember is that he said he made $300,000 a year and spent every penny of it. He knew that the following year he would make another $300,000—now that’s my kind of guy.

His earlier years weren’t so positive. After the death of his daughter at 4 years of age, and with family financial difficulties, Fuller contemplated suicide as a means of giving his family money from a life insurance policy.

Instead, he had an epiphany, and heard this voice:

“From now on you need never await temporal attestation to your thought. You think the truth. You do not have the right to eliminate yourself. You do not belong to you. You belong to Universe. Your significance will remain forever obscure to you, but you may assume that you are fulfilling your role if you apply yourself to converting your experiences to the highest advantage of others.” -- From Wikipedia

He ultimately chose to embark on "an experiment," to find what a single individual [could] contribute to changing the world and benefiting all humanity.”

And, as a part of that experiment, he began chronicling his own life.

The military recognized the geodesic dome as useful. It could be small, lightweight, inexpensive and can withstand heavy loads.

To quote “Bucky’: “I look for what needs to be done. After all, that’s how the Universe designs itself.”

And now a little inclusion from Joyce:

*The title is a quote by John Muir seen in a window in Sisters Oregon.

On Social media you can find many people who travel the globe as a way of life, so I thought, I don’t want to travel full-time, but what sort of day-trip can my husband and I take?

A weekend ago it was Cannon Beach Oregon, two days ago it was Sisters, a small tourist catered-to town in the high desert of Oregon. We hadn’t been there for about ten years. (Our pleasant memories of that town was the chicken and dumplings the Sisters Saloon used to serve on Sunday nights. Long ago it was a large bowl with enough to take home. Alas, that went the way of the dodo birds.)

The shortest route from here to Sisters was still closed due to snow.  Snow? It was 90 degrees that day, probably the highway clean-up hadn’t removed any brush collected on the highway over the winter,  so, we took the over-the-mountain trip.

We have always loved the McKenzie River and long ago The Log Cabin Inn was a stopping off place where they served great Marian Berry Cobbler, but the log Inn, too, is gone. I heard it burned down when we were out of Oregon. It is replaced with homes and cabins now. It is still pretty for the cabin-style structures are integrated into the old-growth forest that surrounds the area. Yes, we do have some old-growth left. The McKenzie River was so high and swift that I took Sweetpea away from the bank and beat feet out of there.

We drove through the Cascade Mountain Range where the forests were spectacular, and white frosted peaks gave evidence of long-ago volcanic eruptions.

A Douglas fir forest is sometimes so dense you wouldn't believe a deer could wiggle its way through, but animal paths snake through.

Soon the firs give way to Pine forests where you could actually ride a horse between the trees--my mouth watered-- the forest floor was green and sprouted flowers, and the trees were spaced about ten feet apart.

There was some sage brush around Sisters, but it was still in the Pine Forest. I know, however, that if you continue driving east the Pines will give way to Juniper trees and further on there will be sage brush, and no trees.

We are lucky to have that Cascade Mountain Range that creates abundant forests. It also creates a rain shadow. The land east of the range gets little rain, while we to the west get gobs, and get green that I love.

In Sisters, we ate superb Mexican Food on a little outside deck with our traveling dog, Sweetpea, under the table getting bites of chili verde. 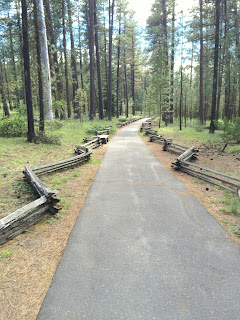 Too bad this path wasn't dirt, I would have gladly trod it, but someone threw asphalt on it. 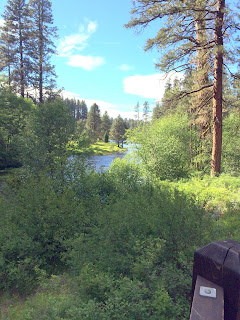 Beyond this path is a full sized river, the Metolius. It sprouts straight out of a mountainside. It was so overgrown I couldn't get a good picture of it, and I had to stay behind a fence. The water comes from springs that have been fault lifted to near the surface.  The right most picture is my view of the Metolius River from the view deck--a full-sized river only a few hundred yards from where it was born. 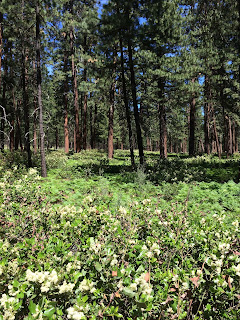 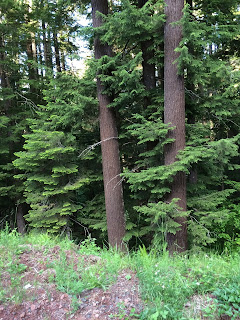 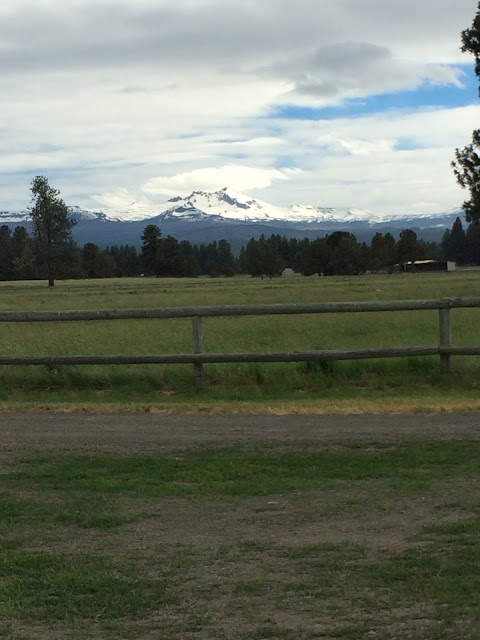 Evidence of long ago big booms.. 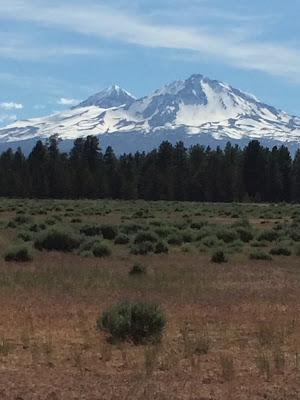 I do believe this last picture is of two of Three Sisters. If an Oregonian reads this perhaps they can identify these mountains.

There were snow capped peaks all over the place, Mt. Hood, Mt. Jefferson, Mt. Washington, The Three Sisters, Three Fingered Jack, Mt. Bachelor. Whew. In high school they told us those volcanos were dead, and then Mt. St. Helens woke up.