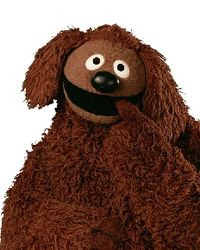 On Thursday night I turned off my cell phone in a movie theater and it took off for tall timber never to be been seen again.

On top of that my website Wish on White Horses also sucks according to one analyzer—the readership is so low I don’t count.(My other site traveling-thru-life.com has been found by Smut people, so I'm taking the comments off although I got a couple of good compliments from "Mental Health.")

Of course, if I pay the analyzer, they will amp up Wish on White Horses for me.

Well, I don’t believe you would be reading a really sucky blog, so it can’t be too bad.

Rewind back to Thursday before I reached into my purse and found my phone missing. I came home from a movie that had so much violence and CGI, I felt slimed, and so wanting to relate to a film that had sweetness and light,  I asked my daughter if she knew the lyrics to the Muppet song,” The Rainbow Connection.”

A portion of that song had been cycling through my mind for the last couple of days—you know how that can be, a song goes round and round in an endless loop:  “Have you been half-asleep, have you heard voices, I heard them calling my name…

“It's something that I'm supposed to be
“Someday we'll find it
“The rainbow connection
“The lovers, the dreamers, and me.”

The following morning after asking my daughter about the lyrics, I found a note sitting atop my computer:

“Why are there so many songs about rainbows?
“That’s part of what rainbows do.
“Rainbows are memories, sweet dream reminders. What is it you’d like to do?”

That was the refrain from the Muppet Movie.

Jason Mraz wrote the song, not Jim Henson as I thought. Henson aka Kermit the Frog sang it.

Isn’t it odd how when we get into a state such as I was after watching that Thursday movie, that we allow ourselves to go into a slump, and enter into its state instead of maintaining our own?

And then to add a big exclamation point at the end of my mood, I lose my cell phone.  What was that telling me? (“To not to?”)

Okay, all’s well. I ordered a new phone from  #eBay, and bought an intermediate TRAC phone so my grandson and I wouldn’t be without communication as well as no vehicle for a week.

I guess after insulting my phone by calling it a smart alec phone instead of a smartphone (it had stuttered and disconnected in the middle of a conversation), it decided to take off and leave me standing in the dust.

Back to the Muppets: Do you remember the old Jimmy Dean Television Show? Or was that before your time? You know of him, for you can still buy Jimmy Dean Sausages in the grocery store. Jimmy Dean first introduced Rowlf,  “I’m Rowlf, Rowlf the dog.” Rowlf was a wise-cracking big brown hairy dog who sat on a piano stool tickling the piano keys.

Jim Henson created Rowlf, and he and Frank Oz, performed the puppet on The Jimmy Dean Show. (The picture above is of Rowlf.)

Henson was so grateful for this break that he offered Dean a 40 percent interest in his production company, but Dean declined on the basis that he did nothing to truly earn it and Henson deserved all the rewards for his own work. For the rest of his life, Dean made it clear that he never regretted that decision of conscience.”

Henson took his love for puppetry and created an empire. See, people do love love, humor, and sweetness.

Muppets:
All of us watching, and wishing we'd find it;
Fozzie:
I've noticed, you're watching too.

I've heard it too many times to ignore it
It's something that I'm supposed to be
Someday we'll find it
The rainbow connection
The lovers, the dreamers, and me 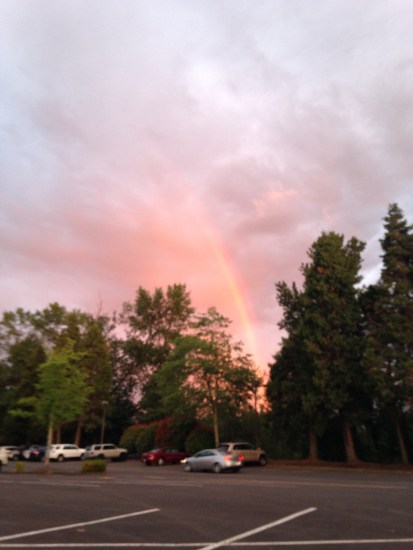 I must have seen a really good movie the day I came out of the theater to see this. The rainbow is in the eastern sky. The western sunset behind me is reflecting on it.