Let's Sift Through the Sludge and Find the Gold

There are many areas where that title applies.

One would be Thanksgiving. Remember how the pilgrims survived their first winter in the new land, raised their crops and with a bountiful harvest shared a feast? They needed a feast, the poor people were half starving. And so the story goes, they gave thanks, and invited their neighbors. Some of their neighbors happened to be the native peoples who lived on the land before they arrived. The Natives brought wild turkeys and corn, and thus introduced a tradition.

Few of us need a feast, but we do need to give thanks.

And now with Christmas coming up I want to find the gold, not follow a grumbling scenario:  “Oh yeah I need to cook for eight hours, eat for fifteen minutes, and clean up for seven days.”

I’m not doing it.

I want to find the gold.

The gold is to celebrate the great high holidays in a spirit of joy, gratitude, and glad tidings.

The winter celebration goes back Pre-Christian. The Winter Yule, the Solstice, marked the shortest day, longest night. Trees that stayed green all year held in high regard, and so people took evergreen branches into the house to remind them that life would spring again.

The peoples of Germany introduced the Tannerbnaum, that was they brought an entire evergreen tree into the house. Before that peoples built wooden pyramidal shaped frames and decorated it with branches. Martin Luther, inspired by the twinkling stars, is credited with placing candles on the Christmas frame.

Imagine the delight of a Christmas tree beaming with candles? I can feel the awe in my bones.

Stockings hung by the chimney with care.  So the story goes, a poor widower had three daughters. Because he could not afford a dowry, he believed his daughters would never marry and thus never be taken care of, but he would not accept charity. Saint Nickolas heard of his plight, and on Christmas Eve he slid down the chimney, and seeing the girl's stockings hanging by the chimney to dry, he filled them with gold coins.

The winter celebration has a long tradition, embellished often, and special to the peoples around the world.  When Jesus was introduced into it, it brought new meaning to the faithful. A child is born. The angels sing. And what did they sing? “Good Tidings to all, and Goodwill to all men.”

"Dear Mother, I am writing from the trenches. It is 11 o'clock in the morning. Beside me is a coke fire, opposite me a 'dug-out' (wet) with straw in it. The ground is sloppy in the actual trench, but frozen elsewhere. In my mouth is a pipe presented by the Princess Mary. In the pipe is tobacco. Of course, you say. But wait. In the pipe is German tobacco. Haha, you say, from a prisoner or found in a captured trench. Oh dear, no! From a German soldier. Yes a live German soldier from his own trench. Yesterday the British and Germans met and shook hands in the Ground between the trenches, and exchanged souvenirs, and shook hands. Yes, all day Christmas day, and as I write. Marvelous, isn't it?“

(Future nature writer Henry Williamson, then a nineteen-year-old private in the London Rifle Brigade, wrote to his mother, 1914)

Captain Robert Patrick Miles, King's Shropshire Light Infantry, recalled in an edited letter that was published in both the Daily Mail and the Wellington Journal & Shrewsbury News in January 1915:

We are having the most extraordinary Christmas Day imaginable. A sort of unarranged and quite unauthorized but perfectly understood and scrupulously observed truce exists between us and our friends in front. Of the Germans he wrote: "They are distinctly bored with the war...In fact one of them wanted to know what on earth we were doing here fighting them." )

One Christmas Eve night, a man riding home in his sleigh, emblazoned the story of Saint Nickolas aka Santa Claus, into our minds and hearts. This father wanted something to give his six children, so he scratched out the poem, ”A Visit from Saint Nickolas.” That was Clement Moore, and his poem has become known as “Twas The Night Before Christmas.”

In Moore’s poem, St. Nicholas was a “Right jolly old elf.” “He was dressed all in furs from his head to his foot, and his clothes were all tarnished with ashes and soot.”
“He went right to his work and filled the stockings, and laying a finger beside his nose and giving a nod, up the chimney he rose.“

And what did he call out as his sleigh pulled by eight tiny reindeer sailed off into the night sky?

“A Happy Christmas to all and to all a Good Night.”

The Miracle of the Dog and the Babe: 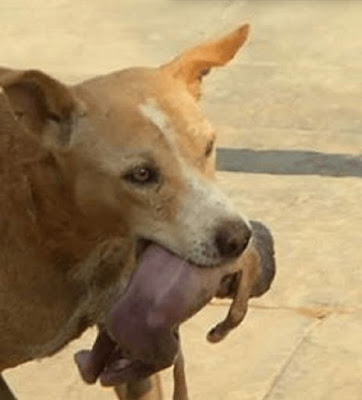 This was a homeless dog dumpster digging when he found a human infant with its umbilical cord still attached. The dog carried the baby about 100 feet and gave it to a human who rushed it to the hospital. The baby was not injured by the dog, and it survived.
Posted by Jo at 11:30 AM